Fans at Green and Gold Zone in West Allis told FOX6 News that they just want to see Rodgers back – and they want to win.

Packers coach Matt LaFleur confirmed Wednesday that Rodgers was in the protocol, but would not say if Rodgers had tested positive nor if Rodgers has been vaccinated. LaFleur acknowledged that Rodgers won't be available Sunday when the Packers (7-1) put their seven-game winning streak on the line at Kansas City (4-4).

"It was just crazy, man," Packers defensive tackle Kenny Clark said. "Got to have that next-man-up mentality. That’s the leader of our team, so yeah, it was just crazy news."

NFL officials are planning to review how the Packers have handled COVID-19 related protocols.

"The primary responsibility for enforcement of the COVID protocols within club facilities rests with each club," NFL spokesman Brian McCarthy said in a statement. "Failure to properly enforce the protocols has resulted in discipline being assessed against individual clubs in the past. The league is aware of the current situation in Green Bay and will be reviewing with the Packers."

Before the NFL issued its statement, LaFleur defended the way the Packers have followed health protocols within their facility.

"I watch what these guys do," LaFleur said. "You know, I can only speak to our football space, but yeah, absolutely. We’ve got cameras everywhere. I think our guys do an outstanding job with it. And it’s just unfortunate. It’s not like this thing can’t happen to anybody. It’s happened to a lot of people outside of this building."

LaFleur didn’t speculate on how long Rodgers might be out.

Rodgers isn't the only Packers player to deal with the coronavirus recently. Wide receivers Davante Adams, a 2020 All-Pro, and Allen Lazard missed last week’s victory at Arizona because of COVID-19 protocols.

The Packers placed both Rodgers and cornerback Isaac Yiadom on the reserve/COVID-19 list Wednesday.

"It’s going around, and it happens," running back Aaron Jones said. "I’ve had COVID. Many others in the locker room have had COVID. It’s just unfortunate."

Green Bay’s backup quarterback is 2020 first-round draft pick Jordan Love, who has thrown seven passes in his short career. The third-stringer, Kurt Benkert, is on the practice squad but was placed on the COVID-19 reserve list on Tuesday. That leaves Love as the lone available quarterback on Green Bay's roster, at least for now.

Defensive coordinator Joe Barry tested positive last week and also missed the Cardinals game. LaFleur said he’s hopeful that Barry and Adams will both be back at practice Thursday.

Love’s lone regular-season game appearances came when he played the fourth quarter of a 38-3 season-opening loss to New Orleans, and took three kneel-downs at the end of a 35-17 victory over Detroit. LaFleur said Love has been working primarily with the scout team since the start of the season.

LaFleur says he liked the way Love responded to the likelihood of starting Sunday's game.

"We talk about having that no-flinch mentality and I didn’t see any flinch in him," LaFleur said. "I think he’s excited about the opportunity. I think he’ll prepare the right way and give it everything he has."

Love will try to lead his team to victory in his first career start, something Dallas' Cooper Rush and the New York Jets' Mike White both did last Sunday. Chiefs coach Andy Reid was quick to point that out Wednesday.

"You just watched this last weekend," Reid said. "Two quarterbacks came in that hadn’t had an opportunity to play much, if at all, and won games. So, our guys are aware of that. You get yourself ready to play." 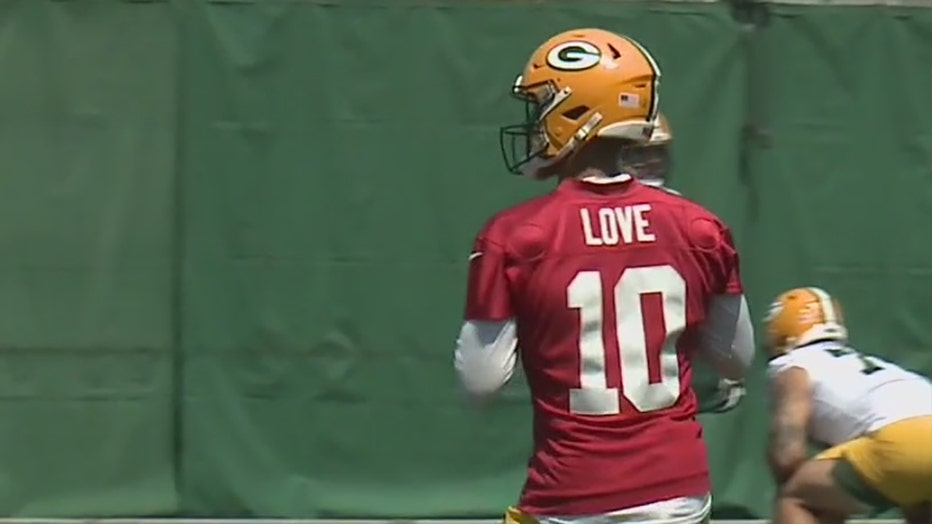 Rodgers was asked at an Aug. 26 media session whether he had been vaccinated.

LaFleur would not comment on Rodgers' Aug. 26 use of the "immunized" and if it might be seen as misleading if the quarterback was unvaccinated.

"That’s a great question for Aaron," LaFleur said. "I’m not going to comment on it."

Jones, whose father died April 6 from of complications from COVID-19, declined comment on Rodgers' vaccination status. But the Pro Bowl running back added he wouldn't consider it selfish if a teammate opted against getting vaccinated.

"I don’t think it’s a selfish decision," Jones said. "I mean, there’s guys across the league who are not vaccinated. And to say that they’re not committed to their team, I think that that’s not true. He’s our leader ... he’s 100% committed to this team, just like anybody else is in this locker room."

Green Bay owns a 3 ½-game lead over the Minnesota Vikings (3-4) in the NFC Central, giving the Packers a nice cushion as they deal with their quarterback's absence.