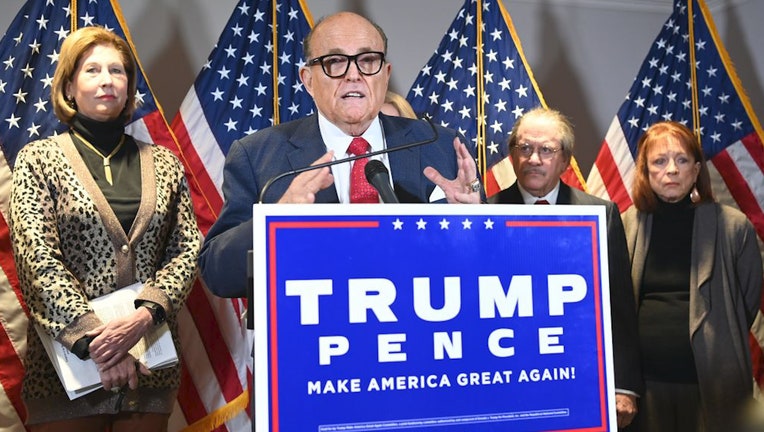 YouTube "issued a strike against the Rudy W. Giuliani channel, which temporarily restricts uploading or live-streaming," according to an emailed statement from YouTube.This will reportedly be Giuliani’s second strike within 90 days, which means no new content can be posted or live-streamed from the channel for up to two weeks, according to YouTube’s strike system guidelines.

Giuliani has been a boisterous voice when speaking on baseless claims of voter fraud in the 2020 presidential election, and with his outspoken stance came lawsuits.

The lawsuit seeks more than $1.3 billion in damages for the voting machine company, a target for conservatives who made up wild claims about the company, blaming it for Trump’s loss and alleging without evidence that its systems were easily manipulated.

Dominion is one of the nation’s top voting machine companies and provided machines for the state of Georgia, the critical battleground that President Joe Biden won and which flipped control of the U.S. Senate.

Trump has yet to prevail in court despite the many lawsuits he and the GOP have filed in several states.

There was no widespread fraud in the election, which a range of election officials across the country — including Trump’s former attorney general, William Barr — confirmed. Republican governors in Arizona and Georgia, key battleground states crucial to Biden’s victory, also vouched for the integrity of the elections in their states.

Nearly all of the legal challenges to the election from Trump and his allies have been dismissed by judges, including two tossed by the Supreme Court, which includes three Trump-nominated justices.

"Dominion brings this action to set the record straight, to vindicate the company’s rights under civil law, to recover compensatory and punitive damages, and to stand up for itself, its employees, and the electoral process," the lawsuit read.

Florida-based Smartmatic USA is also taking out one of the largest libel suits ever against Giuliani and several news media hosts.

Smartmatic USA is suing for $2.7 billion, charging that the defendants conspired to spread false claims that the company helped "steal" the U.S. presidential election.

The company stated the effects of the negative publicity were swift and devastating, the complaint alleges. Death threats, including against an executive’s 14-year-old son, poured in as Internet searches for the company surged, Smartmatic claims.