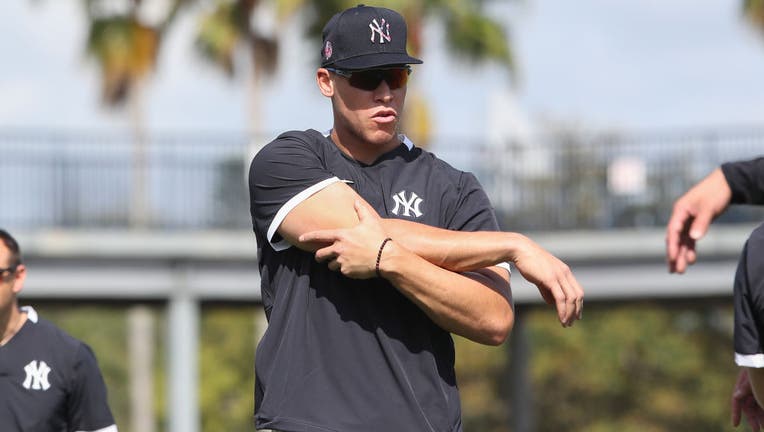 Judge did not play in any spring training games because of discomfort in his right pectoral muscle and shoulder that he felt when swinging. The Yankees said March 6 that the 2017 AL Rookie of the Year had a stress fracture to his first right rib, an injury likely dating from a diving catch late last season.

“Aaron is still in the healing phase of that that rib bone, and I think he'll be reevaluated again in a few weeks as far as re-imaging that to see if there's the continued healing with that rib,” manager Aaron Boone said during a conference call Wednesday. “He's been able to work out doing a lot of lower body stuff, is able to do some some upper body stuff, some overhead things.”

Judge revealed last week he also had a collapsed lung and said he has recovered from that. Boone said that injury likely occurred during the diving catch but “it's probably something that it's impossible to know for sure.”

Judge is among about 10 players who have remained at the Yankees spring training complex in Tampa, Florida.

Slugger Giancarlo Stanton has recovered from the strained right calf sustained during defensive drills on Feb. 26. New York's opened had been scheduled for Thursday at Baltimore before the Major League Baseball schedule was pushed back due to the new coronavirus. The season won't start until mid-May at the earliest.

“He's pretty much over the hump,” Boone said. “He's pretty much run aggressively and done the things necessary so that if and when, say, we're to begin spring training games, he would he would likely be ready to roll for that.”

Boone believed Stanton also was in Tampa. Center fielder Aaron Hicks, recovering from Tommy John surgery on his right elbow on Oct. 31, is working out near his home in Phoenix and has started a throwing program. He is expected to be ready to play in the summer.

Left-hander James Paxton is home in Eau Claire, Wisconsin, and he is continuing his throwing program. Paxton is expected back in late May or June following surgery Feb. 5 to repair a herniated disk in his back and to remove a cyst.

New York's grounds crew returned to the minor league complex on Wednesday for the first time since March 13 and resumed mowing and other maintenance. They used a shared parking lot with the Tampa Bay Buccaneers' Raymond James Stadium, where coronavirus testing started Wednesday.