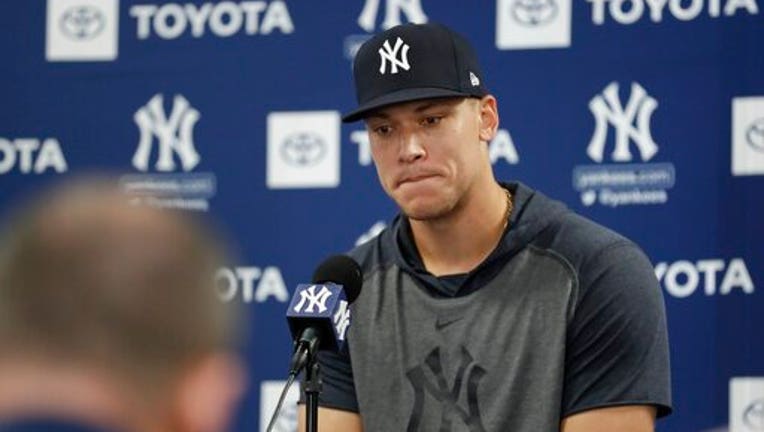 TAMPA, Fla. (AP) — New York Yankees slugger Aaron Judge has a broken rib and it's not clear whether he will need surgery, leaving doubt when he'll be back in the lineup.

Judge will rest two weeks while recovering from the stress fracture to his first right rib. He hasn't played in any spring training games while dealing with soreness in his right pectoral muscle and shoulder.

Judge underwent around a dozen tests, including and MRI plus CT and bone scans, to determine the source of his pain.

“It shows signs of healing so we're going to give it the next couple and re-test to show how much healing is going on with that rib," Boone said.

Removal of the bone is a possibility depending on the healing process.

“I wouldn't say that's off the table, but you wouldn't want to go do that right now especially if the bone is healing,," Boone said.

Since winning the 2017 AL Rookie of the Year award, Judge has been limited to 112 games in 2018 because of a broken right wrist and to 102 games last year due to a strained left oblique.

Two other Yankees outfielders already were sidelined. Giancarlo Stanton strained his right calf on Feb. 26 during defensive drills and will miss opening day on March 26. Center fielder Aaron Hicks had Tommy John surgery on his right elbow on Oct. 31 and is not expected back until summer.

New York also starts the season without three of its top five starting pitchers. Right-hander Luis Severino will missing the season following Tommy John surgery on Feb. 27; left-hander James Paxton is likely out until late May or June following surgery to repair a herniated disk in his back and to remove a cyst; and right-hander Domingo Germán must serve the final 63 games of an 81-game suspension for violating Major League Baseball's domestic violence policy. He is eligible to return June 5, barring any postponements.