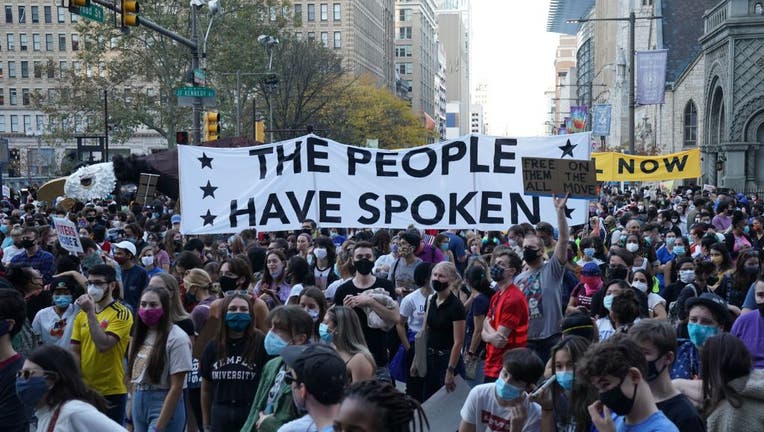 The news elicited cheers in an Italian coffee bar, encouraged protesters outside the house of Israel's prime minister, drew mixed reviews in Iraq and inspired disbelief in Slovenia, the homeland of first lady Melania Trump.

But relief was a common theme expressed in many parts of the world to the news that Trump’s reelection bid failed.

“Welcome back America !” tweeted the mayor of Paris, Anne Hidalgo.

Congratulations poured in for Biden from world capitals, including in nations governed by leaders who got along with Trump, essentially ignoring his claims that the divisive election race wasn't over.

“The Americans have chosen their President. Congratulations @JoeBiden and @KamalaHarris! We have a lot to do to overcome today’s challenges. Let’s work together!” tweeted French President Emmanuel Macron.

British Prime Minister Boris Johnson, another Trump ally, hailed Biden's victory and the “historic achievement” of Kamala Harris' election as the first Black woman vice president, Johnson said he looked forward to “working closely together on our shared priorities, from climate change to trade and security.”

Word of the victory in Pennsylvania that pushed Barack Obama’s former vice president past the threshold of 270 Electoral College votes needed to take over the Oval Office cascaded around the globe on social media and live news broadcasts, sparking celebrations in some places and bitter memories elsewhere.

The Trump administration imposed unprecedented sanctions on Iran after withdrawing from Tehran’s nuclear deal with world powers in 2018, crippling the country’s economy. Tensions between the countries reached a fever pitch with the killing of Soleimani in January.

Hesameddin Ashena, an adviser to Iranian President Hassan Rouhani, wrote on Twitter that the “Iranians have stood steadfastly until that coward’s time came to leave.” Biden has suggested he would return to engagement with Iran.

Despite having gotten along well with Trump, India's prime minister posted a photo of himself with Biden and sent congratulations for “your spectacular victory!”

“I look forward to working closely together once again to take India-US relations to greater heights,” Modi said.

He also congratulated Vice President-elect Harris in a separate tweet for her “pathbreaking” success and said her win is a “matter of immense pride” for all Indian-Americans.

Harris’ late mother was from India. Kamala is Sanskrit for “lotus flower,” and Harris gave nods to her Indian heritage throughout the campaign.

Her election struck an immediate chord internationally. It inspired calls in parts of Africa for governments long run by men to think again.

“The time has also come to give our women the chance to occupy such a high office in our country and even the number one position,” tweeted a Nigerian Cabinet minister, Festus Keyamo.

There was widespread relief from scientists and environmental campaigners at Biden’s win. The Democratic candidate said during his campaign that he planned to take the United States back into the Paris climate accord that Trump withdrew from.

The Potsdam Institute for Climate Impact Research said that if Biden and Harris put the United States on course to reduce its greenhouse gas emissions to zero by mid-century, it would help avert some of the disastrous consequences of global warming.

“Clearly, the American people see this, and chose unity above conflict and facts above fiction – so the US can really become great again," the institute’s co-director, Johan Rockstrom, said in a statement.

Western allies quickly looked forward to a fresh start with a new administration in Washington.

“We’re looking forward to working with the next U.S. government,” German Foreign Minister Heiko Maas tweeted. “We want to work in our cooperation for a new trans-Atlantic beginning, a New Deal.”

Slovenian Prime Minister Janez Jansa, who was the only world leader who congratulated Trump even before all the votes were counted, continued in his support of the incumbent.

He tweeted, in Slovenian: “Interesting. The complaints were launched in all American states with tight results. The courts didn’t even start deliberating. Still, the leading media (and not some official body) are proclaiming the winner. Congratulations from all sides. That’s what you call the rule of law.”

AP journalists around the world contributed.