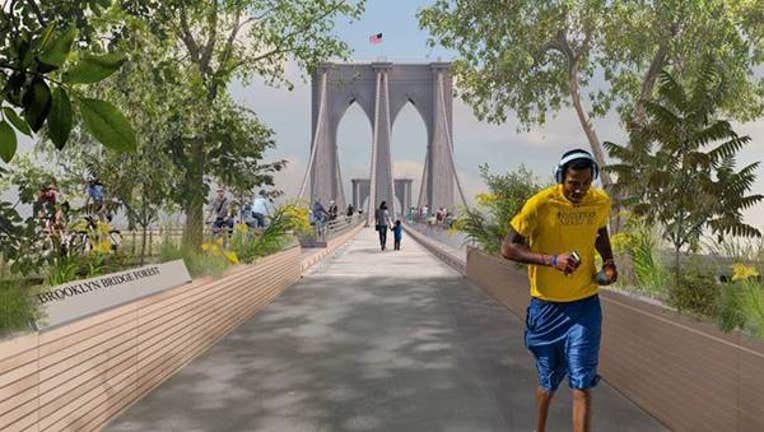 NEW YORK - It may be much more than just a tree that grows in Brooklyn.

The winners of an international design contest to reimagine the Brooklyn Bridge have been announced and the Pilot Projects Design Collective took the top spot with their “Brooklyn Bridge Forest” proposal.

The design reimagines the bridge by adding “microforests” at either end of the bridge to bring nature and biodiversity to New York City, along with expanding the bridge’s wooden walkway using sustainably harvested wood from Guatemala and adding a dedicated bike path to create space for cyclists.

The project would also help New York City meets its commitment to an “80x50” plan, to cut its emissions by 80 percent by 2050.

“We are thrilled by this victory for healthier cities and the global environment!” said Scott Francisco, founder of Pilot Projects Design Collective. “Brooklyn Bridge Forest is a new kind of urbanism designed to help NYC engage community stakeholders, quickly implement a series of highly visible and impactful changes that will support active transit and connect New York City and its residents to forests and natural systems that sustain life for all. Our team is ready and excited to help New York City reach its full potential for an optimistic and restorative future.”