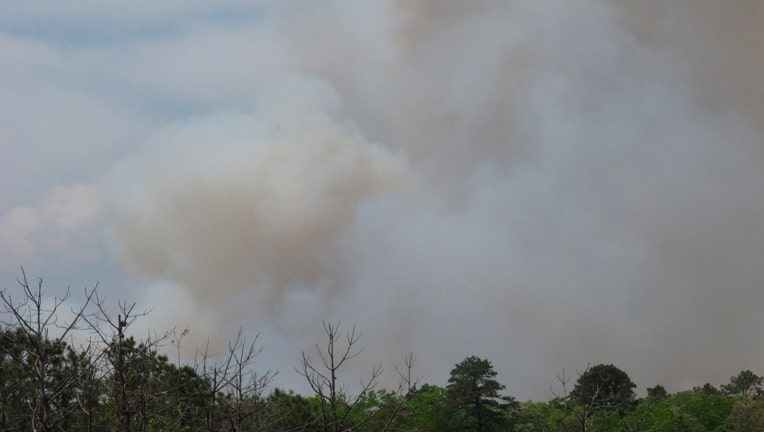 NEW JERSEY - Firefighters were making progress Monday against a forest fire that had burned hundreds of acres in the New Jersey Pinelands, although winds that began picking up in the afternoon were causing concern.

As of early afternoon, the state Department of Environmental Protection said the fire encompassed 617 acres in and around Little Egg Harbor Township, a rural, heavily wooded area of the Pinelands about 20 miles north of Atlantic City.

Earlier in the day, authorities said the fire had burned about 1,000 acres. No injuries were reported.

The fire was 75% contained as of Monday evening, according to the New Jersey Department of Environmental Protection.

On the aptly named Ash Road just over the border in Bass River Township, Dan and Jennifer Columbo sat on their front porch and watched the mountains of smoke billow nearby. Jennifer's daughter went to a local school to evacuate with a small child Sunday night, but the Columbos remained at their home, uneasily watching the blaze.

"I got concerned because we have a lot of pine needles in the yard," Dan Columbo said. "There was this big orange glow up above the treetops and a lot of smoke, and it was concerning. The wind is picking up now and that's something to watch, too."

The fire was spotted around 4 p.m. Sunday from a fire watch tower in the Bass River State Forest in Little Egg Harbor Township, according to the New Jersey Forest Fire Service. Agency officials said the blaze is burning inside a large area in Burlington and Ocean counties that has limited accessibility.

The agency said crews worked through the night to set containment barriers, using bulldozers and lighting so-called "backfires" in strategic locations, including the edge of roadways, to burn flammable material on the ground and thus deny the larger fire fuel to spread more widely.

Some area roadways are closed due to heavy smoke and other related issues, but Route 9, one of the state's most heavily traveled north-south routes near the coast, was open again on Monday.

The cause of the fire was not immediately known.