A massive cargo ship is stuck sideways in the Suez Canal in Egypt, blocking all traffic in one of the world's busiest water crossings.

At more than 1,300 feet long and more than 200,000 tons, the ultra-large container ship Ever Given, now stuck lengthwise across the Suez Canal, is as long as the Empire State Building is tall (not including its world-famous spire) and twice as heavy as the largest American aircraft carrier.

"[That's] what makes this really unique and unparalleled," Campbell University history professor and former merchant mariner Dr. Sal Mercogliano said. "I sailed for seven years, so I've been through the ditch three times."

Completed in 1869, the Suez Canal connects the Meditteranean Sea to the Red Sea and sees 30% of the planet's container ship traffic and 10% of the world's commerce pass through it every day.

"Fifty ships a day," Mercogliano said. "The Egyptians get $700,000 on average for every ship going through the canal."

But since around 2 a.m. Eastern time Tuesday, zero ships have passed through the canal thanks to the skyscraper of a ship wedged across it, as 50 new vessels every day add to the traffic jam of massive container ships and tankers backed up into the Isthmus of Suez, delaying shipments and choking the supply of any number of things, creating many-tens-of-millions-of-dollar economic ripples around the globe and forcing shipping companies to consider rerouting their vessels around Africa. 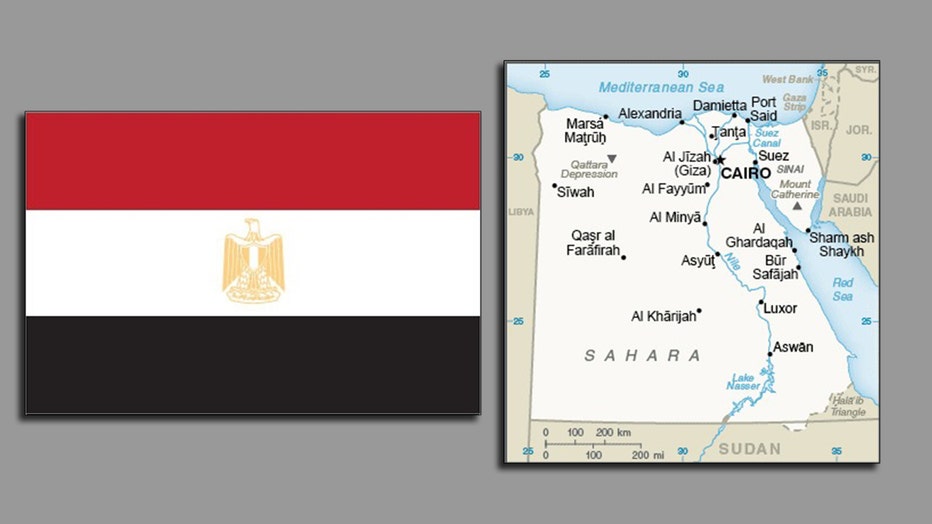 The flag of Egypt and a map of the country. (CIA World Factbook)

If investigators find the Ever Given crashed into the east bank of the canal at full speed due to a human or mechanical error that falls on the operating company, then it might find itself liable for damage to the vessel, the canal, and all the money lost due to the closure by every company on the planet.

"You could literally bankrupt the seventh-largest container shipping line in the world out of Taiwan right now," Mercogliano said.

Closed just twice before, during the Suez Crisis of 1956 and for eight years after the Six Days War, the canal added passing lanes to accommodate ships of this size.

"She's in the one area where it's a single lane," Mercogliano said.

A team of tugboats failed to move the Ever Given during high tide Wednesday. Mercogliano expects the vessel's 18-man crew to soon start lightening the vessel by taking off fuel and water, as what he called the "long and arduous day" of a successful canal passage dragged on into day three.

"[It's] 99% boredom with 1% sheer terror when things go badly," Mercogliano said, "and that's exactly what happened with the Ever Given."