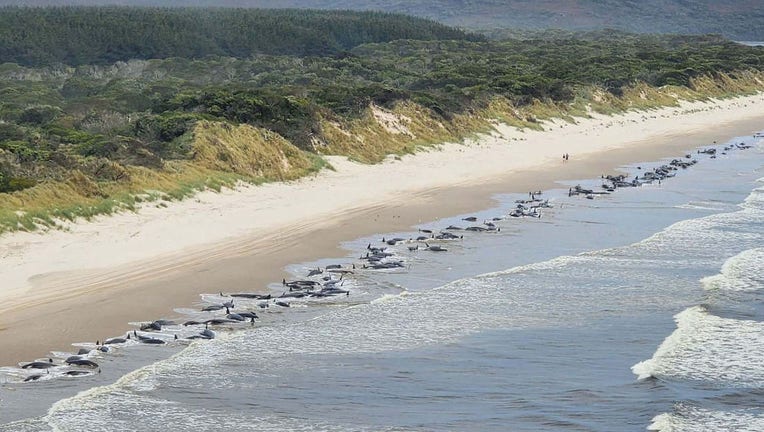 This handout image supplied by NRE Tas shows an aerial view of a mass whale stranding near Macquarie Heads on September 21, 2022, in Strahan, Australia. (Photo by NRE Tas via Getty Images)

Rescue efforts were underway in Australia after more than 200 whales were stranded on an Australian beach.

The pod stranded on Ocean Beach, located on Tasmania’s west coast, appears to be pilot whales, the Department of Natural Resources and Environment Tasmania said Wednesday. At least half are presumed to still be alive, officials said.

The stranded whales came just days after 14 sperm whales were found beached on an island off the southeastern coast.

An area resident told the Australian Broadcasting Corp. that the whales were visible near the entrance to Macquarie Harbour and described the Ocean Beach stranding as a "massive event."

A team from the Marine Conservation Program was assembling whale rescue gear and heading to the area, which is remote and a long walk from roads, officials said. The public was urged to stay clear of the area.

In this handout image provided by Huon Aquaculture, whales are seen beached along the shoreline on September 21, 2022, in Strahan, Australia. Hundreds of whales pilot have become stranded at Macquarie Harbour on Tasmania's west coast in a mass stranding event. (Photo by Huon Aquaculture via Getty Images)

"Whales are a protected species, even once deceased, and it is an offense to interfere with a carcass," the environment department said.

Griffith University marine scientist Olaf Meynecke said it's unusual for sperm whales to wash ashore. He said that warmer temperatures could also be changing the ocean currents and moving the whales’ traditional food.

"They will be going to different areas and searching for different food sources," Meynecke said. "When they do this, they are not in the best physical condition because they might be starving so this can lead them to take more risks and maybe go closer to shore."

Videos captured the moment when a breaching whale landed on the bow of a small boat off of Plymouth, Massachusetts, on July 24, 2022. No injuries were reported and the boat wasn't seriously damaged. Credit: Ted Gardziel via Viralhog and Leo Enggasser/Amazing Animals+/TMX

Fourteen sperm whales were discovered Monday afternoon on King Island, part of the state of Tasmania in the Bass Strait between Melbourne and Tasmania’s northern coast. The department said it is not unusual for sperm whales to be sighted in Tasmania.

The pilot whale is notorious for stranding in mass numbers, for reasons that are not entirely understood.

Two years ago, about 470 long-finned pilot whales were found beached on sandbars off Tasmania’s west coast in the largest mass-stranding on record in Australia. After a week long effort, 111 of those whales were rescued but the rest died.

Watch: Breaching whale jumps out of ocean and lands on top of a Massachusetts fishing boat