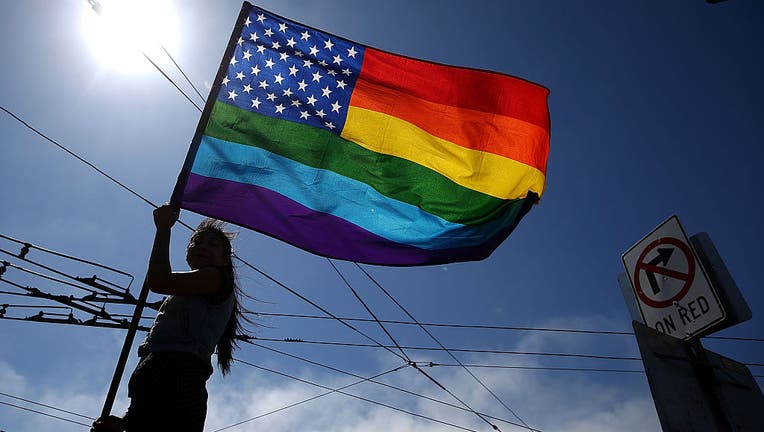 SAN FRANCISCO - The rainbow flag is known around the world as a symbol of LGBTQ Pride.

But there are also multiple variations representing different queer communities that you may not be familiar with.

The traditional rainbow flag has also undergone multiple evolutions through the decades to be more inclusive.

Here is your guide to some of the many different Pride flags and what they mean. 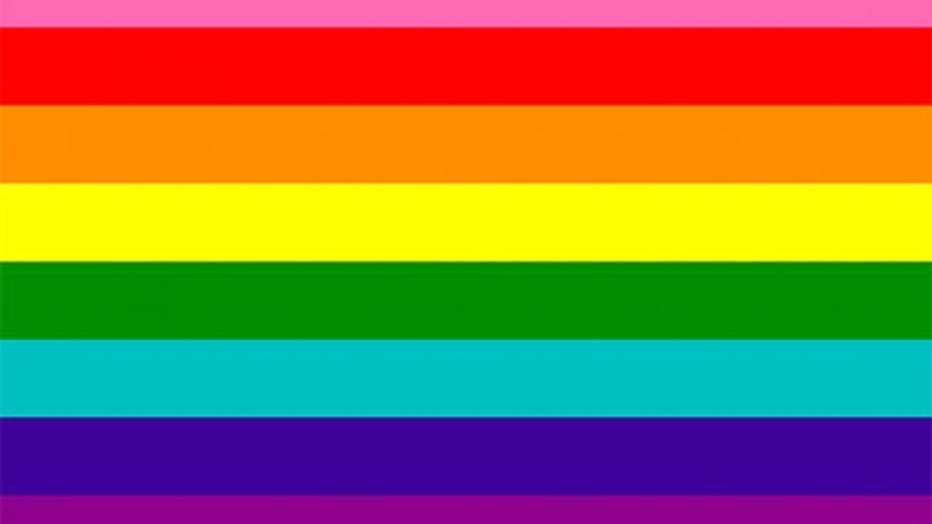 In 1978, artist and gay rights activist Gilbert Baker designed this rainbow flag as a symbol of pride for the gay community. It's since become a worldwide symbol of LGBTQ Pride. Each color celebrates an aspect of queer Pride: 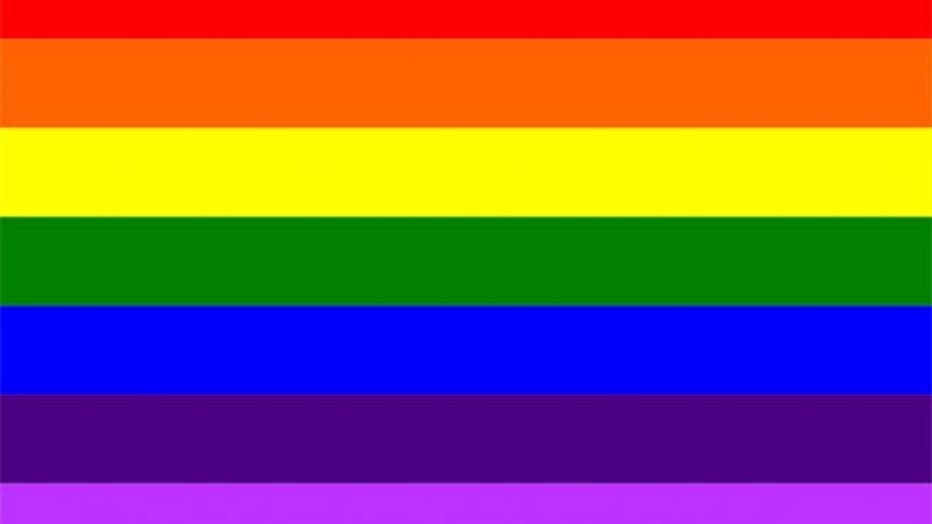 Gilbert Baker referred to this version of his original Pride flag as the "commercial" iteration, because it was produced without the hot pink stripe due to a shortage of fabric in that color at the time.

Demand for the Pride flag also surged after the 1978 assassination of Harvey Milk, contributing to the supply shortage. 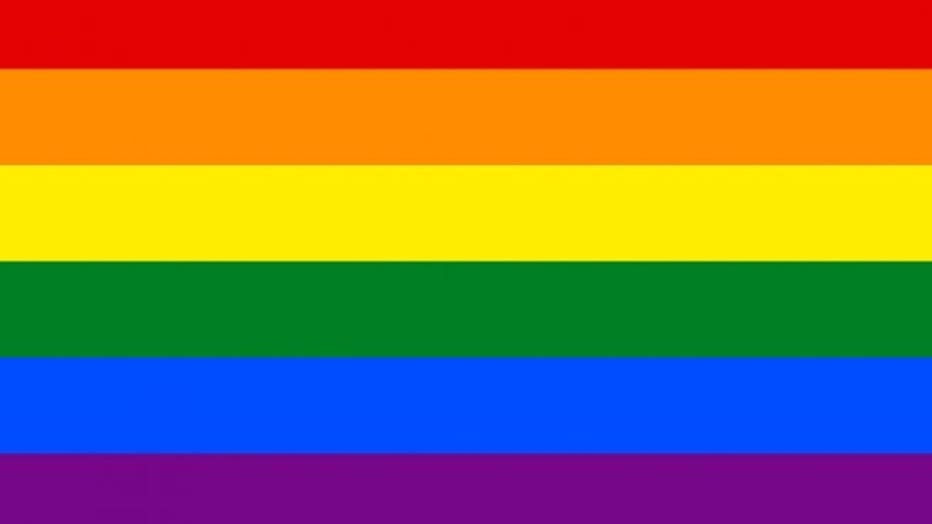 In 1979, the six-colored flag became a common version hung around San Francisco. Having an odd number of colors led to turquoise being dropped. It may be the most recognizable iteration of the Pride flag. 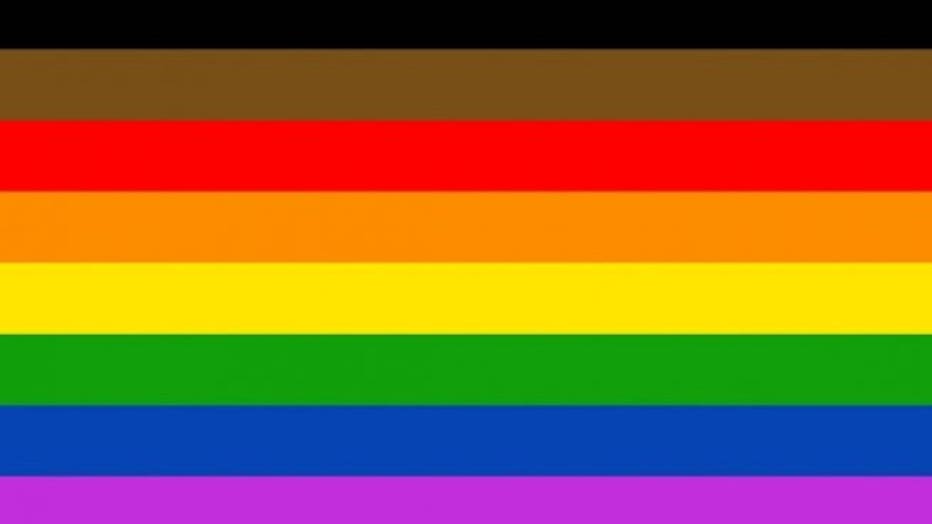 In 2017, the city of Philadelphia added black and brown to the six-color Pride flag to be more inclusive of the queer people in communities of color who are often not fully included in the LGBT community. 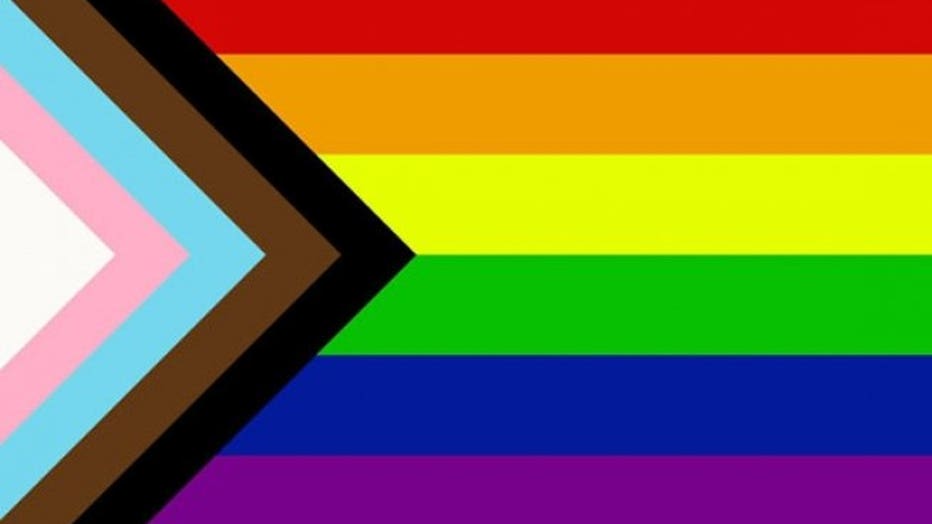 Taking the Philadelphia Pride flag one step further, the following year the Progress Pride flag was designed to add a chevron featuring black, brown, blue, pink, and white stripes to symbolize the inclusion of marginalized communities of color, trans people, and those living with or who have died from HIV/AIDS. The chevron arrow shape represents moving forward and making progress in the community.

Inspired by another symbol of bisexuality (two overlapping pink and blue triangles), this flag represents the intersection of traditionally male and female colors.

The pink represents women-identifying people, yellow is for non-binary and gender-nonconforming people, and the blue is for male-identifying people. The pansexual Pride flag surfaced on the internet around 2010, according to Pride.com, as a way to distinguish the community from bisexuality. It brings visibility to pansexual people who have romantic attractions with people of different genders and sexualities. 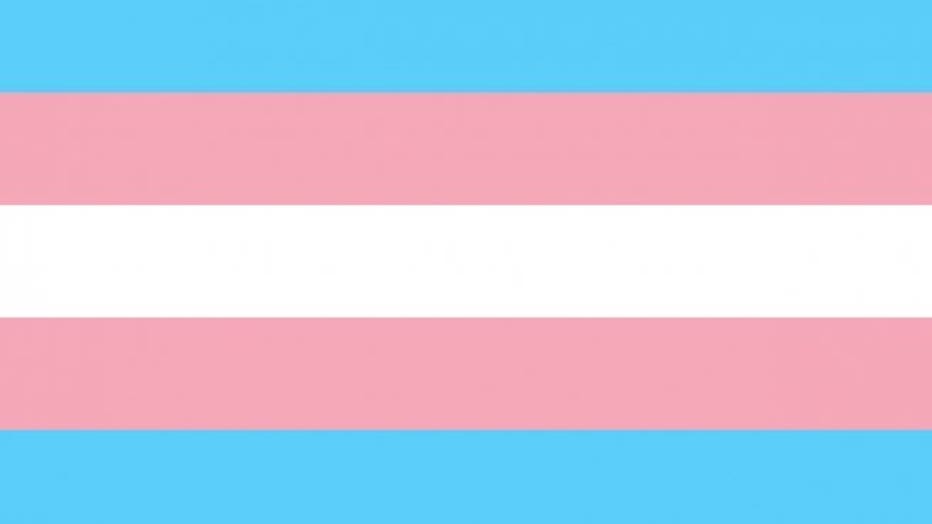 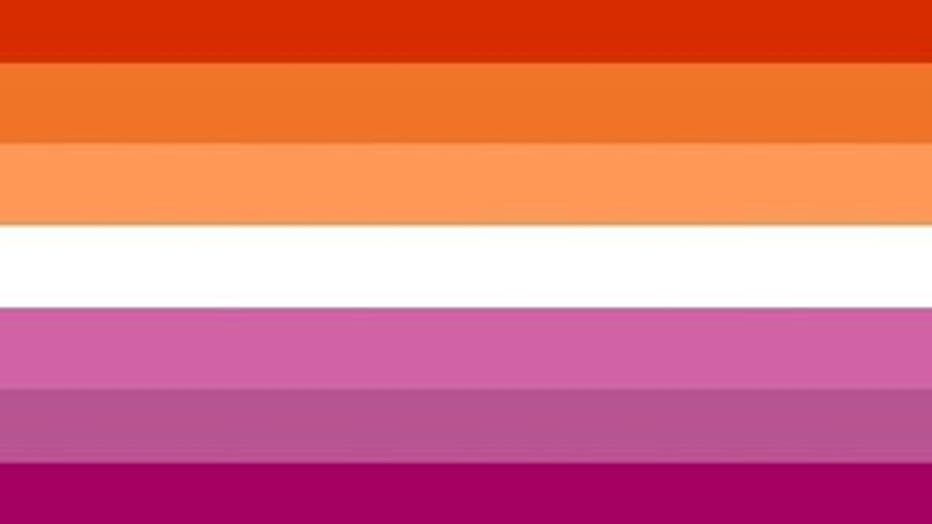 There have been various iterations of flags representing different parts of the lesbian community. The "pink" lesbian Pride flag has six shades of red and pink colors with a white bar in the middle. Sometimes the flag is displayed with a red kiss to represent "lipstick lesbians" but was not as widely adopted. There are also other variations of the lesbian flag, including ones for butch lesbians and labrys lesbians.

Unlike pansexuals, polysexual people are attracted to multiple genders but not all genders. The colors and design of the flag are based off the bisexual and pansexual flags. It borrows the blue and pink, and replaces the purple and yellow stripes with a green one to represent attraction to people who identify outside the traditional male-female binary.

The intersex Pride flag was designed by Morgan Carpenter of Intersex Human Rights Australia in 2013.  It uses the colors yellow and purple instead of the gendered colors of pink and blue. The unbroken circle represents the wholeness of intersex people, who are born with reproductive or sexual characteristics outside of the socially constructed definitions of female or male. 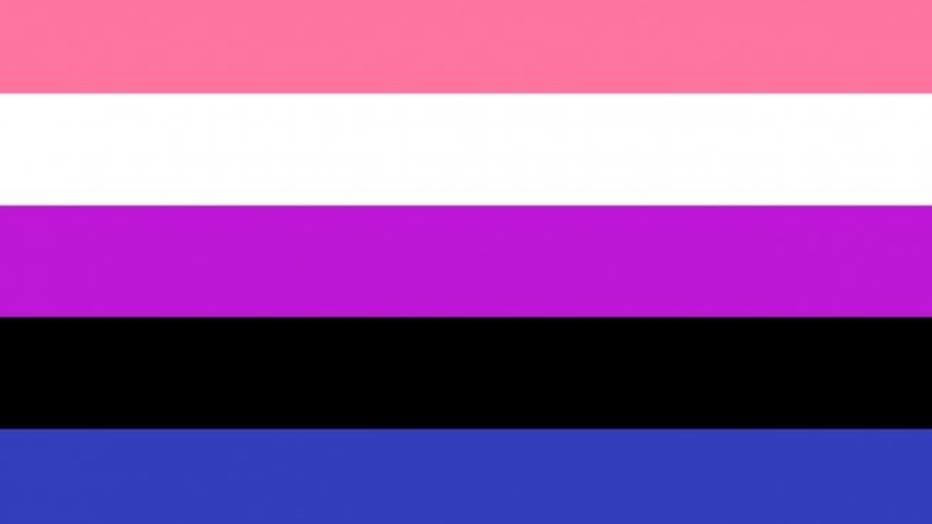 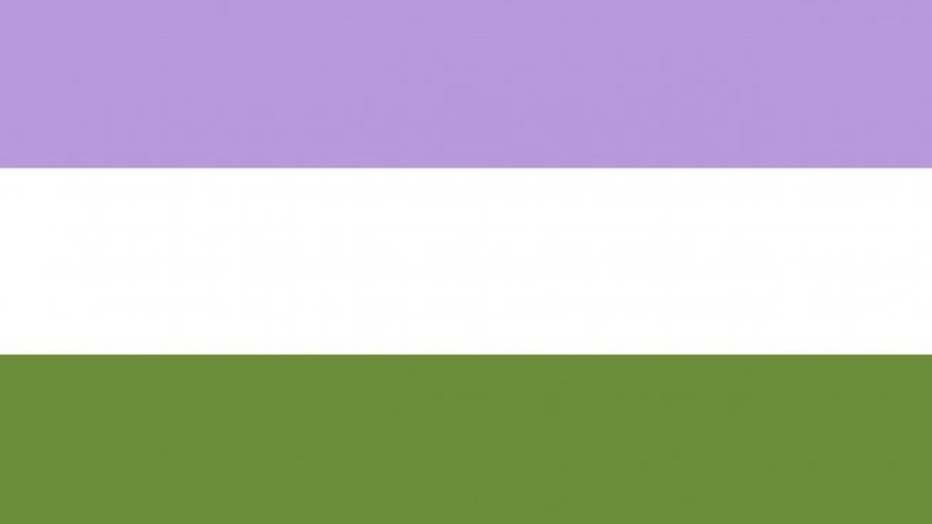 Designed in 2011 by Marilyn Roxie, the flag was made to create visibility for the genderqueer and non-binary communities. According to Roxie, lavender represents a mix of gendered colors, pink and blue. White is for agender individuals. And dark chartreuse is "the inverse of lavender; meant to represent those whose identities which are defined outside of and without reference to the binary." 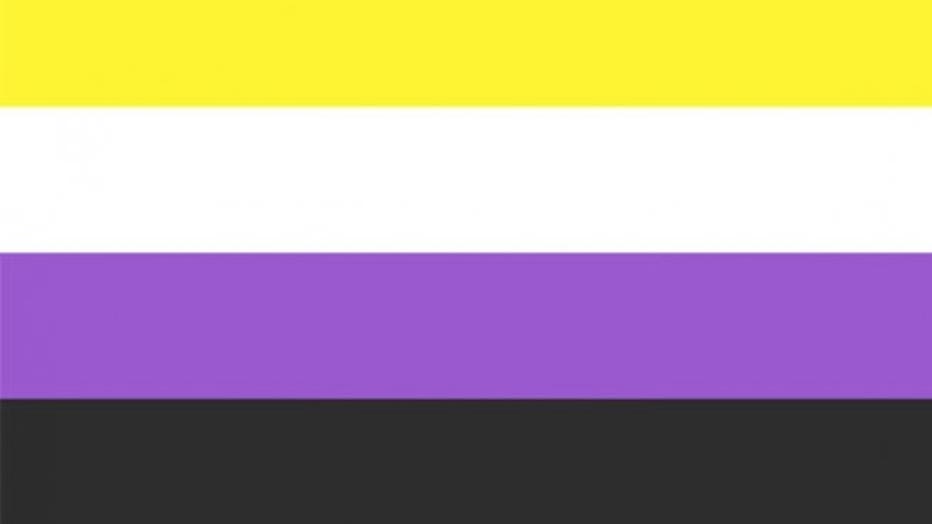 This flag was created in 2014 by 17-year-old Kye Rowan to fly alongside the genderqueer flag as a symbol of non-binary people who felt they do not fit into the traditional male-female gender binary. The yellow symbolizes gender outside a binary. White represents those with many or all genders. Purple represents people who are both binary male and female or fluid between them. And black is for the agender community. 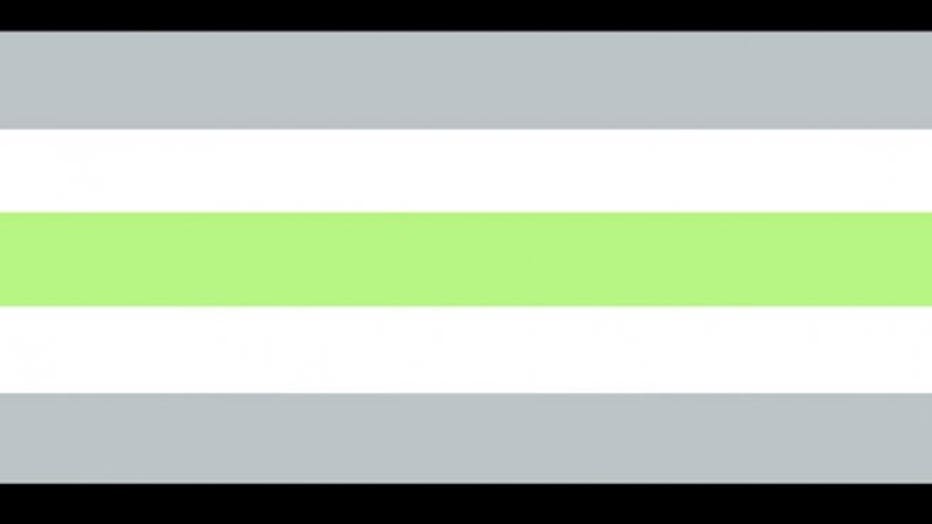 The agender Pride flag created in 2014 has seven horizontal stripes. The black and white stripes represent an absence of gender, the gray represents semi-genderlessness, and the central green stripe represents non-binary individuals.