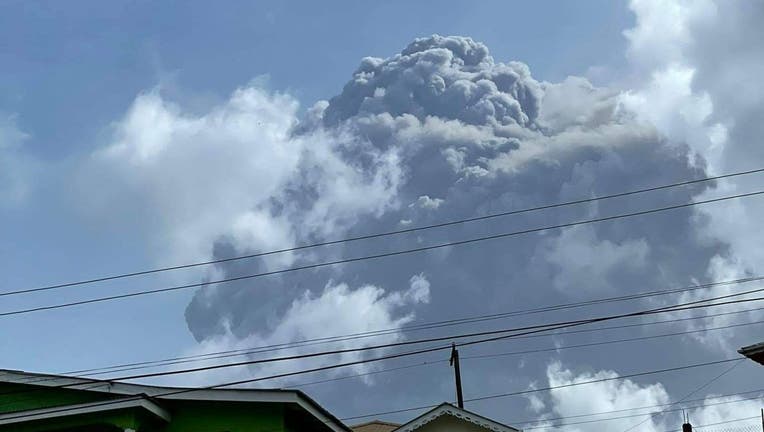 Ash plumes from explosive eruption rocketed up 20,000 feet and were headed to the east, the country's National Emergency Management Organization tweeted Friday.

The University of the West Indies (UWI) Seismic Research Centre wrote in their own post that the explosive eruption occured at  8:41 a.m. AST.

"Ash has begun to fall on the flanks of the volcano and surrounding communities including Chateaubelair and Petite Bordel. Some has gone offshore and has even reached the Observatory," they wrote alongside a set of photos showing the ash plumes.

Officials tweeted that the dome of the volcano in the island’s northern region could be seen glowing overnight.

On Thursday, they said that approximately 16,000 residents live in the "red zone" and would need to be evacuated either aboard cruise ships, to nearby islands or sheltered elsewhere in St. Vincent outside the red zone.

However, the COVID-19 pandemic has complicated the efforts, and St. Vincent Prime Minister Ralph Gonsalves told reporters in a news conference that those seeking refuge aboard a cruise ship or another island would have to be vaccinated.

He also said that he was talking to Caribbean governments to accept people’s ID cards if they don’t have a passport. The islands of St. Lucia, Grenada, Barbados and Antigua said they would accept evacuees.

"This is an emergency situation, and everybody understands that," Gonsalves said, adding that those who opt to go to a shelter in the island chain of St. Vincent and the Grenadines also be vaccinated.

"I don’t want you panicked," he instructed. "That is the worst thing to do."

Two Royal Caribbean cruise ships and two Carnival cruise ships are expected to arrive by Friday, and emergency management teams have been providing transportation to safer locations, including predetermined shelters.

In an email, Carnival told Fox News on Friday that its ships would arrive Friday afternoon and that each ship will accommodate as many as 1,500 residents who will be taken to neighboring islands.

"All precautions will be taken to protect the health and safety of Carnival crew and the passengers who board the ships," they assured.

This comes after days of seismic activity recorded in the area and after the volcano had an effusive eruption in late December.

An effusive eruption is dominated by the outpouring of lava onto the ground, while explosive eruptions are characterized by violent fragmentation, according to the U.S. Geological Survey.