The NYPD shared video of three suspects wanted for a string of robberies including one inside a subway station where the victim was forced to transfer money from his cell phone.

NEW YORK - The NYPD was searching for three suspects wanted in a string of robberies including once inside a subway station where the victim was forced to transfer money from his cell phone.

On Sept. 18 at about 10:20 p.m., the suspects approached a 14-year-old boy on Stillwell Avenue in Coney Island and pulled him off his bicycle, said cops. The teen chased after the suspects who then took his iPhone 11 and wallet. The boy was not injured.

At 5 a.m. the following morning, the suspects approached a 28-year-old man inside the Park Place subway station. One of the suspects told the man he was carrying a gun inside a fanny pack. The suspects then took the victim's iPhone 12 Pro, iPhone 10XR and debit cards. Video showed the suspects leaving the station including with one of them riding the bicycle stolen the night before, said police.

On Sept. 19 at 5:15 a.m. inside the Chambers Street Station, the suspects approached a 21-year-old man when one of them opened a fanny pack and took out a gun. The suspect told the victim, "Don't run or I'll shoot you" before they demanded he log into his bank account and transfer $3,500 to an unknown account.

The first suspect was described by police as 30-years-old, with a medium complexion, heavy build, last seen wearing a red and white jacekt with a NASA logo on the left breast, a black fanny bag across his chest and light colored blue jeans. 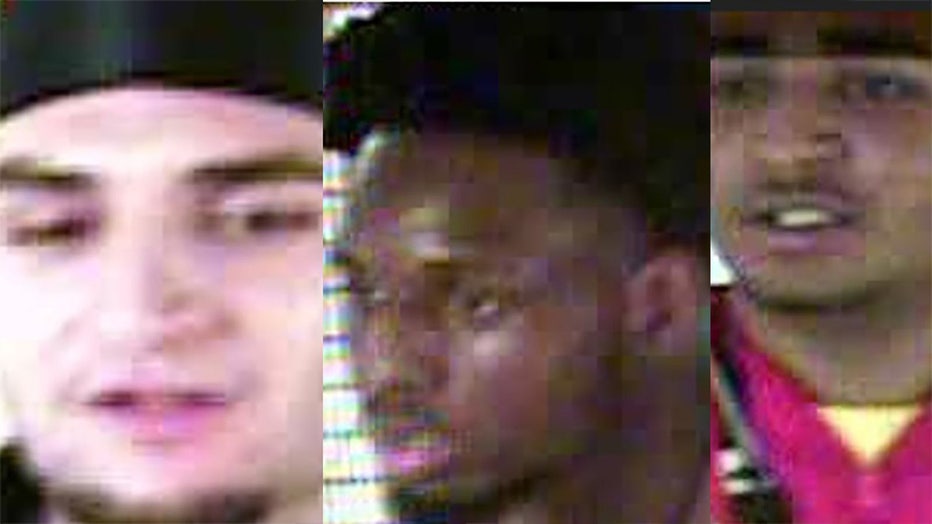 The NYPD was looking for three individuals involved in a string of robberies.

The second suspect was described as a male approximately 20-years-old, with a light complexion, slim build, last seen wearing a black du-rag and black hooded sweatshirt.

The third suspect was described as a male approximately 30-years-old, with a dark complexion, medium build, with black hair in dreadlocks.

Anyone with information regarding this pattern is asked to call the NYPD's Crime Stoppers Hotline at 1-800-577-TIPS (8477). The public can also submit their tips by logging onto the CrimeStoppers website at https://crimestoppers.nypdonline.org/ or on Twitter @NYPDTips.