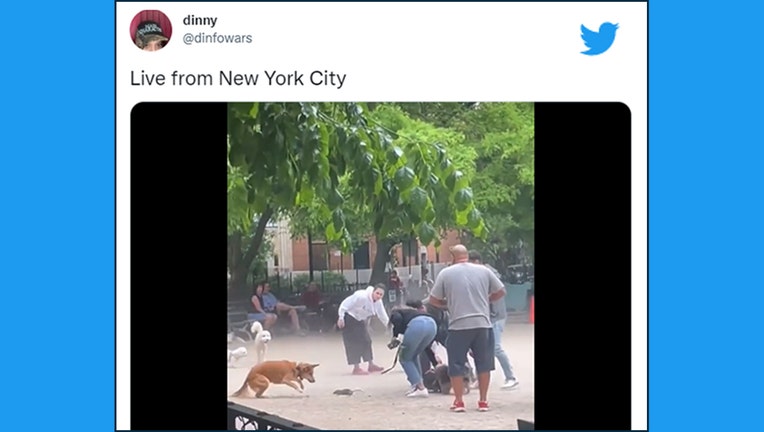 NEW YORK - In news surprising no one who knows the rat-infested history of the Lower East Side's Tompkins Square Park, a rat invaded the dog run there and sent the pooches — and their people — into a frenzy, as seen in a video that has gone viral.

The video, posted on Tuesday, May 24, has racked up more than 6.2 million views on Twitter. It shows several dogs surrounding the rat and taking turns pouncing, nudging, and chomping on it. In the video, one dog — later identified by her owner as Zoey, according to the New York Post — briefly grabs the rat in her mouth and then flings it away.

The dogs' owners add to the mayhem by shuffling among all the beasts — canine and rodent — pointing fingers and issuing commands that were mostly ignored at first. Finally, the dogs appear to open a path for the rat to hobble off — although the video clip ends before we can see if the rat escaped.

The comments on Twitter did not disappoint, of course.

"Nothing to see here just a family picnic," @iconic_bihh wrote.

"You know it’s a New York rat because it fought back," @JillNewyen tweeted. "Ready to risk it all."

"she came from a small town and she's NOT going back!" @wayfaring_tim said of the rat and her dreams.