Waterspout at the Jersey Shore

A waterspout formed over Barnegat Bay in New Jersey over the weekend. The Seaside Park Volunteer Fire Company shared this video of the weather phenomenon.

SEASIDE HEIGHTS, N.J. - A large waterspout formed in Barnegat Bay near Seaside Heights, New Jersey, at about 2:30 p.m. Saturday, according to the National Weather Service, or NWS.

Powerful winds and pouring rain soaked the tristate area over the weekend. In fact, forecasters issued a special marine warning for coastal waters from the Manasquan Inlet to Little Egg inlet and advised boats to seek harbor immediately.

Several people spotted the towering waterspout, which is a kind of tornado over water, and reported it to authorities.

Bobby Ring of the Seaside Park Volunteer Fire Company posted a video of the spinning mist and air in between Toms River and Seaside Heights, north of the Route 37 bridge. Ring shared images and videos of the waterspout with FOX 5 NY.

Meteorologist Brian Haines of the NWS office in Mount Holly told NJ.com that waterspouts aren't an everyday occurrence but do form along the New Jersey shore when conditions are right. 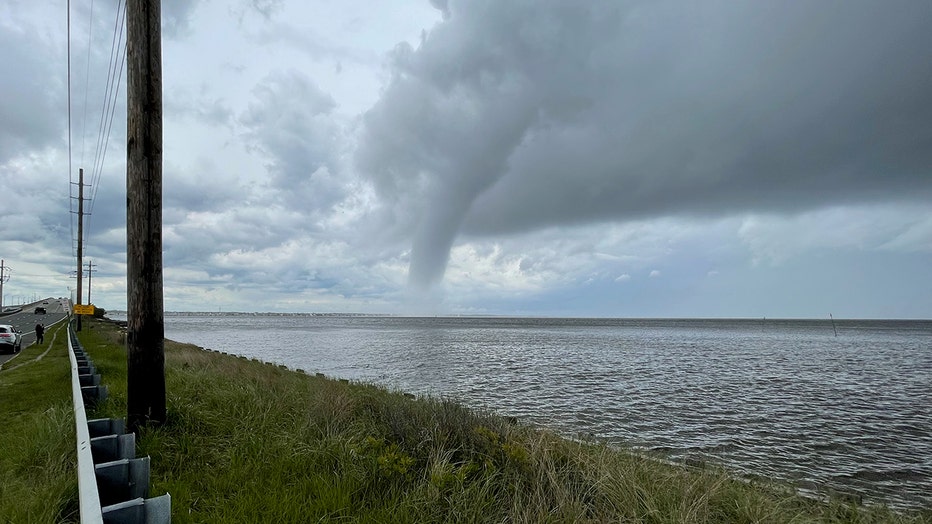 A waterspout was spotted over Barnegat Bay, N.J., on Saturday, May 8, 2021. (Photo courtesy of Seaside Park Volunteer Fire Company)

Waterspouts come in two types: tornadic waterspouts and fair-weather waterspouts, according to NWS. Both types can pose danger to vessels and land.

Tornadic waterspouts, which form in severe thunderstorms, have the same characteristics as a land tornado but either happen to form over water or move from land to water.

"They are associated with severe thunderstorms, and are often accompanied by high winds and seas, large hail, and frequent dangerous lightning," the NWS website states.

Fair-weather waterspouts generally aren't associated with thunderstorms, according to NWS. Although they don't tend to move much because they usually form during form in light wind conditions, they can be dangerous, too.

"If a waterspout moves onshore, the National Weather Service issues a tornado warning as some of them can cause significant damages and injuries to people," NWS states. "Typically, fair-weather waterspouts dissipate rapidly when they make landfall, and rarely penetrate far inland." 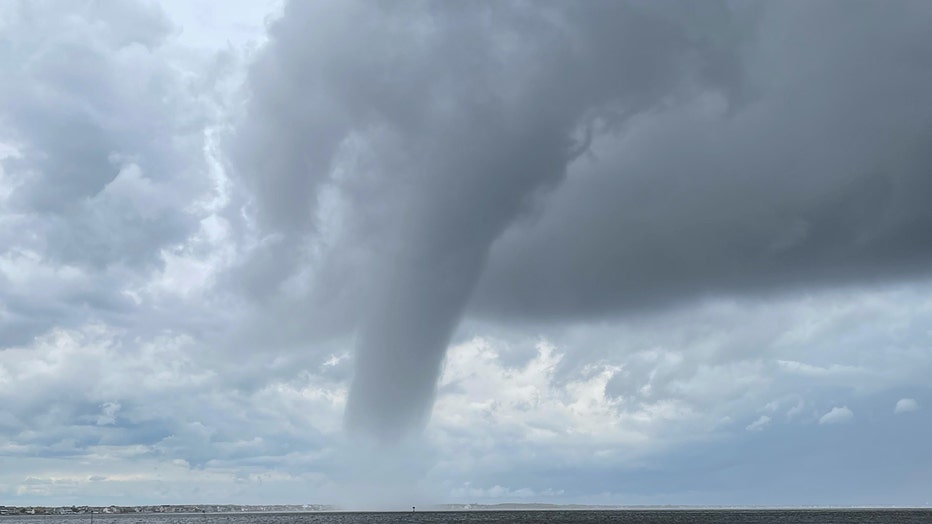 A waterspout was spotted over Barnegat Bay, N.J., on Saturday, May 8, 2021. (Photo courtesy of Seaside Park Volunteer Fire Company)