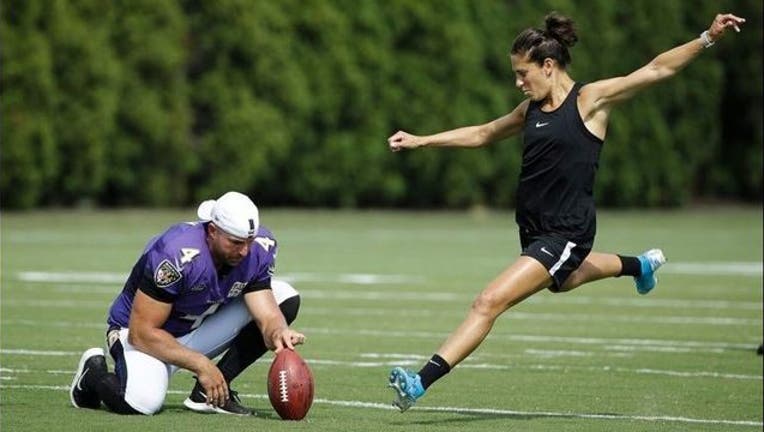 The World Cup champion was offered a chance to kick for an NFL team during the final week of the preseason, Lloyd's trainer James Galanis told Fox Sports on Monday.

Lloyd told Sports Illustrated on Friday she has "definitely gotten some inquiries" from NFL teams after a video of her nailing a 55-yard field goal at a joint practice session between the Philadelphia Eagles and Baltimore Ravens went viral.

She added the videos ignited some "interesting chatter" about women potentially playing in the NFL.

On Monday, Galanis told Fox Sports that the U.S. soccer great was given the opportunity to be a part of an NFL roster and see game time. Galanis didn't name which NFL team, but Lloyd's interest conflicted with the U.S. match against Portugal on Thursday.

All 32 NFL teams play Thursday in the final tune-up before the regular season.

"I think Carli is perfectly made out for a job like that. She loves the pressure," Galanis told Fox Sports. "She's got one of the hardest kicks in the world when it comes to women. She is great at long range balls, she displayed that by scoring a goal from just past the halfway line in a World Cup final, and she is definitely in tune with the mechanics. She would be an ideal candidate."

Lloyd told NBC Sports that joining the NFL would be "pretty massive" for young women to see.

"Oh, that would be massive. Pretty massive," she said. "If I was a little girl watching and I saw an NFL kicker that was a female, that would be cool."