Tips and tricks to maximize your fuel economy and save a few bucks.

WASHINGTON - The soaring gas prices nationwide have put a financial strain on drivers at the pump, and there’s a chance you could soon pay even more the next time you fill up your tank.

Patrick De Haan, an analyst for gas-tracking firm Gas Buddy, says gas prices may surge to $5 per gallon this month.

RELATED: Gas prices average over $4 in all 50 states for 1st time ever

Last week, the average U.S. price of regular-grade gasoline spiked 33 cents over the previous two weeks to $4.71 per gallon.

The highest average price for regular-grade gas is in the San Francisco Bay Area, at $6.20 per gallon. The lowest average is in Tulsa, Oklahoma, at $3.92 per gallon. 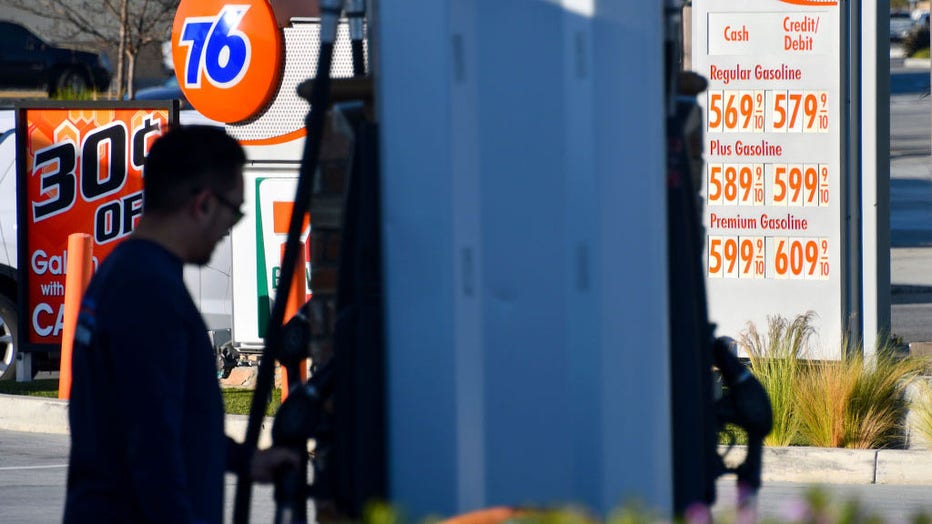 High gas prices at a station on the corner of Valley View Street and Chapman Avenue in Garden Grove, CA, on March 7, 2022. (Jeff Gritchen/MediaNews Group/Orange County Register via Getty Images)

Gas prices rose late last year amid supply chain problems and increased demand as the economy recovered following the COVID-19 pandemic, but prices have climbed ever higher since Russia’s Feb. 24 invasion of Ukraine. The U.S. has banned imports of Russian oil, and other countries are seeking alternatives to Russian energy, driving prices up.

De Haan points to some of these factors contributing to the gas price issue.

"I think there are some of the highest level issues for why gas prices are high, including Russia’s invasion of Ukraine, the loss of several oil refineries in the U.S. Five percent of the refineries have been shut down due to COVID, fires, and Hurricane Ida. And with the diminished refineries, it’s led to lower fuel production. The lower amount of fuel capacity with high demands for gas are contributing to the high gas prices."

Could gas prices drop this year?

While it’s hard to have optimism that gas prices will dip, particularly during the summer when more people tend to travel, De Haan believes prices may drop by the fall.

"Certainly, gas prices could drop because it’s cyclical in nature. The question is how much will prices drop and would the country slip into a recession," De Haan said. "We will see some measure of relief prices could fall in September and October. I would expect the national average to fall to $4 gallon there could be a reversal in the economy, there may be something President Biden and world leaders come up with as a solution to address high gas prices."

How can I save money at the pump?

Fuel efficiency is key to saving a few dollars at the gas station.

De Haan believes by decreasing your driving speed by 5 to 10 miles per hour, you can save $0.50 per gallon. "By slowing down while driving, you can lower fuel consumption and save on gas," he offered.

Gas prices average over $4 in all 50 states

In mid-May, the average price of a gallon of regular unleaded gas rose above $4 a gallon in all 50 states. That marked the first time every single state has passed the $4 mark at once.

Prices in the West Coast state hit a new average record of $6.02 a gallon, and are set to go even higher on July 1 when California’s gas tax increases again.

During Memorial Day weekend, millions of travelers hit the road, with the majority of people driving despite high gas prices.

House passes bill to crack down on gas ‘price gouging’

The House approved legislation on May 19 to crack down on alleged price gouging by oil companies and other energy producers with surging gas prices.

A bill backed by House Democrats would give President Joe Biden authority to declare an energy emergency that would make it unlawful to increase gasoline and home energy fuel prices in an "excessive" or exploitative manner.

The bill directs the Federal Trade Commission to punish companies that engage in price gouging and adds a new unit at the FTC to monitor fuel markets.

President Joe Biden is leaning towards making a visit to Saudi Arabia with gas prices soaring.

The White House is weighing a visit that would also include a meeting of the leaders of the Gulf Cooperation Council countries (Bahrain, Kuwait, Oman, Qatar, Saudi Arabia and United Arab Emirates) as well as Egypt, Iraq and Jordan.

It comes as overriding U.S. strategic interests in oil and security have pushed the administration to rethink the arms-length stance that Biden pledged to take with the Saudis as a candidate for the White House.

Any meeting between Biden and de facto Saudi ruler Prince Mohammed bin Salman during a Biden visit to the Middle East could offer hope of some relief for U.S. gasoline consumers.

White House press secretary Karine Jean-Pierre on Wednesday declined to comment on whether Biden will travel to Saudi Arabia. He is expected to travel to Europe at the end of June and could tack on a stop in Saudi Arabia to meet with Prince Mohammed, Saudi King Salman and other leaders. If he does, Biden would also likely visit Israel.

FOX 5 Atlanta and the Associated Press contributed to this story. This story was reported from Washington, D.C.