What to know about Pfizer and Merck's COVID treatment pills

U.S. health regulators have authorized two pills against COVID-19 that Americans can take at home, developed by Pfizer and Merck.

The U.S. Food and Drug Administration’s approval comes a day after the agency cleared a similar drug from Pfizer, called Paxlovid. That pill is likely to become the first-choice treatment against the virus, thanks to its superior benefits and milder side effects.

As a result, Merck's pill is expected to have a smaller role against the pandemic than predicted just a few weeks ago. Its ability to head off severe COVID-19 is much smaller than initially announced and the drug label will warn of serious safety issues, including the potential for birth defects.

Merck’s drug was authorized for adults with early symptoms of COVID-19 who face the highest risks of hospitalization, including older people and those with conditions like obesity and heart disease. The Merck drug will carry a warning against use during pregnancy.

The U.K. first authorized the pill in early November. 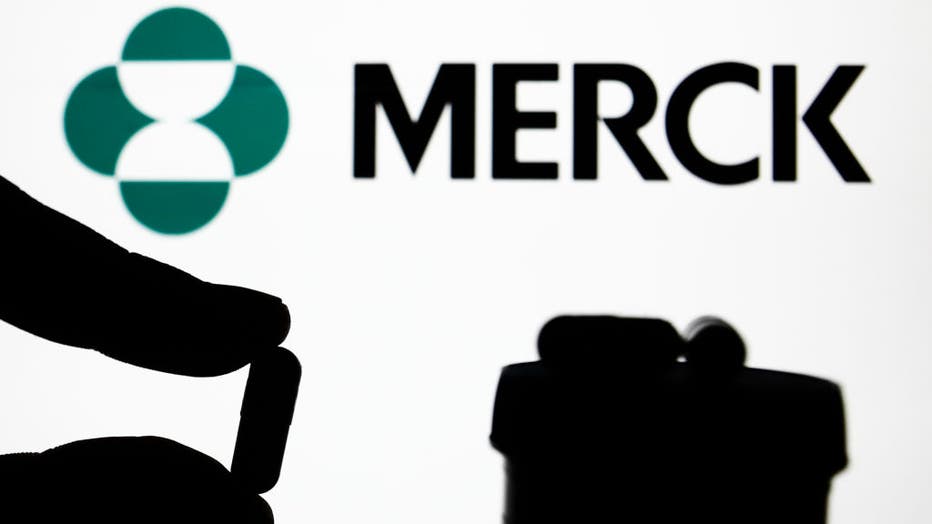 File - Medicine pill is seen with Merck logo displayed on a screen in the background in this illustration photo taken in Poland on Nov. 5, 2021. (Photo by Jakub Porzycki/NurPhoto via Getty Images)

Since the beginning of the pandemic, health experts have stressed the need for a convenient pill. The goal is for something similar to Tamiflu, the 20-year-old flu medication that shortens the illness by a day or two and blunts the severity of symptoms like fever, cough and stuffy nose.

The drugmaker asked U.S. regulators on Oct. 11 to authorize its pill for treating the virus. Last month, an FDA advisory panel only narrowly endorsed the drug, warning that its use would have to be strictly tailored to patients who can benefit the most.

Some experts question whether there will be much of a role for the Merck drug in the U.S.

"To the extent that there’s an ample supply of Pfizer's pill, I think it won’t be used," said Dr. Gregory Poland of the Mayo Clinic, referring to the Merck drug. "There would be no reason, given it has less efficacy and a higher risk of side effects."

For now, the FDA decision provides another potential option against the virus that has killed more than 800,000 Americans, even as health officials brace for record-setting cases, hospitalizations and deaths driven by the omicron variant. Antiviral pills, including Merck’s, are expected to be effective against omifcron because they don’t target the spike protein where most of the variant’s worrisome mutations reside.

The FDA based its decision on results showing nearly 7% of patients taking the drug ended up in the hospital and one died at the end of 30 days. That compared with 10% of patients hospitalized who were taking the placebo and nine deaths.

Federal officials have agreed to purchase enough of the drug to treat 3.1 million people.

The U.S. will pay about $700 for each course of Merck’s drug, which requires patients to take four pills twice a day for five days. A review by Harvard University and King’s College London estimated it costs about $18 to make each 40-pill course of treatment.

Merck’s drug inserts tiny errors into the coronavirus’ genetic code to slow its reproduction. That genetic effect has raised concerns that the drug could cause mutations in human fetuses and even spur more virulent strains of the virus. But FDA scientists said the variant risk is largely theoretical because people take the drug for such a short period of time.

In addition, Merck has agreed to allow other drugmakers to produce its COVID-19 pill, in a move aimed at helping millions of people in poorer countries get access to the potentially life-saving drug.

Medicines Patent Pool said in a statement that it had signed a voluntary licensing agreement for molnupiravir with Merck and its partner Ridgeback Biotherapeutics.

The agreement will allow the Medicines Patent Pool to grant further licenses to qualified companies who are approved to make the drug. Neither drugmaker will receive royalties under the agreement for as long as the World Health Organization deems COVID-19 to be a global emergency.

Charles Gore, the executive director of the Medicines Patent Pool, said he hoped this first voluntary licensing agreement for a COVID-19 treatment would lead to others.

Meanwhile, top U.S. health officials continue to push vaccinations and booster shots as the best way to protect against COVID-19.