Astronomers have discovered four mysterious objects that appear to be circular and brighter along the edges, according to a recent study.

An international Ph.D. student in the School of Physics at the University of Sydney discovered unusual radio waves emanating from the center of the Milky Way prompting astronomers to seek evidence of what could be sending the signals, according to a news release.

Ziteng Wang reported his findings of the signal in a study published in "The Astrophysical Journal" on Oct. 12. The signal was first identified in January of 2020 and detected another six times after that, according to the study.

"The strangest property of this new signal is that it is has a very high polarisation. This means its light oscillates in only one direction, but that direction rotates with time," Wang said in a news release. 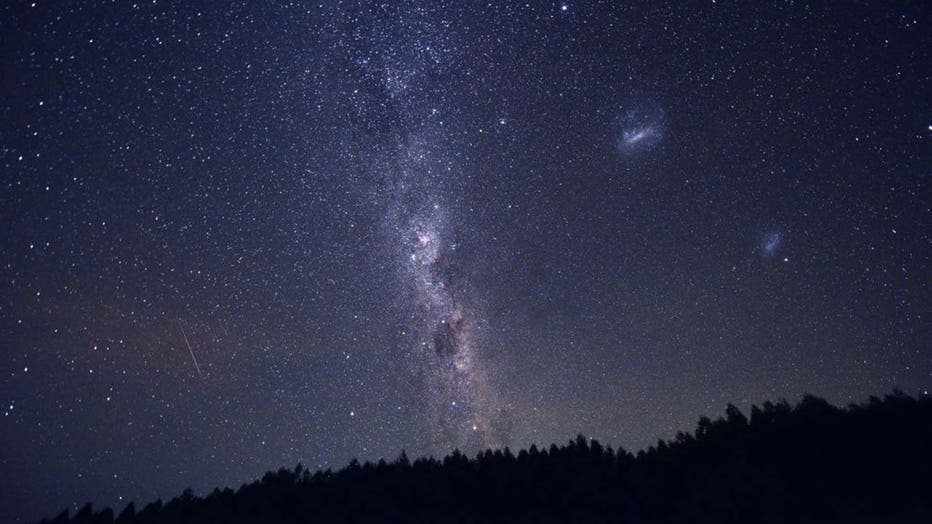 FILE - A view of the Milky Way appears in the night sky.

RELATED: NASA exploring how to prevent asteroid from hitting earth in the future

The radio wave is dubbed ASKAP J173608.2−321635 - after the telescope which first discovered it and the coordinates where it originated - and is very "unique," according to Wang.

"This behaviour was extraordinary," Wang continued.

The radio waves would come and go intermittently, which is unusual, according to Professor Tara Murphy, also from the Sydney Institute for Astronomy and the School of Physics, and Wang’s supervisor.

"Luckily, the signal returned, but we found that the behaviour of the source was dramatically different – the source disappeared in a single day, even though it had lasted for weeks in our previous ASKAP observations," Murphy said in a news release.

Astronomers who continually monitored the radio waves said the characteristics and sporadic emergence of the signals are akin to a recently discovered class of mysterious space objects called "Galactic Centre Radio Transients," co-supervisor, Professor David Kaplan, from the University of Wisconsin-Milwaukee, said in the news release.

One of the mysterious objects that have been placed into this category that shares similar characteristics to ASKAP J173608.2-321635 is named the "cosmic burper."

"While our new object, ASKAP J173608.2-321635, does share some properties with GCRTs there are also differences. And we don’t really understand those sources, anyway, so this adds to the mystery," Kaplan added.

Scientists are awaiting the completion of the transcontinental Square Kilometre Array (SKA) radio telescope which will allow the ability to create sensitive maps of the sky and could potentially make out what exactly is sending out these mysterious radio waves from the center of our galaxy.

"We expect the power of this telescope will help us solve mysteries such as this latest discovery, but it will also open vast new swathes of the cosmos to exploration in the radio spectrum," Murphy said.