"We want no more airstrikes. No more missile strikes," Zelenska told Republican and Democratic congressional members in a speech capping a visit to Washington in the stead of her husband, President Volodymyr Zelenskyy. "Is this too much to ask for?"

"This is what I'm asking for and what my husband is asking for," she said from the stage of the Capitol's congressional auditorium, showing photos of carnage on an overhead screen that had lawmakers shaking their heads at the scenes. "As parents."

Zelenska's Washington meetings with first lady Jill Biden, President Joe Biden and other top administration figures have been among her highest-profile events of the war. She spent the first two months after Russian President Vladimir Putin invaded Ukraine in late February in seclusion with her two children, for safety.

Her husband has remained in Ukraine's capital, Kyiv, through the war. He made a powerful address by video to lawmakers in the same auditorium earlier this year, drawing repeated standing ovations.

Zelenska repeatedly thanked lawmakers and Biden for the billions of dollars in arms and other support the U.S. has delivered to Ukraine to help it battle Russian forces and warplanes. She called for more anti-air defense to help repel what have been unending Russian missile and airstrikes that have killed countless civilians and leveled some Ukrainian cities. 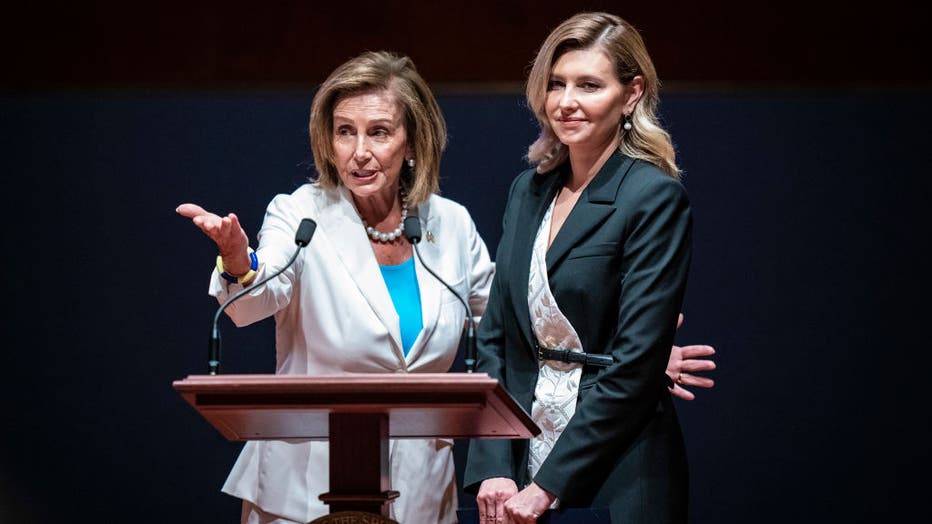 She showed photographs of a smiling, paint-smeared 4-year-old girl, Liza Dmytrieva, whom the first lady had happened to meet before Christmas. The screen next showed an overturned baby carriage with blood caking on the sidewalk beneath it, after an airstrike killed the girl and badly injured her mother last week.

Zelenska showed and told the stories of other Ukrainian children killed or maimed by airstrikes or shot to death as their families tried to flee with them.

"Our family represents the whole world for us, and we do everything to preserve it," Zelenska said. "We cry when we cannot save it. And we remain completely broken when our world is destroyed by war."

The speech was an unexpected change in tone for a visit whose previous public moments had included receiving a bouquet from Joe Biden at the White House, an award ceremony, and a visit to a local monument for Ukrainians.

"We've seen from Ukrainian leadership their courage but also their no-nonsense direct appeal and laying out the brutal mentality of Mr. Putin," Sen. Ben Cardin, a Maryland Democrat, said as lawmakers walked out.