ROCKY HILL, Conn. (AP) - Rear Adm. Jerome Adams, the U.S. Surgeon General, called for caution but "not panic" over the spread of the new coronavirus during a stop Monday in Connecticut, where state officials urged the federal government to increase spending on health agencies and preparedness.

Adams and state Public Health Commissioner Renee Coleman-Mitchell urged the public to take precautions such as washing hands, elbow "bumping" instead of handshaking, and getting flu shots. They said flu shots would decrease the number of people hospitalized because of flu and free up space, if needed, to treat patients sickened by the new virus.

Adams, who was in Connecticut for speaking engagements unrelated to the virus, spoke while touring the state public health laboratory.

"The risk to individuals from the novel coronavirus right now is low. Due to the administration's aggressive containment strategies, we have done a good job of limiting coronavirus entry into the United States," Adams said.

Coleman-Mitchell said the state lab did its first two tests for coronavirus over the weekend and both were negative.

U.S. Sen. Richard Blumenthal, a Connecticut Democrat, said there is bipartisan support for increasing federal government spending to fight and treat the virus.

Blumenthal said he and other members of Congress want to spend much more than the Trump administration's proposed $2.5 billion in extra appropriations to combat the virus. He said there is bipartisan support for at least $8.5 billion in additional spending that he hopes Congress will pass within the next 10 days.

Gov. Ned Lamont, a Democrat, said he planned to urge Vice President Mike Pence during a conference call with other governors Monday that the administration deploy a unified message about the virus and its spread. 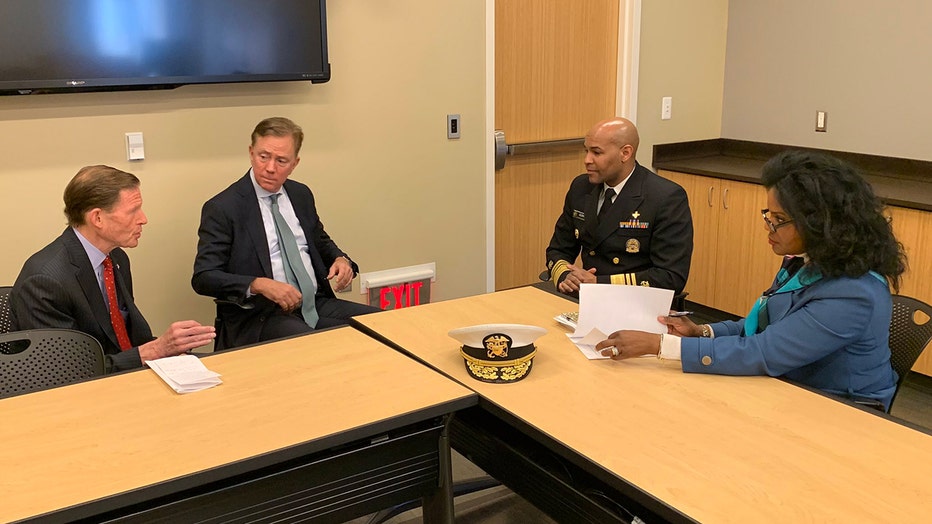