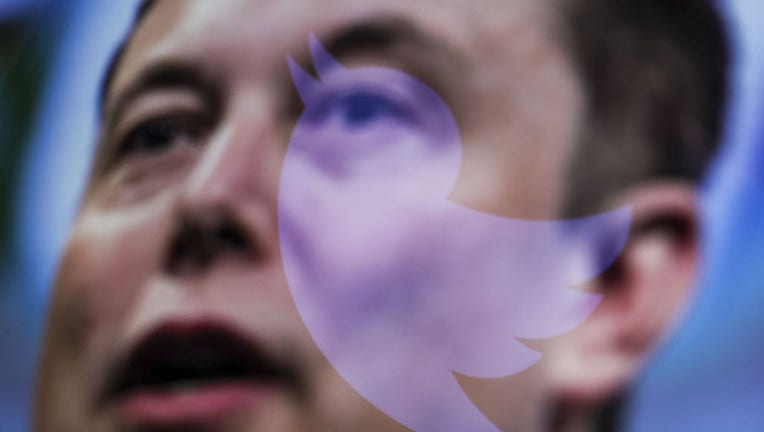 FILE - In this photo illustration, the image of Elon Musk is displayed on a computer screen and the logo of twitter is reflected. Muhammed Selim Korkutata / Anadolu Agency

A Twitter account that tracked the movements of Elon Musk’s private jet was suspended early Wednesday, then briefly reinstated before being suspended once again later in the day.

Jack Sweeney, a University of Central Florida student who operated @ElonJet, confirmed the initial suspension, posting a screenshot that shows that the account had been "permanently suspended" after "careful review."

Then, hours later, Musk brought back the jet-tracking account after imposing new conditions on all of Twitter's users — no more sharing of anyone's current location.

Musk followed up that tweet, saying his son, "lil X," was "followed by crazy stalker (thinking it was me), who later blocked car from moving & climbed onto hood."

"Legal action is being taken against Sweeney & organizations who supported harm to my family," he said.

Tweets from the widely followed @elonjet account were no longer viewable for much of Wednesday. The account had more than 526,000 followers a day earlier.

The account appeared to be briefly reinstated Wednesday evening but was once again suspended for unknown reasons.

Ex-Twitter workers are suing Elon Musk, alleging he broke the law during employee layoffs. Attorney's for the plaintiffs claim Elon Musk laid off women at a much higher rate than men, as well as not accommodating employees needs.

The account’s owner is Jack Sweeney, a 20-year-old college sophomore and programmer who started the flight-tracking account. In an interview with The Associated Press, Sweeney accused Musk of hypocrisy.

"He said this is free speech and he's doing the opposite," Sweeney said.

The suspension came just weeks after Musk wrote that he had not banned the @ElonJet account due to his "commitment to free speech."

Started in 2020 when Sweeney was a teenager, the account automatically posted the Gulfstream jet's flights with a map and an estimate of the amount of jet fuel and carbon emissions it expended.

He logged into Twitter and saw a notice that the account was permanently suspended for breaking Twitter's rules. But the note didn't explain how it broke the rules.

Sweeney said he immediately filed an online form to appeal the suspension. Later, his personal account was also suspended, with a message saying it violated Twitter's rules "against platform manipulation and spam."

And then hours later, the flight-tracking account was back again. Sweeney said his appeal was apparently successful. Musk and Twitter's policy team then sought to publicly explain that Twitter now has new rules.