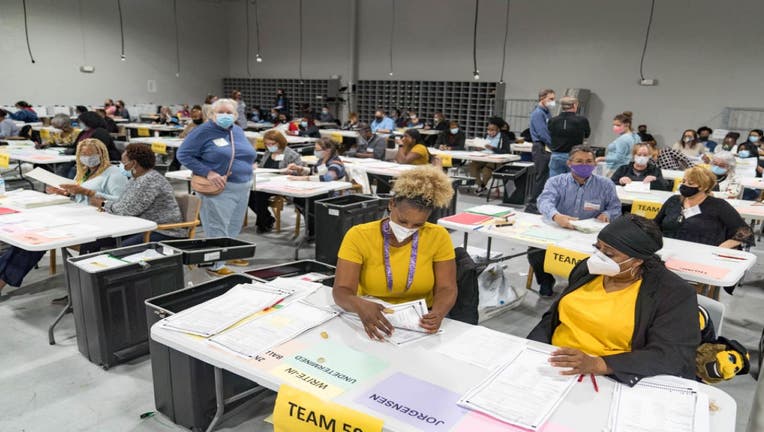 Gwinnett County election workers handle ballots as part of the recount for the 2020 presidential election. (Photo by Megan Varner/Getty Images)

McGhee, 58, has spent more than two decades working with Detroit youth and educating them on the electoral process. He said it was “outrageous” to see hard-fought Black voter-mobilization efforts threatened.

"I thought, these are the ultimate executioners, if you will, put in place so that quietly they could take what belongs to us,” he said.

President-elect Joe Biden was in part powered to victory in Michigan, Wisconsin, Pennsylvania and Georgia by Black voters, many of them concentrated in cities such as Detroit, Philadelphia and Atlanta where he received a significant share of their support. Since Election Day, President Donald Trump and his allies have sought to expose voter fraud that simply does not exist in these and other overwhelmingly Black population centers.

Such a plainly racist strategy to contest the election could erode Black voters’ trust in elections. Voting-rights advocates say they stand ready to beat back any efforts to water down the Black vote. But fears persist that Trump’s allies will undermine democracy and disenfranchise Black Americans and other voters of color.

Trump renewed his attack on Motown voters Thursday, tweeting without evidence, “Voter Fraud in Detroit is rampant, and has been for many years.”

The GOP effort in Michigan came to a head Tuesday, when the Wayne County Board of Canvassers initially deadlocked on a vote to certify election results that included ballots from Detroit, the nation’s largest Black-majority city.

Two Republican canvassers tried to block the routine certification, which provoked an outcry from people attending the meeting and civil rights leaders who questioned whether race was a factor. The two GOP board members eventually reversed their votes and certified the results. They later tried to revert to their original position and were rebuffed by state officials who said the certification could not be rescinded.

“I think it’s a dose of reality of the times that we are living in,” said Nicole Small, vice chair of the Detroit Charter Commission, who believes the vote was a “blatant attempt at voter suppression.”

“I do not believe that Trump has created racism amongst people, but I do think he was the safety net and the vehicle for people to be more active in practicing their racism and their prejudiced beliefs publicly,” Small said.

Michigan Attorney General Dana Nessel blasted the Trump campaign and other groups for filing election-related lawsuits that were frivolous and lacked evidence.

Kristen Clarke, president and executive director of the Lawyers’ Committee for Civil Rights Under Law, said the Republican canvassers’ conduct was part of the ongoing effort "to disenfranchise voters on a scale that is simply unprecedented in modern times.”

Beyond Michigan, the Trump campaign sought a partial recount in Wisconsin — in Milwaukee and Dane counties, which include the majority of the state’s Black population. On Thursday, Trump lawyer Rudy Giuliani renewed unproven claims of voter fraud and impropriety during mail-in vote counting in Pennsylvania, naming Philadelphia and nearby Camden, New Jersey, which is also predominantly Black.

In Philadelphia, state Sen. Sharif Street said Trump’s attacks on the city are neither new nor surprising, given his “abject failure” around COVID-19 and the resulting economic fallout.

During a news conference Thursday in Wilmington, Delaware, Biden said Americans are “witnessing incredible irresponsibility. Incredibly damaging messages are being sent to the rest of the world about how democracy functions.”

Black voters are not the only targets. A Trump-allied group behind challenges in four states, True the Vote, filed a lawsuit alleging officials relaxed voter ID requirements for absentee voters in Menominee County, Wisconsin, which is essentially the Menominee Nation Indian reservation. Most of the group’s lawsuits have been tossed out or withdrawn.

Another lawsuit seeks nullification of votes in Nevada over fraud and irregularities. The Trump campaign and Nevada Republicans alleged the Nevada Native Voter Project illegally enticed Native American voters with gift cards, gas cards, raffle tickets and T-shirts if they voted early or on Election Day. That lawsuit has been dismissed.

And in Arizona, the Trump campaign and the state Republican Party jointly asked courts to halt certification of votes in Maricopa County, which includes Phoenix and a significant portion of the state’s Hispanic population. The lawsuit sought a hand-count of a sampling of ballots from the county. A judge dismissed that lawsuit on Thursday.

The rate of dismissal proves “there’s really no there there to the challenges,” said Anne Houghtaling, deputy director of the Thurgood Marshall Institute, which houses the NAACP Legal Defense Fund's voting rights projects.

“It’s all sort of tilting at windmills,” Houghtaling said.

Black voters and other voters of color were guaranteed free and fair access to the polls through the landmark Voting Rights Act of 1965. Prior to its passage, Black voters, primarily in the South, were routinely subjected to intimidation and deadly violence for simply registering to vote. In places where they could register, some voters faced literacy tests and poll taxes that effectively left them disenfranchised.

In some states, voter discrimination complaints worsened after a 2013 Supreme Court ruling gutted a section of the voting rights law requiring states with a history of discrimination to get federal approval before changing voter regulations. States have passed strict voter ID requirements, carried out voter roll purges and limited early voting in places where minority voters were disproportionately affected.

Election officials from both political parties have stated publicly that the 2020 election went well, and international observers confirmed there were no serious irregularities.

“It’s not the use of the word ‘legal’ vote, it’s the constant insinuation that there are so many illegal or fraudulent votes out there,” said Rick Hasen, a professor of law and political science at the University of California Irvine and author of the Election Law blog. “There’s no evidence produced by the campaign to support there has been a lot of fraud.”