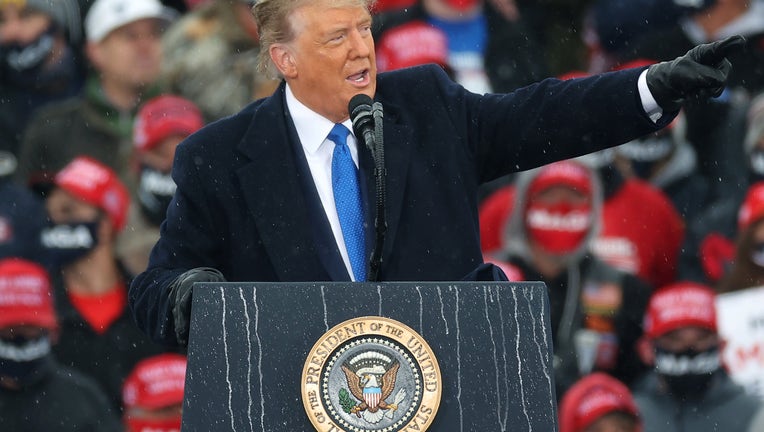 PHILADELPHIA - President Donald Trump's campaign has filed a lawsuit in the United States Supreme Court to halt vote counting in the key battleground state of Pennsylvania over a lack of "transparency."

The campaign announced the news in a press release Wednesday afternoon. A pre-argument conference has been scheduled for Wednesday night in the commonwealth court regarding canvasing observation.

The lawsuit comes a short time after the campaign filed a similar lawsuit in Michigan, another battleground state, saying the campaign has not had proper access to review the opening and processing of absentee ballots.

"This is the most important election of our lifetime, and President Trump made clear our path forward last night: ensure the integrity of this election for the good of the nation. Bad things are happening in Pennsylvania. Democrats are scheming to disenfranchise and dilute Republican votes. President Trump and his team are fighting to put a stop to it," Justin Clark, Trump 2020 Deputy Campaign Manager, said in a statement.

"Pennsylvania’s unhinged, radical left Secretary of State Kathy Boockvar has tried her hardest to bake in a backdoor to victory for Joe Biden with late, illegal ballots in collusion with the partisan state supreme court. The United States Constitution is clear on this issue: the legislature sets the time, place, and manner of elections in America, not state courts or executive officials. As the President has rightly said, the Supreme Court must resolve this crucial contested legal question, so President Trump’s Campaign is moving to intervene in the existing Supreme Court litigation over the Pennsylvania Supreme Court’s unlawful extension of the mail-in ballot receipt deadline," he said.

Rudy Giuliani, the personal attorney to President Trump, said he is "en route" to Philadelphia with the Trump campaign legal team, vowing to protect the vote and "not let" Democrats "steal" Pennsylvania in the 2020 presidential race as the ballot battle intensifies Wednesday.

Giuliani spoke Wednesday afternoon at a press conference with Eric Trump in Philadelphia, where he accused Democrats of trying to cheat in Pennsylvania.

Meanwhile, Trump on Wednesday claimed he is winning “big” in Pennsylvania, and noted that votes are still being counted.

“We are winning Pennsylvania big, but the PA Secretary of State just announced that there are ‘Millions of ballots left to be counted,’” Trump tweeted.

Pennsylvania has 20 electoral votes up for grabs, and is a place where the Trump campaign claims Trump “maintains a lead,” while noting earlier Wednesday that “a healthy number of ballots still to be counted statewide in excess of a million.”

Trump campaign manager Bill Stepien said the campaign has “confidence” in the state, and looking at numbers, even with a “conservative estimate,” it believes the president could win by at least 40,000 votes — even if Philadelphia votes for Democratic nominee Biden in large numbers.

White House Press Secretary Kayleigh McEnany and Eric Trump took to Twitter Wednesday afternoon to declare President Trump had won in Pennsylvania and Twitter quickly added a warning label to their tweets. Fox News and the Associated Press have not yet projected a winner in Pennsylvania and the state has not officially declared a winner.

Pennsylvania Gov. Tom Wolf condemned the Trump campaign over the lawsuit, calling it an effort to disenfranchise voters.

“Pennsylvania is going to count every vote and make sure that everyone has their voice heard. Pennsylvania is going to fight every single attempt to disenfranchise voters and continue to administer a free and fair election. Our election officials at the state and local level should be free to do their jobs without intimidation or attacks. These attempts to subvert the democratic process are disgraceful. In Philadelphia, officials are administering the election with the highest degree of transparency. There has been a livestream of the ballot-counting process available throughout the count, and all parties have canvass observers."

“Pennsylvania will fight every attempt to undermine the election. We will count every vote,” he added.

Meanwhile, the Biden campaign also responded to the lawsuits in battleground states.

When Donald Trump won Wisconsin in 2016 by roughly the same amount of votes that Joe Biden just did, or won Michigan with fewer votes than Joe Biden is winning it now, he bragged about a 'landslide,' and called recount efforts 'sad,'" campaign spokesman Andrew Bates says.

"What makes these charades especially pathetic is that while Trump is demanding recounts in places he has already lost, he's simultaneously engaged in fruitless attempts to halt the counting of votes in other states in which he's on the road to defeat. This is not the behavior of a winning campaign. Plain and simple, Donald Trump has lost Wisconsin, he is losing Michigan, and he is losing the presidency. Put another way, 'It is what it is.'"

Biden to speak in Wilmington, Trump campaign to host press conference in Philadelphia