Three waterspouts were spotted in Mobile Bay, Alabama, on June 20, 2022, as the National Weather Service issued a special marine warning for the coastal area. Credit: Kelly Woods via Storyful

MOBILE, Ala. - It’s like a scene from the movie "Twister" – but only over water.

Beachgoers in Alabama watched as not one, not two but three waterspouts danced on Mobile Bay Monday morning.

More waterspouts were spotted along the coast, prompting the National Weather Service in Mobile to issue a Special Marine Warning for South Mobile Bay, North Mobile Bay and Mississippi Sound.

While there was no threat to land, the fair-weather waterspouts are common this time of year through early fall along the Gulf Coast.

WHAT IS A WATERSPOUT

These types of waterspouts usually form during relatively calm weather and are not associated with thunderstorms. 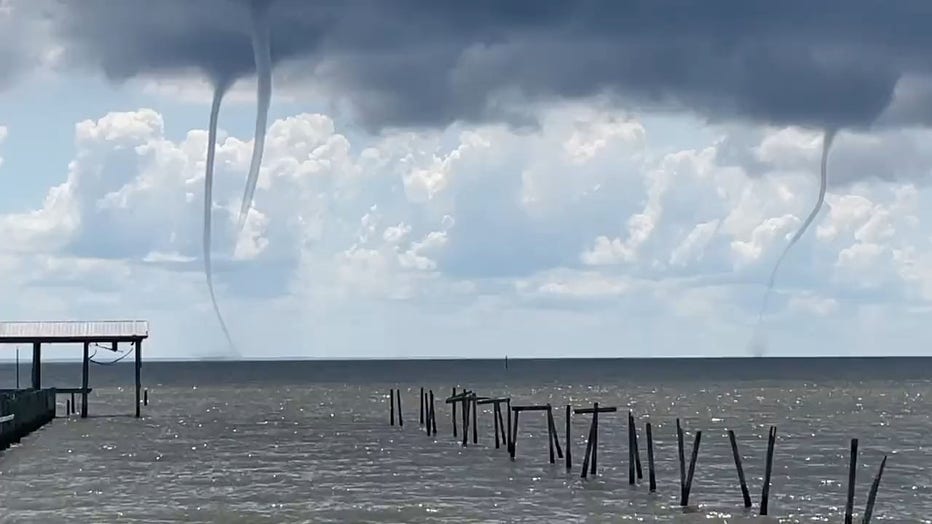 A screengrab from a video shows three waterspouts near Mobile Bay, Alabama, on June 20, 2022. (Credit: Kelly Woods via Storyful)

The NWS says that the fair-weather waterspouts generally happen during the early to mid-morning and sometimes during the late afternoon and form along dark flat bases of a line of developing cumulus clouds.

"Strong temperature gradients between the water and land help create these localized areas of spin (vorticity) at the surface owing to sharp but usually weak changes in wind direction over the bay and adjacent gulf waters," NWS Mobile meteorologists told FOX Weather.

"In most cases like we saw today, we had a thunderstorm that developed over the area of vorticity that helped to stretch that up into the air. As that occurred the local spin tightened up… Once it sufficiently tightened up/stretched we got a waterspout," they said.

The formation of a fair-weather waterspout. (FOX Weather)

"Sometimes this can lead to some spectacular displays such as the one we had today of three waterspouts at once," NWS Mobile continued.

There were no reports of any damage or injuries with these storms.

"The nice thing about these types of waterspouts is they are typically weak and short-lived, but still can pose a hazard for mariners," NWS Mobile said.