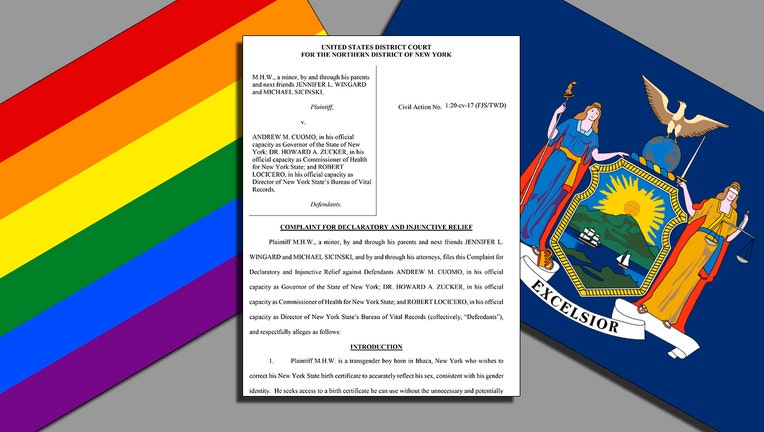 ALBANY, N.Y. - A transgender teen unable to change the sex listed on his birth certificate sued New York state Tuesday, claiming a discriminatory policy is forcing him to rely on a document that inaccurately portrays his identity.

The lawsuit filed in federal court in Albany argues that transgender minors should have the ability to correct their New York state birth certificates, something that underage individuals with documents issued in New York City and some other states can already do. In 2014, New York state broadened who can change the sex listed on their birth certificates to include those who haven't had gender reassignment surgery.

The 14-year-old high school student was born in Ithaca and listed as a female at birth, according to the lawsuit bought by Lambda Legal. The boy, identified in the lawsuit only by the initials M.H.W., said he was frustrated by his incorrect birth certificate. (Read complaint below.)

"This is really just wanting for our son the same recognition that any other kid has, that most kids just take for granted, that most parents take for granted," co-plaintiff Michael Sicinski, the boy's father, told The Associated Press in a phone interview.

M.H.W., who now lives in Houston, Texas, began undergoing hormone replacement therapy in September, according to the lawsuit. A court in Texas approved his name change in October and his mother, Jennifer Wingard, said his U.S. passport and Social Security card now list him as male.

Wingard said she's concerned that her son could face anxiety-provoking problems next year when he applies for a learner's permit because of mismatched identity documents. The boy has already been humiliated by having to explain to agents of the Transportation Security Agency why the name on his plane ticket did not match his gender on official records, according to his parents.

The lawsuit said New York's rule could compel transgender minors outside of New York City to reveal "private and sensitive information" about themselves when they enroll in school or seek a job.

The suit, which names Democratic Gov. Andrew Cuomo and his administration's health commissioner, seeks a change in state policy and a corrected birth certificate for M.H.W.

Messages seeking comment were left Tuesday with the Cuomo administration.

There were an estimated 9,750 transgender teens ages 13 through 17 in New York state, according to a 2017 report from the Williams Institute, a think tank at the UCLA School of Law specializing in LGBT issues. The institute did not break out an estimate for New York City.