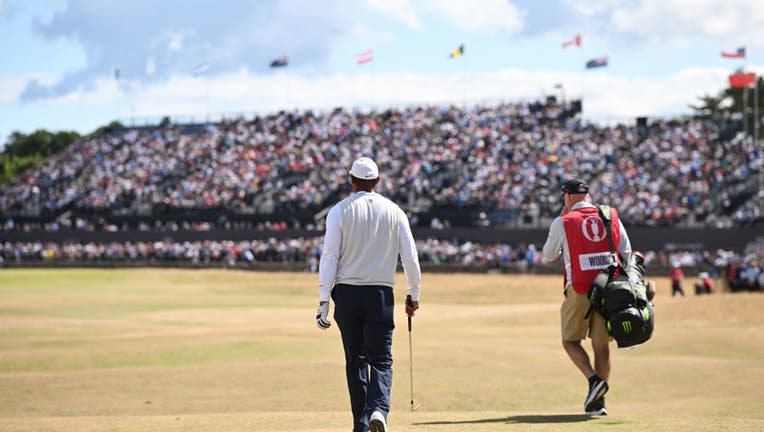 Tiger Woods of the United States walks on the 17th hole during Day Two of The 150th Open at St Andrews Old Course on July 15, 2022 in St Andrews, Scotland.

ST. ANDREWS, Scotland (AP) - Tiger Woods made an early and emotional departure Friday from the British Open, possibly for the last time at St. Andrews. Cameron Smith can only wonder if the 150th Open will be his arrival as an undisputed elite player.

Smith already won The Players Championship this year and has risen to as high as No. 3 in the world. His 8-under 64 gave him his first lead in a major, by two shots over PGA Tour rookie Cameron Young. Rory McIlroy was lurking another shot behind.

"It’s obviously a really good spot to be in," Smith said. "I feel like I’ve been in this spot a lot over the past couple of years, and things just haven’t quite gone my way yet."

Woods strode over the Swilcan Bridge without stopping to pose for pictures and said it "felt like the whole tournament was right there" when he walked the final 356 yards of what was otherwise a long day of 75 to miss the cut.

Woods didn't retire from major championship golf or the British Open. He's just not sure a right leg held together by hardware or a lower spine that has been fused will allow him to compete when the Open returns to St. Andrews again. 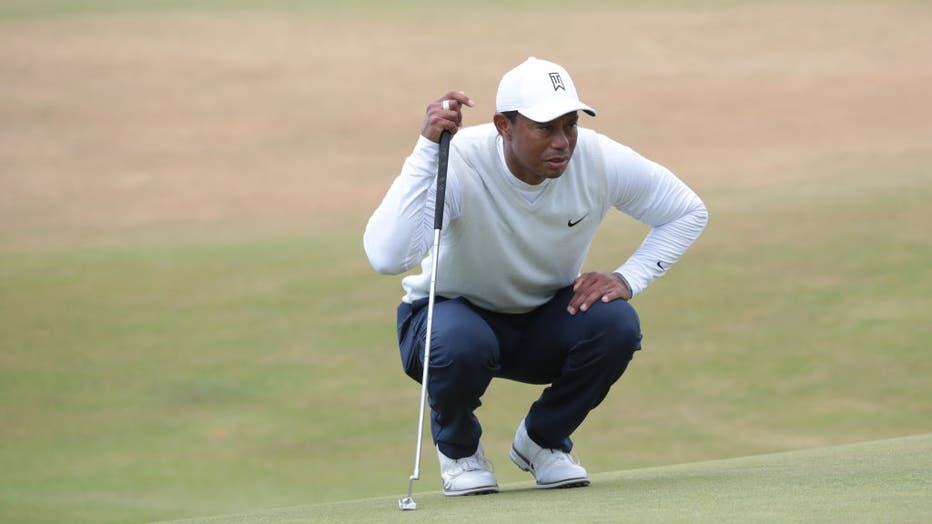 "It’s very emotional for me," he said. "To me it felt like this might have been my last British Open here at St. Andrews. And the fans, the ovation and the warmth, it was an unbelievable feeling."

About the time Woods was saluting thousands of fans crammed into so many spaces around St. Andrews, Smith was making birdie after birdie to take the lead. Right when it looked like it couldn't get any better, he holed a 65-foot eagle putt on the 14th hole.

Young overcame a few mistakes and closed with a birdie for a 69, putting him in the last group with Smith going into the weekend. 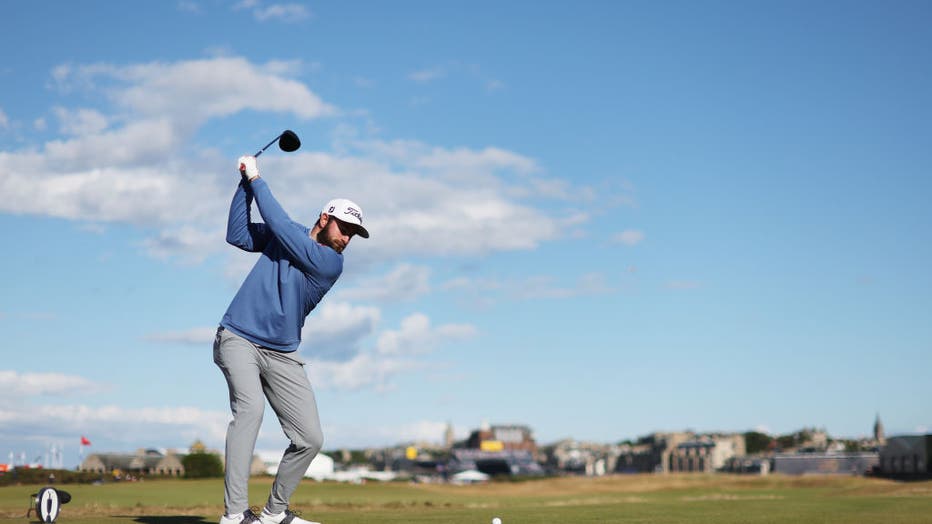 Cameron Young of the United States tees off on the seventeenth hole during Day Two of The 150th Open at St Andrews Old Course on July 15, 2022 in St Andrews, Scotland.

McIlroy got one of the loudest cheers — for a shot, not a farewell — with his 25-foot birdie on the tough Road Hole at the 17th. He missed a birdie chance on the 18th. Still, it was important for him to back up a great start (66) with a solid round (69).

He was tied with Viktor Hovland, who delivered his own thrills by holing out from 139 yards for eagle on the par-4 15th hole and finishing with a birdie for a 66.

Even a weekend without Woods is set up for great theater.

Dustin Johnson, who already has a Masters green jacket and a U.S. Open title at Oakmont, played early in the best conditions of the week — light rain that took some of the fire out of the Old Course and then a warming sun — for a 67. He was four shots back. Right behind was Masters champion Scottie Scheffler with another 68.

Smith is building a reputation as a great putter, a great weapon to have on the greens at St. Andrews, and he plays without fear. He opened with three straight birdies and then began to pull away around the loop at the far end of the course.

He holed an 18-foot putt on No. 7, made birdie from 30 feet on the par-3 eighth and then drove the 10th green and two-putted from some 90 feet for a third birdie in four holes.

The big blow came at the par-5 14th when Smith buried the long eagle putt. He looked as though he'd just rolled in a short one for par. That's his game. That's his style.

"I don't get too excited nor too angry. I like to stay in the middle there," he said. "A lot of people say that it's boring to watch. But that's just how I go about my golf."

On the other end is McIlroy, among the most dynamic players from his generation. With four majors early in his career and always a promise for more, he is seen as one of the better candidates to fill at least some of the void when Woods isn't around. 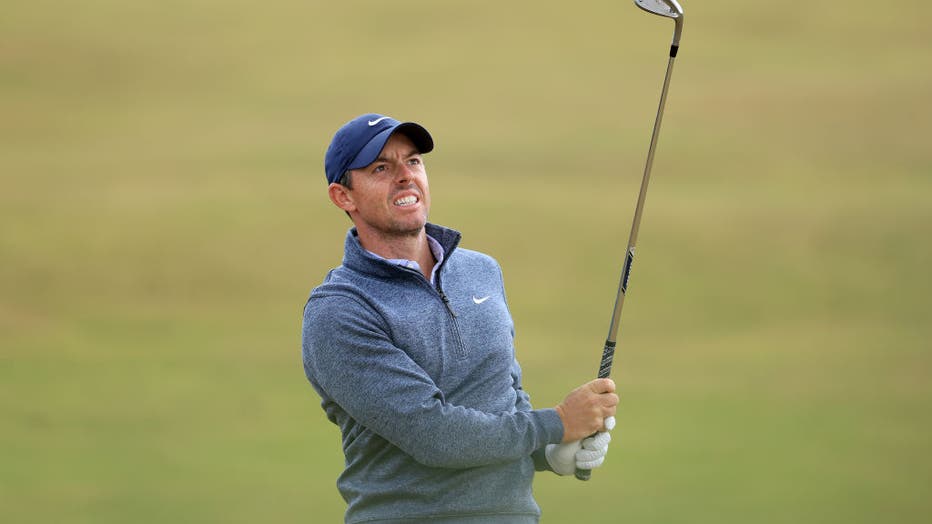 Rory McIlroy of Northern Ireland plays his second shot on the fourth hole during the second round of The 150th Open on The Old Course at St Andrews on July 15, 2022 in St Andrews, Scotland.

That explains the tee times. The R&A was trying to get it close to the right time that Woods and McIlroy would cross paths — Woods going one way toward the 18th, McIlroy the other way heading down the first. That's about how it played out.

McIlroy looked over and tipped his cap to Woods.

"Everyone hopes it’s not the end of his Old Course career," McIlroy said. "I think he deserves — we deserve him — to have another crack at it."

Woods wasn't the only early departure. Collin Morikawa became the first defending champion to miss the cut since Darren Clarke in 2012. Phil Mickelson missed out on the "Celebration of Champions exhibition on Monday, the champions' dinner on Tuesday and the weekend. He missed the cut for the third straight time in the British Open.

For now, McIlroy is trying to add his name to among the greats who have won an Open at St. Andrews. He has finished in the top 10 in the previous three majors this year. He won the Canadian Open last month. He feels he has been playing consistently well.

It would be easy to assume, given his experience in majors, that he's right where he wants to be. But that starts with Smith, who already this year took down the No. 1 player (Jon Rahm) at Kapalua and the strongest field in golf at The Players Championship.

"I just need to go out and play my game and play my golf over the next two days and that’s all I can do," McIlroy said. "Cam Smith goes out and shoots another two rounds like he did the first two days, I’m going to have a really hard time to win the tournament. So I’ve just got to go out and do the best I can and worry about myself and hopefully that’s good enough."