The Thunderbirds and other military planes will fly over New York City on July 4th.

NEW YORK - Military planes will conduct flyovers over New York City and a handful of other cities along the East Coast as part of this year's July Fourth celebration amid the coronavirus pandemic.

The Pentagon says roughly 1,700 service members will support a salute to the “Great Cities of the American Revolution." The Thunderbirds will fly down the Hudson River at approximately 5 p.m. on July 4th before flying past the Statue of Liberty.  The jets will also fly over Boston, Philadelphia, and Baltimore.

From there, the military planes will join with other aircraft participating in the “Salute to America" over Washington, D.C. Washington has held an Independence Day celebration for decades. President Donald Trump added to the mix of events last year with a speech and a display of tanks and warplanes. 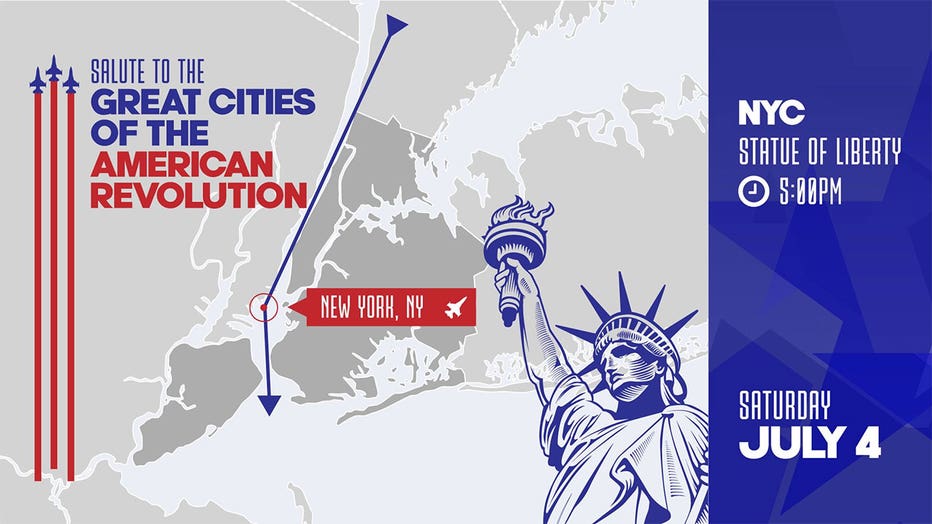 The cost to federal taxpayers jumped to more than $13 million for last year's celebration, up from about $6 million to $7 million in previous years, government auditors recently reported. Some Democratic lawmakers have criticized the additional expense to meet what was described as the president's “extravagant demands."

But the Pentagon said that the flyovers provide a chance for the Department of Defense to demonstrate the professionalism of the Armed Forces and that the crews in this year's celebration would have been using those hours for training at other locations if not participating in the flyovers.

This is the second time the Thunderbirds are flying over New York City this year.  In April, they flew over the city with the U.S. Navy Blue Angels as a show of support to honor front-line workers during the height of the coronavirus pandemic.

Trump plans to kick off Independence Day festivities with a showy display at Mount Rushmore on Friday. The event will include fighter jets thundering over the 79-year-old stone monument in South Dakota’s Black Hills and the first fireworks display at the site since 2009.