Instacart, the popular grocery delivery and pick-up platform, has officially released its Halloween candy data report — and the results may surprise you.

"With the spookiest time of the year finally here, Americans are getting in the spirit by filling their Halloween candy baskets early," Laurentia Romaniuk, Instacart’s trends expert, tells Fox News. "According to Instacart purchase data from last year, customers purchased 2.5 million pounds of candy in the weeks leading up to October 31."

"Whether they’re buying trick-or-treat candy early or enjoying the candy for themselves, candy is a central part of Halloween’s spirit and festivities. For many, it’s often more important than having a costume," she continues, adding that when it comes to the top candy in America, candy lovers are fond of bite-sized chocolate treats with Peanut M&M’s and M&M’s topping the charts as the number one and two top candy products sold on Instacart in terms of weight. 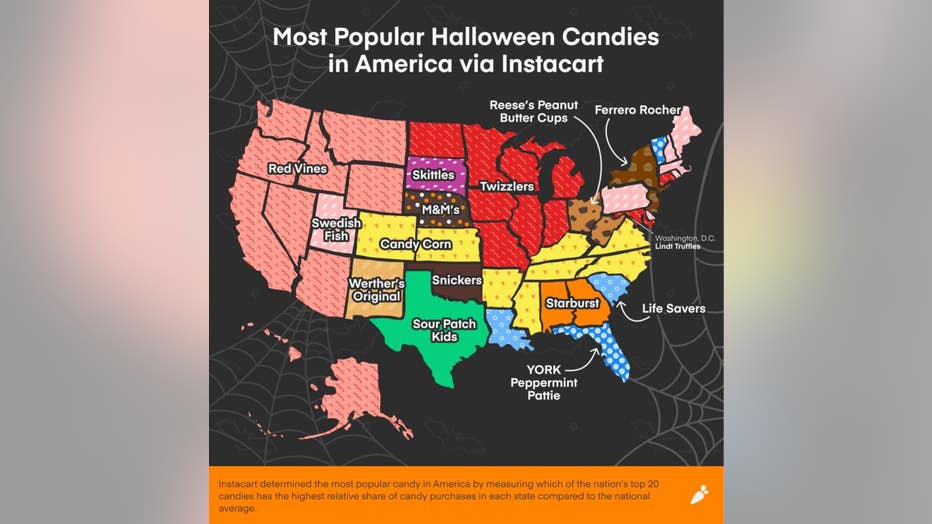 The most popular Halloween candies in America via Instacart. (Credit: Instacart.com)

However, people living in New York and New Jersey's tastes appear to be a little more refined, with Ferrero Rocher Hazelnut Chocolates taking the top spot as each state's most popular Halloween candy.

Next door, in Connecticut, Twizzlers are the #1 Halloween treat.

New York and Connecticut also ranked as two of the states with the smallest sweet tooths in the nation, along with North Carolina, Florida  and Iowa.

To dig into all things Halloween candy this year, Instacart partnered with The Harris Poll to gather survey responses from some 2,000 Americans nationwide, with questions ranging from favorite and least favorite candies to "trick-or-treat confessions" (read: mom stole the candy).

Last-minute candy shopping: According to Instacart data, almost half (43%) of all candy purchases in October take place during the last week of the month with October 31st as the peak day for candy purchases as people prepare for trick-or-treaters.

The South loves candy corn: Instacart data showed that Mississippi, Kentucky, Virginia, North Carolina, and Arkansas are the most likely to purchase candy corn compared to the national average.

Sneaking from the kids: More than half of parents (53%) are absolutely or probably going to eat their kids’ candy this year. 56% of these parents say they won’t feel guilty about it. 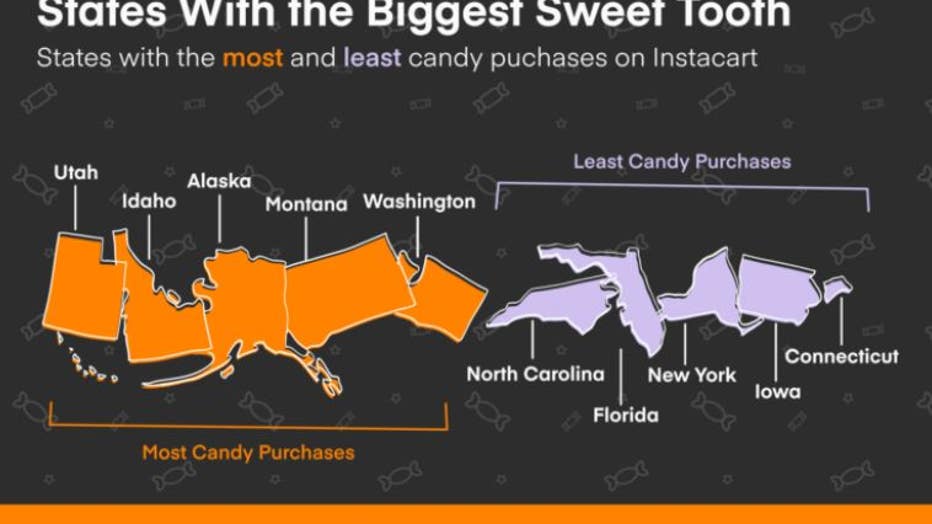 Based on Instacart purchase data, the company also revealed the most popular candies in America. Below, a breakdown of the most uniquely popular Halloween candy by state on the Instacart platform: