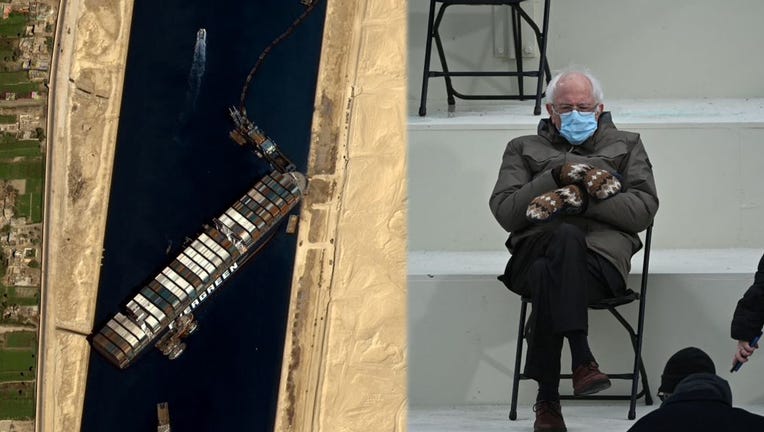 2021 brought some unforgettable memes. The viral content that drives internet culture has exploded ever since people were forced to stay at home, spending more time on their phones and computers as a result of the global pandemic.

As the pandemic spread, many took to social media to connect and relieve their loneliness and stress, which is clear by the key themes that continue to mix humor with topics that dominate news headlines week by week.

Know Your Meme, a popular website dedicated to explaining memes and internet culture, released a 2020 report uncovering themes and trends. COVID-19 was an especially big topic for internet discourse. Within just three months, Know Your Meme accumulated a record-breaking 100 entries, and 6,500 images related to the virus were uploaded to the database.

"Millions of people have connected through memes during the COVID-19 pandemic about everything from hand washing to quarantine, and our research helps companies better understand this important part of digital culture," Don Caldwell, editor-in-chief of Know Your Meme, said in a statement.

Memes may have helped many people get through these tough times with much-needed humor. Here are some of 2021’s most popular memes explained:

Bernie Sanders’ mittens at the inauguration

Sen. Bernie Sanders, bundled up for the cold January air, proved how a simple pair of mittens can unite us all.

The Vermont senator became an instant meme during the 2021 presidential inauguration after he was spotted sitting with his arms crossed, donning a bulky winter coat and handmade mittens. Sanders topped off the look with a blue face mask and his trademark glasses.

Some even went as far as to classify the look as "grumpy chic," and it soon became one of the first memes of 2021.

Harrison Streetman, 5, dresses up as Bernie Sanders from Biden's inauguration.

Prince Harry and Meghan sat down for an explosive interview with Oprah Winfrey that aired in March.

In the two-hour soul-baring interview, the couple painted a deeply unflattering picture of life inside the royal household, depicting a cold, uncaring institution that they had to flee to save their lives.

A skyscraper-sized container ship called the "Ever Given" became stuck sideways in Egypt’s Suez Canal, blocking the vital waterway for nearly a week in March. Its bow had touched the eastern wall of the canal, while its stern looked lodged against the western wall — an extraordinary event that experts said had never occurred in the canal’s 150-year history.

The blockage of the Suez Canal forced some ships at the time to take the long alternate route around the Cape of Good Hope at Africa’s southern tip, requiring additional fuel and other costs. Hundreds of other ships waited in place for the blockage to end.

The shutdown, which raised worries of supply shortages and rising costs for consumers, added strain on the shipping industry already under pressure from the coronavirus pandemic.

After a massive salvage effort by tugboats and help from the tides, the skyscraper-sized vessel was eventually freed six days later, ending the crisis and allowing hundreds of ships to finally pass through the canal. But not before it sparked hundreds of memes online.

Red flag emojis began flooding social media this year. People started posting scenarios in which something stood out to them as a turn-off — or "red flag" — followed by, you guessed it, multiple red flag emojis.

The trend began as something more serious, with people sharing as a way for others to hopefully avoid hurtful relationships or situations, according to Complex. But it has since evolved to include more silly scenarios, like pineapple on pizza, according to one Twitter user.

Kim Kardashian West’s all-black custom Balenciaga outfit she wore at the 2021 Met Gala on Sept. 13 was not only a showstopper — it was essentially a meme factory.

Yes, memes are not just quirky cartoons or images with hilarious captions, they can be clothing too. Kardashian West's outfit, including a faceless mask, started a dialogue of its own following the event's theme, "In America: A Lexicon of Fashion."

One photo taken at the Met Gala event got particularly meme-ified: a picture of her sister, Kendall Jenner, looking perplexed by Kardashian West.

The Weeknd's Super Bowl halftime show had a huge impact on the internet — but perhaps not the kind that the singer-songwriter would have hoped for.

The star's pricey performance featured a sequence in which he appeared to get lost in a labyrinth-like maze of lights and dancers in the stands of Raymond James Stadium in Tampa, Florida.

A look at past Super Bowl halftime shows

While the moment was likely part of the show's shtick and The Weeknd was probably not lost (he did find his way out to perform on the football field after all), it wasn't long until viewers were inspired to churn out jokes about the performance.

"6 year old me looking for my mom after I lost her in the mall," wrote a Twitter user alongside a video of The Weeknd frantically looking around as he speeds through the maze.

"When you lost in the club," said another, sharing the same clip.

Poking fun at the slow COVID-19 vaccine rollout, another added: "Me trying to find a vaccine site with extra shots about to go to waste."

The "For the Better, Right?" meme originated from a scene of "Star Wars Episode II: Attack of the Clones," where Jedi knight Anakin Skywalker and love interest Padme Amidalla exchange political world views.

The meme itself consists of four screenshots from the scene with invented subtitles that depict Anakin saying, "I’m going to change the world," to which Padme replies: "For the better, right?"

For those uninitiated in the "Star Wars" canon, the text refers to Anakin’s fate of becoming Darth Vader, responsible for intergalactic genocide and the success of the evil Empire.

The dialogue in the original meme was never actually said in the film, but the caption has since been remixed countless times aimed at poking fun of everyday conversations that tend to spiral out of control — a relevant topic considering many comment sections online.

One version pokes fun at the plot of another "Star Wars" film "The Empire Strikes Back, in which Darth Vader duels his son, Luke Skywalker.

The happy side, sad side bus meme

The meme that took Instagram and Twitter by storm near the end of 2021 was originally created by Brazilian artist Genildo Ronchi, who uploaded his original cartoon to the platform on Nov. 28, following the meme’s success.

The meme features two people riding a bus on opposite ends. One frowning looking down towards a bleak and lifeless rock formation, while the other admires a gorgeous view of colorful mountain ranges.

"Choose the happy side of life," Ronchi writes in a caption in Portuguese.

The meme has been recycled countless times, replacing the original caption with various nods to relevant cultural moments.

"Goes to therapy, dyed their hair," wrote one Twitter user with their own take on the meme.

In October, Facebook and its apps Instagram and Whatsapp experienced issues that resulted in connection trouble with the inability to load newsfeeds for thousands of users around the world. The outage lasted for hours, prompting memes about the crisis to make the rounds on the internet.

Facebook and its apps Instagram and Whatsapp appeared to be experiencing issues that resulted in connection trouble and the inability to load newsfeeds for thousands of users around the world, according to the company.

Twitter, one of the few social media apps working amid the Facebook outage, took advantage of the chaos by posting a very tongue-in-cheek tweet writing, "hello literally everyone."

The tweet itself became a meme itself garnering 3.3 million likes and more than half a million retweets.

The Associated Press and FOX News contributed to this story.