The vehicles surrounded the bus, which was carrying campaign staff, on Interstate 35. (Credit: John Hinojosa via Storyful)

LOS ANGELES - The Biden campaign canceled at least two events in Texas on October 30 after vehicles carrying Trump flags and signs surrounded one of its campaign buses traveling from San Antonio to Austin, according to Democratic officials.

The Federal Bureau of Investigation is looking into the incident, a law enforcement official confirmed to The Texas Tribune Saturday.

The footage shows vehicles surrounding a bus, which was carrying campaign staff, on Interstate 35 in New Braunfels.

RELATED: 2020 Election: Everything you need to know to vote in Texas

The video was captured by John Hinojosa, who told Storyful he was on the way to pick up his grandchild when he came across the scene. "I thought it was bad traffic for a Friday," he told Storyful, adding that he took out his phone to record when he realized what was happening.

According to The Tribune, the incident featured at least one minor collision and led to Texas Democrats citing "safety concerns" as the reason for canceling the events.

On Friday, Trump tweeted a video of the caravan surrounding the Biden bus with the caption, "I LOVE TEXAS!"

"Rather than engage in productive conversation about the drastically different visions that Joe Biden and Donald Trump have for our country, Trump supporters in Texas [Friday] instead decided to put our staff, surrogates, supporters, and others in harm’s way," said Tariq Thowfeek, Texas communications director for the Biden campaign, the Tribune reported.

The Tribune also reported that Texas GOP Chairman Allen West dismissed questions regarding the incident and characterized it as "more fake news and propaganda." 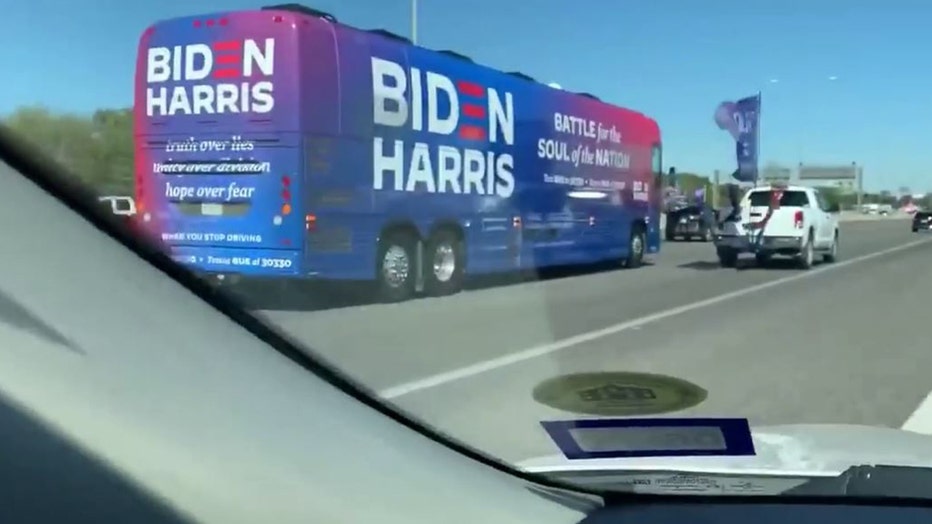 The vehicles surrounded the bus, which was carrying campaign staff, on Interstate 35.

This incident happened just days before the 2020 presidential election and amid record voting in Texas.

In Harris County, Texas, a record 128,000 people voted in person the first day of early voting last week. In fact, over nine million people have already cast a vote in the Lone Star State, topping the state's total turnout in 2016.

Texas has increasingly become known as a battleground state with 38 electoral votes at play. The state has long been considered undeniably red and almost exclusively voted Republican in decades of past presidential elections.But that could potentially change this year, experts say.

"I think Texans are very aware that they’re in the spotlight," James Henson, a political science professor at the University of Texas said. "It’s not entirely new, but it’s increased in the last couple of elections as Texas becomes more competitive."

RELATED: 2020 Election: Texas hasn’t voted Democrat since 1976, but the state is in play this year, experts say

In fact, the transformation is so apparent that the 2020 election could be the first time Democrats capture Texas in a presidential election since 1976.

If Democrats are able to eke out a win in Texas, they could pick up 38 electoral votes, which is second only to California’s 55, a substantial number of votes needed to win the presidency.