Many people today may not know about the role one infamous Jewish mobster played in fighting fascism in the five boroughs.

NEW YORK - It was just before World War II in the late 1930s and gangsters in New York City were as well-known as ball players and politicians. But many people today, may not know about the role one infamous Jewish mobster played in fighting fascism in the five boroughs.

To get a sense of how different things were at this point in the history of New York City, you don't have to look any further than what happened inside Madison Square Garden on Feb. 20, 1939.

They called it a "pro-American rally" and it was sponsored by the German American Bund, an organization based in Manhattan, with thousands of members across the country.

On that day, inside the 'most famous arena in the world' --  The Garden --  the swastikas hung next to a portrait of George Washington.

There were scuffles and fights with protestors, but also open support of Hitler from sympathizers in the city, endorsing a rise of fascism in Europe.

"The war for the hearts and minds of America has already begun, but only a limited number of people are aware of it," said author Michael Benson.

His new book is called Gangsters vs. Nazis: How Jewish mobsters battled Nazis in wartime America.  It's the story of another battle unfolding on the streets of New York and cities across the country as the war raged in Europe.

"The German American Bund was trying to build solidarity in the German voters," Benson said. "So they could be a political force. 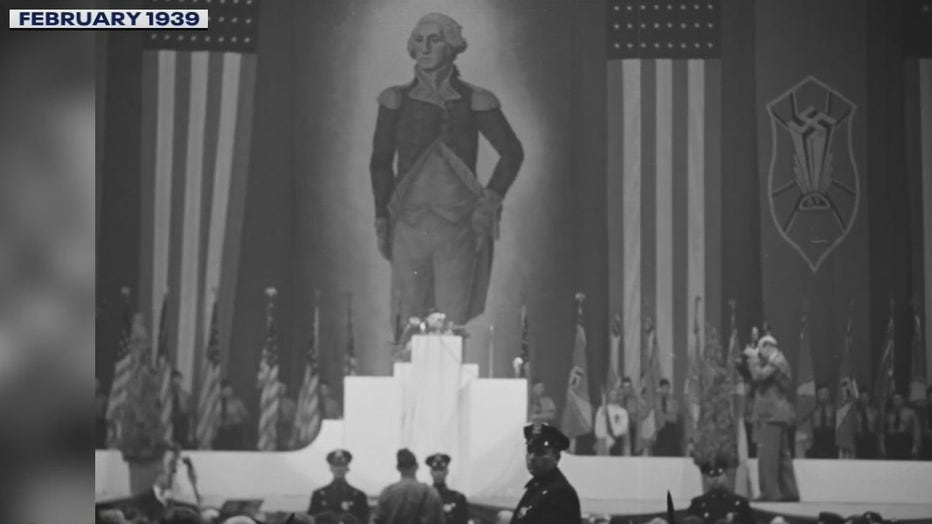 That was their short-term plan. The long term, of course, they wanted to make the United States a larger carbon copy of Nazi Germany."

The judge and Lansky reached a deal - the gangster could rough up the fascists and as long as he promised not to kill anyone, the law would look the other way.

"The next time the Nazis have a rally in Manhattan at the Yorkville Casino on East 86th Street," Benson said.

"They (the gangsters) charge in and they put a hurtin on these guys who are not at all prepared for a fight. It had never occurred to the Nazis, that they could have problems.Seven Nazis end up going to the emergency room. The worst injury is a broken femur because, and Lansky later admitted this, he and another guy dropped one of the Nazis out of a second-story window, which played fast and loose with a no-killing role, but they got lucky," Benson said.

Lanksy recruited gangsters across the country.

In Newark, New Jersey, Longie Zwillman, battled fascism. There was Mickey Cohen who cracked Nazi skulls out west in Los Angeles.  A gangster named David Berman beat back the threat in Minneapolis.

When the judge offered to pay for their services, they refused.

"It's our duty. Later on, they call it their patriotic duty," Benson said.