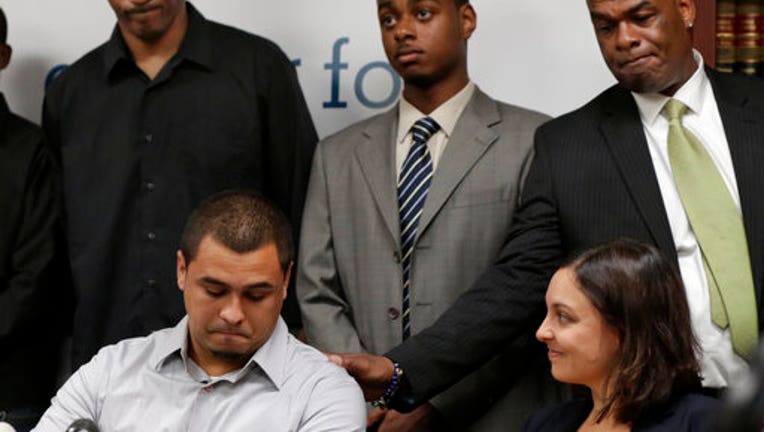 FILE - In this Aug. 12, 2013 file photo, plaintiff in the stop and frisk case David Ourlicht, seated left, is comforted by Merault Almonar, standing at right, father of plaintiff Devin Almonar, standing center, during a news conference at the Center

NEW YORK (AP) — David Ourlicht was a college student, walking down a street near campus, when he became one of millions of New Yorkers swept up in the era of stop and frisk.

A police officer accosted Ourlicht, deeming suspicious a bulge in his jacket. Police patted him down, told him to stand against a wall, emptied his pockets, finding nothing illegal, and accused him of lying about his address, according to court testimony. The 2008 encounter ended with a disorderly conduct summons, which was later dismissed.

Ourlicht was embarrassed, angry and rattled, but not surprised. Police encounters like that had become a cornerstone of policing under then-Mayor Mike Bloomberg and a fact of life for Ourlicht, who is of black and white heritage, and his friends growing up.

He later joined a lawsuit that helped curb stop and frisk and became a lawyer himself. But his experiences with police, which he says began with getting beaten and handcuffed at 15 while trying to go up to his apartment, still cast a shadow over his life today.

“Every day I get into my car, every day I decide to step out of my house, it’s a psyching up that I have to do to myself,” Ourlicht said. “It’s always there.”

New York’s stop-and-frisk history is getting renewed attention as Bloomberg campaigns for the Democratic presidential nomination. Bloomberg long defended the practice, even after a federal judge found that the stops discriminated against those who were black or Latino. He abruptly apologized in November shortly before announcing his White House bid and has largely sought to move past the issue.

That became difficult last week when a 2015 recording of Bloomberg resurfaced in which he said the way to bring down murder rates is to “put a lot of cops” in minority neighborhoods because that’s where “all the crime is.”

Bloomberg said the remarks “do not reflect my commitment to criminal justice reform and racial equity.” He has since gotten endorsements from some members of the Congressional Black Caucus. And as he campaigned in the South last week, many black voters said they weren’t offended by the comments and were more focused on finding a candidate who could beat President Donald Trump.

But the former mayor likely will face more questions about the practice as his campaign gains traction. Bloomberg is on the cusp of qualifying for Wednesday’s presidential debate, where his rivals are sure to pillory him on stop and frisk to blunt his rise and appeal to African Americans, who are a critical voting bloc in the Democratic primary.

Stop and frisk is a term for a tactic police have long used: accosting, questioning and sometimes patting down people who officers think might be doing something illegal, but the suspicions didn't necessarily amount to probable cause for an arrest.

The New York Police Department began increasing its emphasis on stop and frisk in the mid-1990s, when Republican Rudy Giuliani was mayor. But stops soared under Bloomberg – who held office as a Republican and later an independent — rising from about 97,000 stops in 2002 to a high of about 685,000 in 2011. There were fewer than 13,500 stops last year, according to NYPD data.

Over 80% of the people stopped during the surge of stop and frisk were black or Latino.

They include Hawk Newsome, 42, who said he was stopped dozens of times while living in the Bronx when Giuliani, then Bloomberg, served as mayor.

Too often, people overlook the psychological effects of the policy, he added.

“We felt like these cops could murder us. They were pulling out weapons on us and pushing us against the wall. There was this anxiety — we could be killed at any time,” said Newsome, chairman of Black Lives Matter of Greater New York. “Just growing up in it, it made you feel hopeless, like, ‘Damn, this is all my life will ever be. This is how they treat me. Look at our schools, look at our police. My life isn’t worth much.’”

Police and Bloomberg insisted that the stops helped drive crime down to record-low levels and that the tactic was legal.

Critics said stop and frisk amounted to racial discrimination with little impact on crime. About 10% of stops led to arrests or summonses, and only about 1% to weapons seizures.

In 2013, a federal judge declared that New York City’s use of the stops had violated civil and constitutional rights.

Bloomberg’s administration appealed the ruling. His successor dropped the appeal and agreed to reforms and a court-appointed monitor.

It remains to be seen whether voters of color in and outside New York will see past the practice and give serious consideration to Bloomberg. But the national conversation in recent years about racial inequity in the criminal justice system could keep stop and frisk in focus during the rest of the campaign cycle.

“I think there’s more of a recognition that that approach doesn’t work to solve the problem of violence and homicide in communities around the country,” he said, but some people living in neighborhoods plagued by violence “would see the strategy, not necessarily to the extreme of Bloomberg’s approach, as the best option available to them to meet their immediate needs.”

From Love’s perspective, black people who are politically well-connected and “more interested in their own personal success” could gravitate toward someone like Bloomberg.

Many young voters outside New York don't know much about Bloomberg's record as mayor.

But for Brandon Kolawole, 24, of Chicago, mention of stop and frisk triggers a response of familiarity and dread.

"I've seen it, and I've dealt with it," said Kolawole, who is black. "If the police see you, they can just pull you over, stop you and frisk you for whatever reason."

Kolawole, who said he won't vote in November, knows "very little" about Bloomberg and his role in expanding the policy. Kolawole has seen the presidential candidate's ads on television promoting his work with former President Barack Obama but doesn't know much about the former mayor’s time in office.

Warren Evans spent about 30 years in law enforcement in the Detroit area — six of those as a county sheriff and one as the city’s police chief. On Thursday, he endorsed Bloomberg for the Democratic nomination for president.

Evans, who is black and has been Wayne County’s elected executive for the past six years, understands the initial purpose of stop and frisk. But he says it failed because of “bad police practice and the inherent bias many officers have about communities of color.”

“I don’t think it’s going to resonate negatively over the long term” for Bloomberg, Evans told The Associated Press. “I agree with his final determination that when he looked at the data and understood what was going on, it wasn’t good policy and it wasn’t implemented well. But he has done what a lot of politicians don’t do. He didn’t fake an answer.”