In a letter posted Tuesday, 21 members of of the Senate Democratic caucus wrote to the president asking him to "include recurring direct payments and automatic unemployment insurance extensions" tied into economic conditions in his new legislation.

Biden is expected to unveil the first part of his "Build Back Better" package, a sweeping multitrillion-dollar infrastructure plan, on Wednesday in Pittsburgh.

The ambitious plan aims to make generational investments in infrastructure, revive domestic manufacturing, combat climate change and keep the U.S. competitive with China, according to officials. It could include $3 trillion in tax increases. 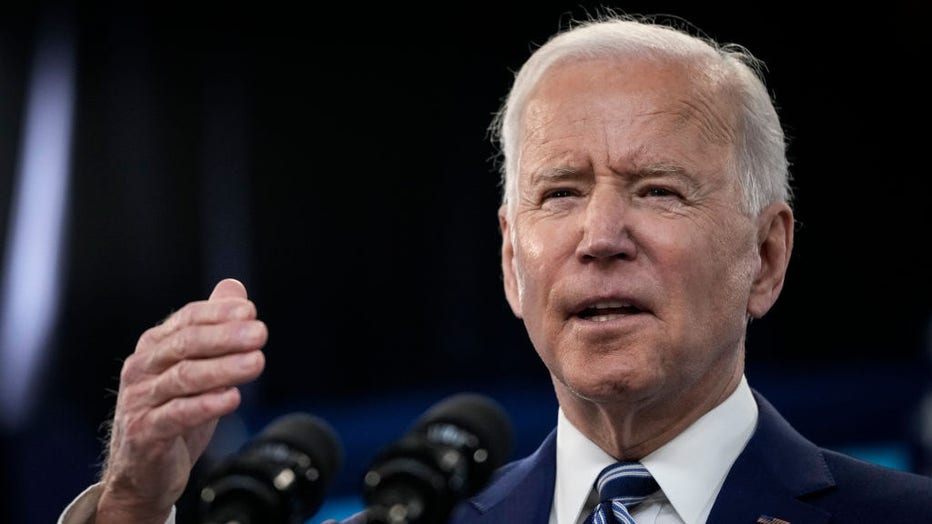 FILE - President Joe Biden delivers remarks on the COVID-19 response and the state of vaccinations in the South Court Auditorium at the White House complex on March 29, 2021 in Washington, DC. (Photo by Drew Angerer/Getty Images)

"This crisis is far from over, and families deserve certainty that they can put food on the table and keep a roof over their heads. Families should not be at the mercy of constantly-shifting legislative timelines and ad hoc solutions," the senators wrote in the letter, led by Finance Committee Chair Ron Wyden of Oregon.

In the $1.9 trillion American Rescue Package, which signed into law on March 11, Democrats included $1,400 stimulus payments and an extension of $300 weekly emergency unemployment benefits until September. In 2020, Congress approved two other rounds of direct payments, sending $1,200 checks to many Americans in March and $600 payments in December.

In the letter, the senators wrote that "a single direct payment will not last long for most families, and we are worried about the cliff facing unemployed workers when the unemployment insurance extensions expire on September 6." They noted the expiration of a jobless benefits boost last summer, which experts say contributed to many falling to poverty-level incomes.

Last week, the number of people seeking unemployment benefits fell sharply to 684,000, the fewest since the pandemic erupted a year ago and a sign that the economy is improving.

Still, a total of 18.9 million people are continuing to collect jobless benefits, up from 18.2 million in the previous week. Roughly one-third of those recipients are in extended federal aid programs, which means they've been unemployed for at least six months.

RELATED: Unemployment claims fall to 684,000, fewest since start of pandemic

The Biden administration wants to see progress on the multitrillion-dollar infrastructure plan by Memorial Day and have it passed over the summer, White House officials said.

The final price tag is in flux but was expected to be between $3 trillion and $4 trillion. One White House official said Monday night that it may end up being closer to $3 trillion.

Though the White House is emphasizing the urgency, it also insists this will not be considered an emergency response like the $1.9 trillion virus relief bill signed into law over Republican objections — though broadly popular with voters of both parties.

"The president has a plan to fix our infrastructure and a plan to pay for it," White House press secretary Jen Psaki said Monday. "But we certainly expect to have the discussion with members of Congress, as we move forward, about areas where they agree, where they disagree, where they would like to see greater emphasis or not."

The physical infrastructure part of the package is not just about updating roads, bridges, rail, public transit and airports. It also is expected to include broadband, electric vehicle charging stations and investments in clean energy and domestic manufacturing, making it far more expansive than what Republicans usually discuss.

Sometime in April, a second package will be unveiled that focuses on universal pre-K, paid family leave and free community college.

The multitrillion-dollar price tag means that any package will eventually need to be paired with tax hikes, drawing Republican opposition to any infrastructure plans that unwind Trump’s 2017 corporate tax rate cuts. Biden has vowed not to raise taxes on households earning less than $400,000 a year.