SEATTLE - Starbucks workers around the U.S. are planning a three-day strike starting Friday as part of their effort to unionize the coffee chain’s stores.

More than 1,000 baristas at 100 stores are planning to walk out, according to Starbucks Workers United, the labor group organizing the effort. The strike will be the longest in the year-old unionization campaign.

The union says it expects the strike will shutter some stores entirely; at others, managers or other workers may keep the stores open.

This is the second major strike in a month by Starbucks’ U.S. workers. On Nov. 17, workers at 110 Starbucks stores held a one-day walkout. That effort coincided with Starbucks’ annual Red Cup Day, when the company gives reusable cups to customers who order a holiday drink. 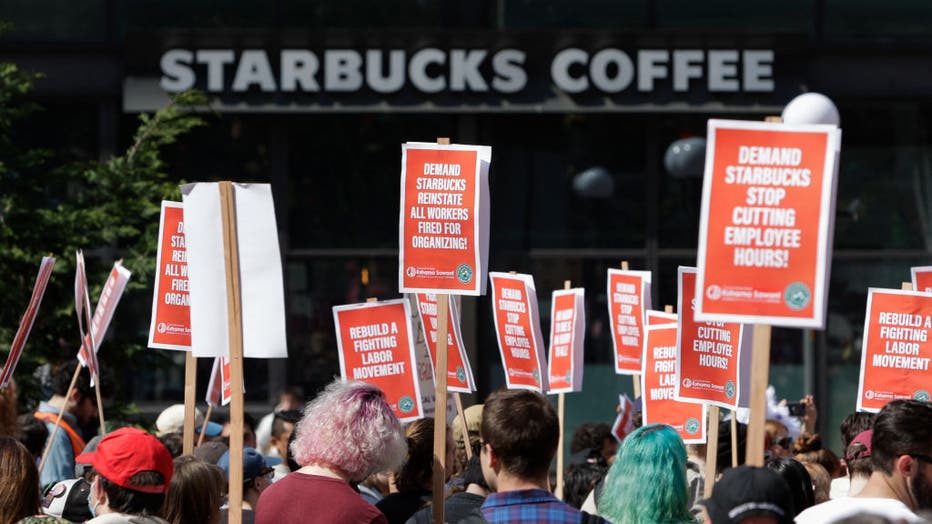 A Starbucks Coffee shop is seen in the background as people gather at Westlake Park during the "Fight Starbucks' Union Busting" rally and march in Seattle, Washington on April 23, 2022. (Photo by Jason Redmond / AFP) (Photo by JASON REDMOND/AFP via G

More than 264 of Starbucks’ 9,000 company-run U.S. stores have voted to unionize since late last year.

Starbucks opposes the unionization effort, saying the company functions better when it works directly with employees.

"We respect our partners’ right to engage in lawful protest activity. Our focus remains on all partners and our commitment to continue to work together, side-by-side, to make Starbucks a company that works for everyone. With our partners in mind, we will continue to show up and be ready to bargain in good faith and have urged Workers United to do the same."

At a Starbucks in Chicago, barista Finn Dorris and shift supervisor Teddy Hoffman were picketing in the snow on Friday, waving to cars that were honking in support. Both said the company has been cutting their hours ahead of the holidays.

"We have had stores close and absorbed partners, which makes it harder to stretch the hours that we are allotted between brand new partners," said Dorris, who prefers to work 20-25 hours per week but lately has been scheduled to work 10.

"The more of us who stand together, the more we send a message to Starbucks, and also each other, and even people who don’t work at Starbucks, that there are folks who aren’t going to tolerate being abused by their employer," Hoffman said.

Tori Tambellini, a former Starbucks shift supervisor and union organizer who was fired in July, said she will be picketing in Pittsburgh this weekend. Tambellini said workers are protesting understaffed stores, poor management and what she calls Starbucks’ "scorched earth method of union busting," including closing stores that have unionized.

Workers United noted that Starbucks recently closed the first store to unionize in Seattle, the company’s hometown. Starbucks has said the store was closed for safety reasons.

Starbucks and the union have begun contract talks in about 50 stores but no agreements have been reached.

The process has been contentious. According to the National Labor Relations Board, Workers United has filed at least 446 unfair labor practice charges against Starbucks since late last year, including that the company fired labor organizers and refused to bargain. The company, meanwhile, has filed 47 charges against the union, among them allegations that it defied bargaining rules when it recorded sessions and posted the recordings online.

So far, the labor disputes haven’t appeared to dent Starbucks’ sales. Starbucks said in November that its revenue rose 3% to a record $8.41 billion in the July-September period.