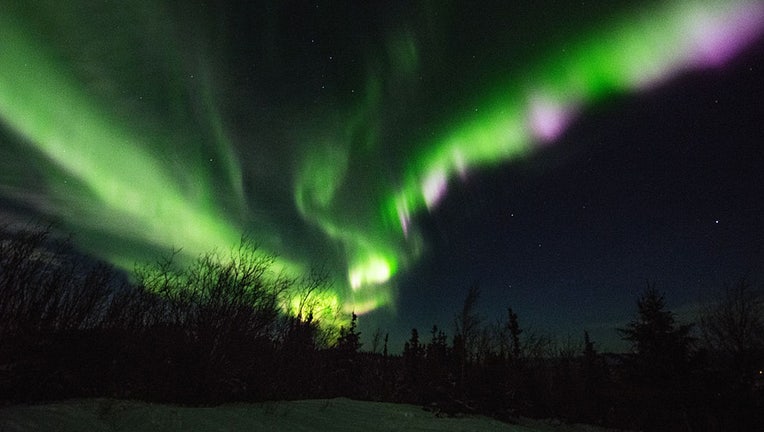 FILE - The aurora borealis appears in the sky on Jan. 8, 2017, near Ester Dome mountain about 10 miles west of Fairbanks, Alaska. (Lance King/Getty Images)

Calling all northerners and Midwesterners! There’s a potential for a particularly spectacular light show in the night sky in the next few days after multiple coronal mass ejections (CME) produced by the sun on August 14 head toward Earth.

A category G3 geomagnetic storm watch was predicted for August 18 which is considered a moderate storm, according to the National Oceanic and Atmospheric Administration.

The storm was originally predicted to be no stronger than a category G2 but since the sun ejected multiple CMEs, at least four of those could have direct contact with Earth, upping the category to a G3, according to NOAA.

Geomagnetic storms in this category have the potential to cause some power system irregularities and intermittent errors in GPS systems but more importantly, they can also produce northern lights.

The NOAA predicts auroras could be seen as far as Oregon to Pennsylvania and even Iowa.

The storm is expected to downgrade to a G2 storm by August 19.

What is a CME?

Every 11 years, the sun completes a solar cycle in which mass amounts of radiation and plasma are emitted in the form of solar storms.

During this cycle, large eruptions of immense energy containing the power of several nuclear bombs explode from the surface of the sun, ripple through space and inevitably strike Earth. These are CMEs. Traveling at over a million miles per hour, the ejected mass of protons and electrons can cross the 93-million-mile distance from the sun to the Earth in a matter of days.

Because the area of space between the Earth and the sun is so vast, there are many CMEs that don’t actually reach our home planet.

But every now and then, this massive explosion of energy does hit our planet, resulting in a geomagnetic storm which usually manifests into auroral lights typically seen near the north and south poles.

Similar to how hurricanes are ranked by categories, The U.S. Space Weather Center (SWPC) ranks solar storms on a scale of "G1 Minor" to "G5 Extreme," with a G5 storm being the most dangerous.

Have we experienced CMEs before?

Earth has been experiencing space storms throughout its history. Scientific data from ice samples taken from the arctic show evidence of massive geomagnetic storms as early as 774 A.D.

In 1859, the Carrington Event, named after British astronomer Richard Carrington, caused mass terror when it obliterated the entire global telegraph system. Auroras were visible as far south as Colombia in what is considered the largest recorded account of a solar storm to hit Earth.

Because the Carrington Event occurred when humans were still early in their technological journey, the damage was minimal. However, experts say if a Carrington-style event were to occur today, with our reliance on technology, the effects could be devastating.

RELATED: How a coronal mass ejection could knock out power grids, internet

On March 10, 1989, astronomers witnessed a huge CME emanating from the sun which released a billion-ton cloud of gas, according to NASA.

"It was like the energy of thousands of nuclear bombs exploding at the same time," NASA said.

That ball of energy started heading toward Earth at a million miles an hour and collided with the planet’s magnetic field on March 12, 1989.

"The violence of this 'geomagnetic storm' caused spectacular 'northern lights' that could be seen as far south as Florida and Cuba," according to NASA.

But the beautiful light show wasn’t the only unusual thing that occurred. Power was knocked out for the entire province of Quebec, Canada, and lasted for 12 hours.