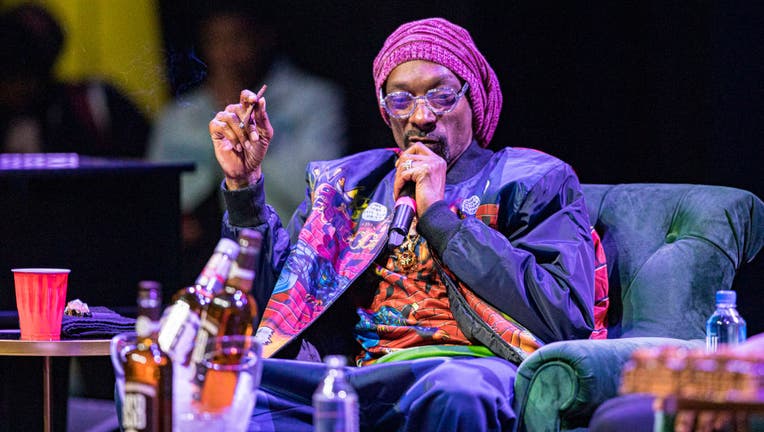 EL CAJON, CALIFORNIA - OCTOBER 22: Snoop Dogg speaks on stage on the final night of Jamie Foxx: Act Like You Got Some Sense Book Tour at The Magnolia on October 22, 2021 in El Cajon, California. (Photo by Daniel Knighton/Getty Images)

Rapper Snoop Dogg confirmed Sunday that his mother died after a hospital stint. A cause of death wasn't revealed.

"Thank u god for giving me an angel for a mother" he posted on Instagram.

According to TMZ, the rapper's mother, Beverly Tate, had been in the hospital for undisclosed reasons.

Over the summer, Snoop Dogg thanked his followers for their prayers for his mother while she was in the hospital.

"Happy Sunday me and my brothers went to c mama today and she opened up her eyes to c us and let us know she still fighting. God is good," he posted in July.

The rapper made it clear that his mother was a big influence on him throughout his life.

The sweet and savory sandwich is served on a sliced glazed doughnut and available for one week only.

In February 2020, he credited his mother for pushing him to apologize to Gayle King for comments he made over her interview with former basketball star Lisa Leslie about the late Kobe Bryant.

"Two wrongs don’t make no right. when you’re wrong, you gotta fix it," he said in an Instagram.

"So with that being said, Gayle King, I publicly tore you down by coming at you in a derogatory manner based off of emotions of me being angry at a question you asked. Overreacted," he said. "I should have handled it way different than that, I was raised way better than that, so I would like to apologize publicly for the language that I used and calling you out your name and just being disrespectful."

Snoop Dogg was furious that the CBS News anchor brought up rape allegations from Bryant’s past in her interview with Leslie, a friend of Bryant. The retired Lakers star was killed in a helicopter crash along with his young daughter and seven others.

Snoop Dogg went on Instagram and called King crude names. He also said she better back off "before we come get you," and posted a slew of insulting photos and memes about her.