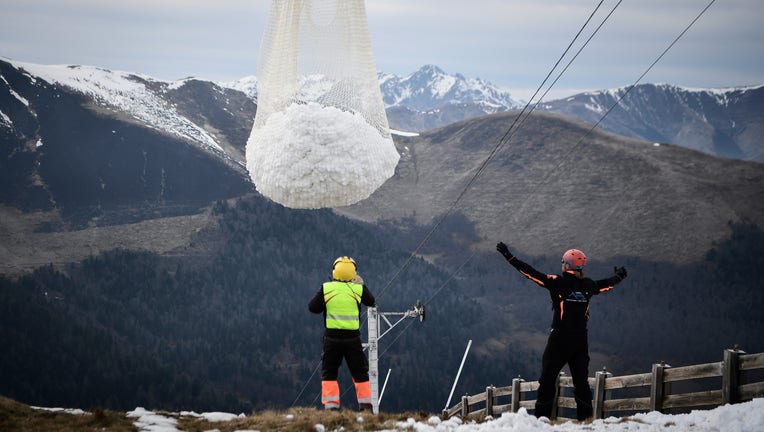 People look at an helicopter carrying snow in order to place it on a ski slope in the Superbagneres station, near Luchon, in French Pyrenees mountain southwestern France, on February 15, 2020.(Photo by ANNE-CHRISTINE POUJOULAT/AFP via Getty Images)

Luchon, France - A ski resort in France chose to use helicopters to deliver snow to its barren slopes last week after mild weather threatened the facility with closure, triggering outrage from environmental groups.

The Luchon-Superbagnères ski resort in the Pyrenees mountains made the decision on Friday for about 55 tons of snow to be dropped on its slopes, which came from higher up the mountains.

The local council of Haute-Garonne decided to transport the snow at a cost between $5,400 and $6,500, with the director claiming it was a worthwhile investment to send the snow to lower slopes used by beginners and ski schools.

"We're not going to cover the whole resort in snow,” Hervé Pounau told French media, adding that if the snow was not transported a "large part" of the resort would have to be shuttered. Only about 40 percent of the ski area is currently open, France 24 reported. 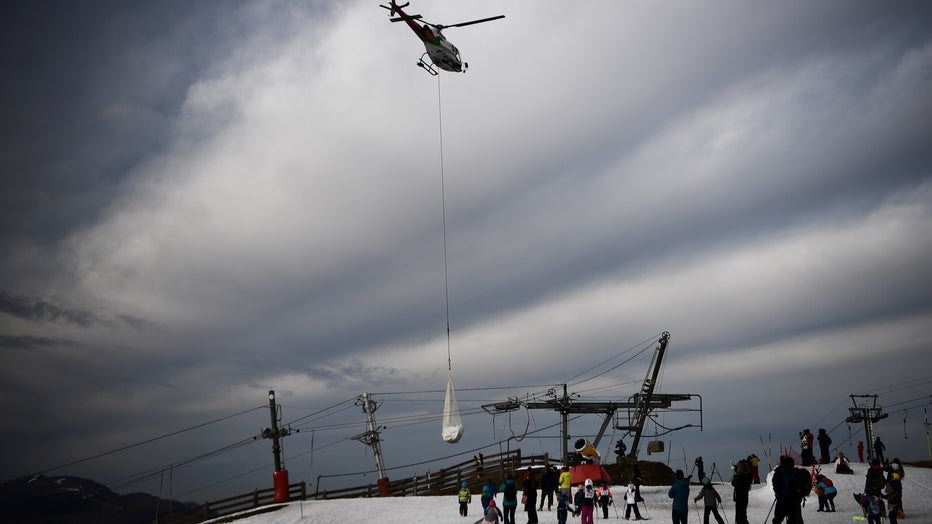 The French department of Haute-Garonne decided to pour snow by helicopter on the Luchon-Superbagneres station in order to make up for the lack of snow on February 14 and February 15, 2020. (Photo by ANNE-CHRISTINE POUJOULAT/AFP via Getty Images)

"Our beginner slopes and ski schools are at their busiest during the holidays," Pounau said Sunday.

The school holidays in February and March are the busiest time of the year for ski resorts in the country, according to the BBC.

The frozen delivery sparked outrage from environmental groups and even some in the French government. An advisor to French Minister of Ecological Transition Élisabeth Borne told Agence France-Presse that "it's not possible to repeat such a highly polluting operation."

“Using helicopters to bring snow to ski resorts is not an option,” Borne said Sunday.

"Instead of adapting to global warming we're going to end up with a double problem: something that costs a lot of energy, that contributes heavily to global warming and that in addition is only for an elite group of people who can afford it," he told French television.

Pounau acknowledged the operation was not “very eco-friendly,” told French media it was an “exceptional move" to keep between 50 to 80 people working through the holidays at the resort.

“We have no intention of doing it again," he said Sunday. "We didn’t have a choice this time,”

Other ski resorts in the  Pyrenees mountains have faced similar barren conditions due to mild temperatures keeping snow away from lower altitudes. The Le Mourtis resort said last week it was forced to close mid-season for the second year in a row due to warm temperatures.

The last time France experienced a start to the year this mild, the country’s national weather service says, was in 1900.