Parts of the U.S. faced the risk of severe weather on Friday, including possible thunderstorms with the threat of tornadoes from the Ohio Valley down to the Mid-South, as well as heavy snow anticipated across the Northern Plains and Great Lakes.

By Friday evening, the National Weather Service announced a tornado watch was issued for parts of Indiana, Kentucky, Mississippi and Tennessee until early Saturday morning.

Scattered, severe thunderstorms are expected to develop Friday evening and will eventually organize into a "squall line" overnight while moving eastward across parts of the lower and mid-Mississippi Valley into the Tennessee and lower Ohio valleys, according to FOX Weather meteorologists.

A squall line is a group of thunderstorms arranged in a line, often accompanied by a group of "squalls" of high wind, heavy rain and possible hail, according to the National Oceanic and Atmospheric Administration's (NOAA) National Severe Storms Laboratory (NSSL). When squall lines form, they can be hundreds of miles long and typically stretch from the north to south.

As a result, forecasters say the highest threat for severe weather on Friday night will be from the mid-South to the lower Ohio Valley, including eastern Arkansas, southeastern Missouri, northern Mississippi, West and Middle Tennessee, western Kentucky, southern Illinois and southwestern Indiana.

This zone also has the highest threat for tornadoes, including the potential for a few strong, long-track tornadoes spawned by supercells, meteorologists say. 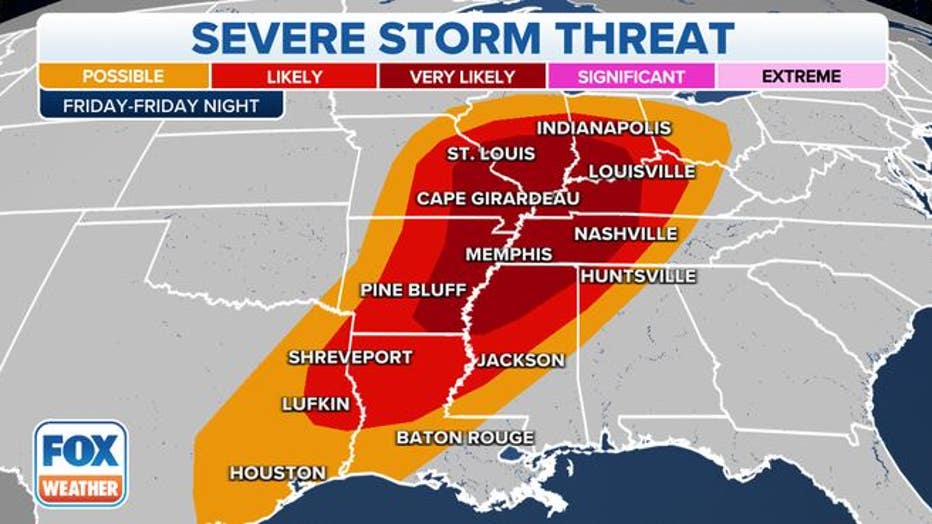 Cities in this highest tornado-threat area include Memphis and Nashville, Tennessee; St. Louis; Louisville, Kentucky; and Evansville, Indiana, according to FOX Weather. Damaging wind gusts over 60 mph are also a serious threat.

By Saturday morning, the squall line will be ongoing ahead of the cold front from the Ohio and Tennessee valleys to the northern Gulf Coast. This line of thunderstorms will move eastward through the day, reaching the Appalachians and parts of the Southeast and mid-Atlantic by late Saturday afternoon.

Damaging wind gusts will be the main threat along the squall line, but an isolated tornado or two remains possible, especially Saturday morning from southern Ohio south-southwestward into central Kentucky and Middle Tennessee, forecasters say.

The severe weather threat is expected to gradually diminish by Saturday afternoon.

RELATED: Snowplow driver shortage: Some US states struggle to hire ahead of winter weather

Meanwhile, parts of the Northern and Central Plains into the upper Mississippi Valley, as well as parts of the Upper Great lakes, could see heavy snow on Friday afternoon.

"The heavy snow will wind down over the Upper Great Lakes on Saturday into Sunday morning. The snow will result in reduced visibility and hazardous driving conditions," the National Weather Service says.

The Pacific Northwest was also expected to see higher elevation snow on Friday, moving into Northern California on Saturday, the NWS said.

RELATED: Snow on the way for Twin Cities: Wiggle room in expected totals