MOSCOW - Ukrainian and Western officials are worried that a Russian military buildup near Ukraine could signal plans by Moscow to invade its ex-Soviet neighbor.

The Kremlin insists it has no such intention and has accused Ukraine and its Western backers of making the claims to cover up their own allegedly aggressive designs.

It’s unclear whether the Russian troop concentration heralds an imminent attack. Russian President Vladimir Putin has pushed for Western guarantees precluding NATO's expansion to Ukraine, and the buildup could reflect an attempt to back up the message.

RELATED: Biden-Putin call: US to warn Russia of economic pain if it invades Ukraine

Here is a look at the current tensions:

What are the roots of the Russia-Ukraine standoff?

Ukraine, which was part of the Russian empire for centuries before becoming a Soviet republic, won independence as the USSR broke up in 1991. The country has moved to shed its Russian imperial legacy and forge increasingly close ties with the West.

A decision by Kremlin-leaning Ukrainian President Viktor Yanukovych to reject an association agreement with the European Union in favor of closer ties with Moscow sparked mass protests that led to his ouster in 2014. Russia responded by annexing Ukraine’s Crimean Peninsula and throwing its weight behind a separatist insurgency that broke out in Ukraine's east.

Ukraine and the West accused Russia of sending its troops and weapons to back the rebels. Moscow denied that, charging that Russians who joined the separatists were volunteers.

More than 14,000 people have died in the fighting that devastated Ukraine’s eastern industrial heartland known as Donbas.

A 2015 peace agreement brokered by France and Germany helped end large-scale battles, but efforts to reach a political settlement have failed, and sporadic skirmishes have continued along the tense line of contact.

Earlier this year, a spike in cease-fire violations in the east and a Russian troop concentration near Ukraine fueled war fears, but tensions abated when Moscow pulled back the bulk of its forces after maneuvers in April. 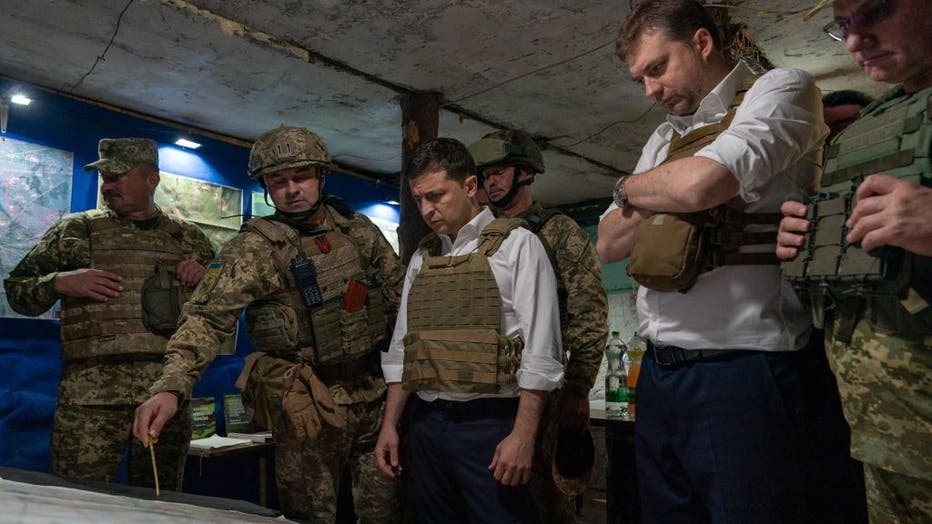 FILE - This picture taken and released by Ukrainian presidential press service on Oct. 14, 2019, shows President Volodymyr Zelensky (C) talking with officers at the map during his visit to Donetsk region. (Photo by STR/AFP via Getty Images)

U.S. intelligence officials last week determined that Russia is planning to deploy an estimated 175,000 troops and almost half of them are already stationed along various points near Ukraine’s border in preparation for a possible invasion that could begin as soon as early 2022.

Ukraine has complained that Moscow has kept over 90,000 troops not far from the two countries’ border following massive war games in western Russia in the fall.

The Ukrainian Defense Ministry said units of the Russian 41st army have remained near Yelnya, a town about 260 kilometers (160 miles) north of the Ukrainian border.

Ukrainian Defense Minister Oleksii Reznikov told lawmakers Friday that the number of Russian troops near Ukraine and in Russian-annexed Crimea is estimated at 94,300, warning that a "large-scale escalation" is possible in January.

Additionally, the commander-in-chief of the Ukrainian armed forces says Russia has about 2,100 military personnel in Ukraine's rebel-controlled east and that Russian officers hold all commanding positions in the separatist forces. Moscow has repeatedly denied the presence of its troops in eastern Ukraine.

Russia hasn't provided any details about its troop numbers and locations, saying that their deployment on its own territory shouldn't concern anyone.

What does Moscow want?

The Kremlin has accused Ukraine of failing to honor the 2015 peace deal and criticized the West for failing to encourage Ukrainian compliance. The agreement was a diplomatic coup for Moscow, requiring Ukraine to grant broad autonomy to the rebel regions and offer a sweeping amnesty to the rebels.

Ukraine, in turn, has pointed to cease-fire violations by Russia-backed separatists and insists there is a continuing Russian troop presence in the rebel east despite the Kremlin's denials.

Amid the recriminations, Russia has rejected a four-way meeting with Ukraine, France and Germany, saying it's useless in view of Ukraine’s refusal to abide by the 2015 agreement.

Moscow has strongly criticized the U.S. and its NATO allies for providing Ukraine with weapons and holding joint drills, saying that encourages Ukrainian hawks to try to regain the rebel-held areas by force.

Earlier this year, Putin ominously said a military attempt by Ukraine to reclaim the east would have "grave consequences for Ukrainian statehood."

The Russian president has repeatedly described Russians and Ukrainians as "one people" and claims that Ukraine has unfairly received historic Russian lands during Soviet times.

Putin has strongly emphasized that Ukraine's aspirations to join NATO represent a red line for Moscow, and also expressed concern about plans by some NATO members to set up military training centers in Ukraine. He said that would give them a military foothold there even without Ukraine joining NATO.

Last week, Putin emphasized that Russia will seek "reliable and long-term security guarantees" from the U.S. and its allies "that would exclude any further NATO moves eastward and the deployment of weapons systems that threaten us in close vicinity to Russian territory."

He charged that "the threats are mounting on our western border," with NATO placing its military infrastructure closer to Russia and offered the West to engage in substantive talks on the issue, adding that Moscow would need not just verbal assurances, but "legal guarantees."

Putin's foreign affairs advisor, Yuri Ushakov, said the Russian leader will push for these guarantees in a video call with U.S. President Joe Biden set for Tuesday, but numerous former U.S. and NATO diplomats say any such Russian demand to Biden would be a nonstarter. Biden himself said Friday that he doesn't "accept anyone's red line."

Is the threat of a Russian invasion real?

Russia rejected talk of an invasion plot as a Western smear campaign and charged the claims could conceal a Ukrainian intention for an attack in the east. Ukraine denies such plans.

Some observers interpret the troop buildup as a demonstration by Putin that Russia is prepared to raise the stakes to convince NATO to respect Moscow’s red lines and stop sending troops and weapons to Ukraine.

Last month, Putin noted with satisfaction that Moscow’s warnings finally have some traction and caused a "certain stress" in the West. He added: "It’s necessary to keep them in that condition for as long as possible so that it doesn’t occur to them to stage some conflict on our western borders that we don’t need."

U.S. officials conceded that Moscow's intentions are unclear, but pointed to Russia's past behavior as a cause for concern.

Biden pledged Friday to make it "very, very difficult" for Putin to attack Ukraine, saying that a set of new initiatives coming from his administration are intended to deter Russian aggression.

Dasha Litvinova in Moscow contributed to this report.