A 37-year-old foreign national has been cited by Italian police, local news media said, after Rome’s iconic Spanish Steps were damaged by a Maserati SUV that took a wrong turn. (Credit: Polizia Roma Capitale via Storyful)

A tourist visiting Rome, Italy, told authorities he took a wrong turn and drove his car onto the country’s historic Spanish Steps, damaging them.

Surveillance video captured the moments a Maserati SUV drove straight onto the staircase and can be seen bumping its way down the stairs as it disappears from view.

From the base of the staircase, another surveillance camera captures what appear to be headlights shining down the right side of the steps and the front of a vehicle can be seen.

A zoomed-in angle of the video footage shows a person with what appears to be a flashlight inspecting the front of the car. 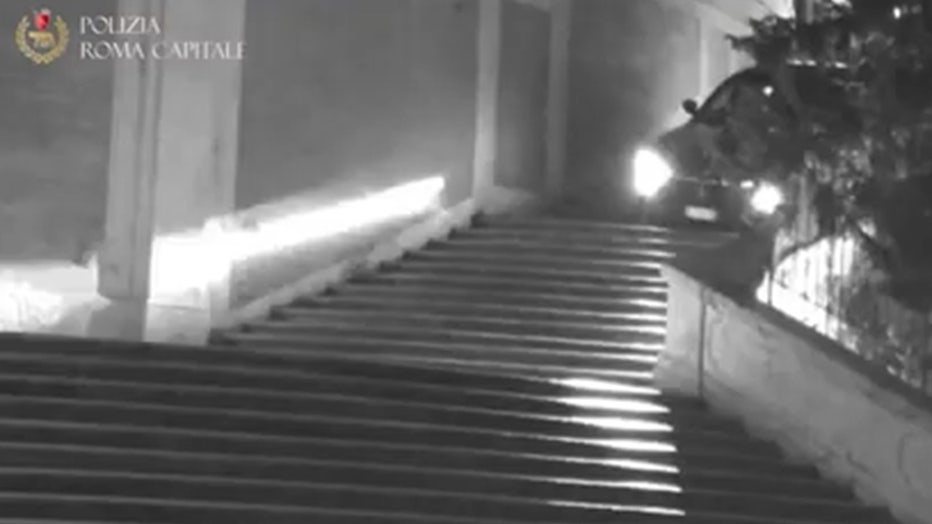 Italian police were able to determine the car was a rental and managed to identify the driver as a 37-year-old man from Saudi Arabia.

The driver was detained after he dropped off the rental car at Milan’s Malpensa Airport.

The man had allegedly told authorities that he had gotten confused by his navigation system which led him to take the wrong turn onto the iconic staircase, according to local news media.

A complaint has been filed against the man which includes aggravated damage to cultural and monumental assets, according to Italian police.

The Spanish Steps were built at the beginning of the 18th century and connect the Piazza di Spagna (Square of Spain) to the Church of Trinità dei Monti.

There are 135 steps that make up the staircase and are a popular tourist attraction. The famous steps were also featured in the 1999 movie "The Talented Mr. Ripley" and "Roman Holiday" filmed in 1953 starring Audrey Hepburn and Gregory Peck, according to IMDB.

Storyful contributed to this report. This story was reported out of Los Angeles.