Rising sea levels could flood more than 600,000 oceanfront properties by 2050

Nearly 650,000 parcels of oceanfront property in the U.S. that currently sit on dry land will be at least partially submerged within 30 years due to rising sea levels from climate change, according to a research study released by Climate Central.

Nearly 650,000 parcels of oceanfront property in the U.S. that currently sit on dry land will be at least partially submerged within 30 years due to rising sea levels from climate change, according to a sobering research study released Thursday by Climate Central.

The effects will strain the pocketbooks of not only the property owners who eventually find themselves under the constant threat of coastal flooding, but also the cities and counties who rely on those property taxes to help fund schools, emergency services and utilities.

Sea levels are forecast to rise through the century as the planet warms. Warmer water occupies more space than cooler water, and melting glaciers only add to the rising tides. 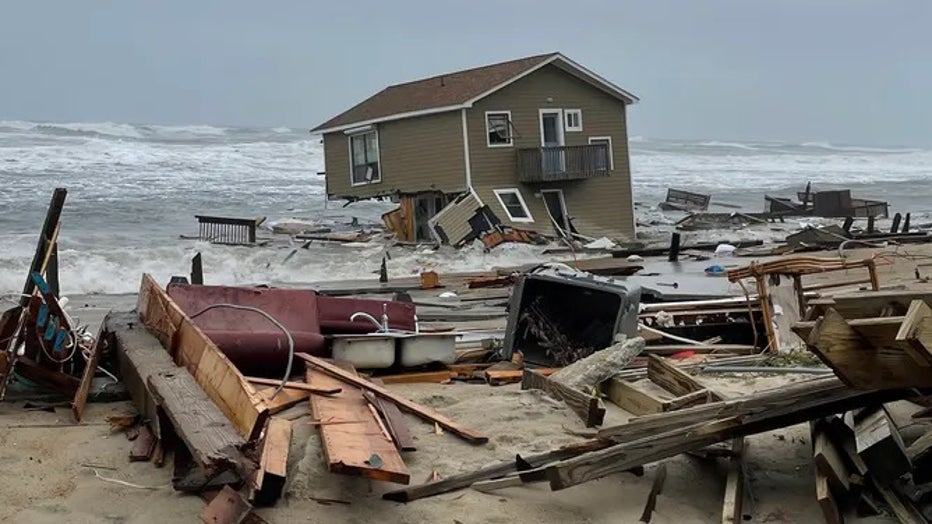 Climate Central analyzed more than 51 million properties vulnerable to a rising sea level and found that by 2050, some 649,000 parcels may have lost some property below the tidal boundary line -- where waters are expected to reach during high tide -- relative to water levels in 2000.

The research found Florida to have the most properties vulnerable to at least partial submersion by 2050, with more than 130,000 at risk. Louisiana was second with more than 106,000 and Texas was third at just under 65,000. 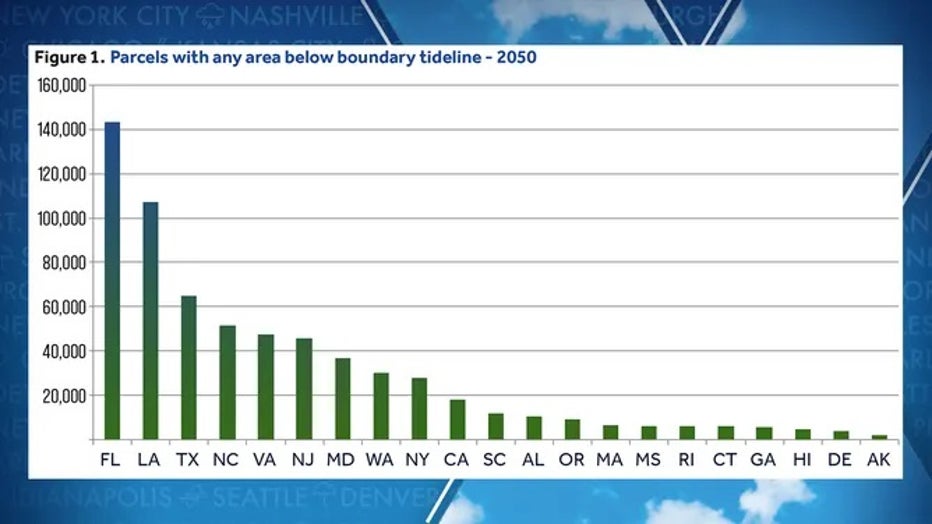 Chart showing parcels partially below the tideline boundary by 2050.

Of those, more than 48,000 properties may be completely submerged during high tides by 2050. 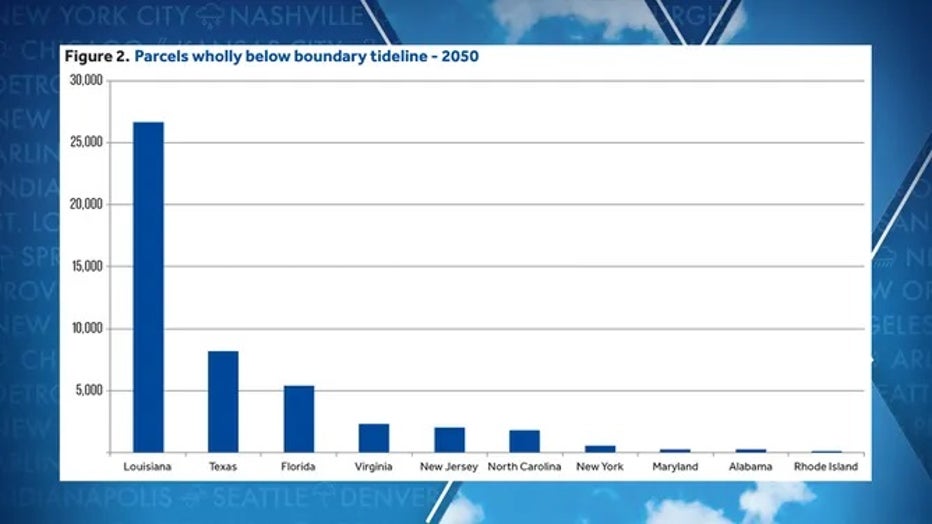 Properties by state forecast to be below the boundary tide lines by 2050. (Climate Central)

"Many of these parcels are owned by families or individuals -- people who will experience the consequences as the sea encroaches on their property," the report said.

Homeowners may not only face more flooding in their homes, but also a reduction in property values as the oceans reclaim more land, exposing homeowners to financial risk.

PLAN, PREPARE, PROTECT: HOW TO BEST COVER YOUR PROPERTY AGAINST FLOODS

The boundary between what is considered state-owned waters and private property along the shores varies by state, but is based on certain tidal boundary levels, as compiled by NOAA data. 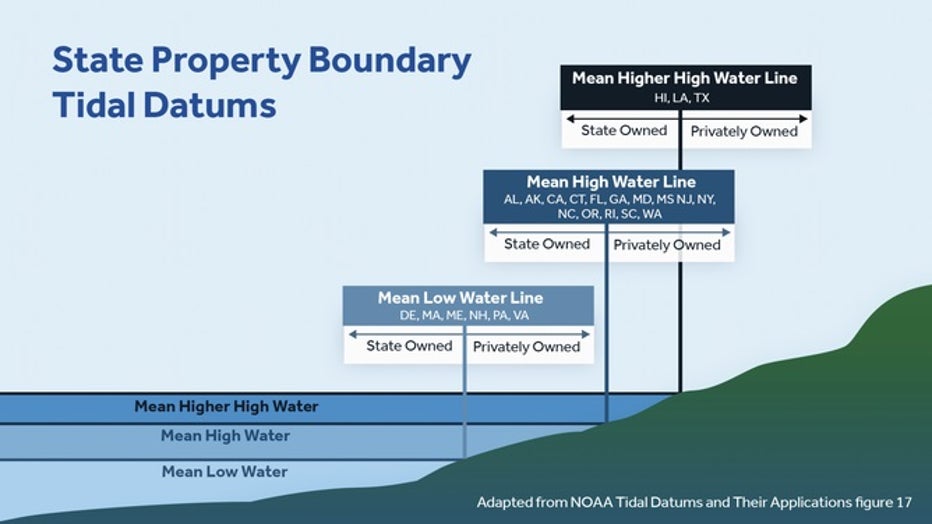 "Essentially, each state designated a land elevation based on different average tidal levels, such as average high tide or low tide lines, to set the boundaries," according to the study.

HOW DO CLOUDS AFFECT THE CLIMATE ON EARTH?

Using the latest research on climate change from the Intergovernmental Panel on Climate Change that assumes the continuation of current carbon emission trends, Climate Central study authors pored over tax assessment data and parcel acreage for 250 waterfront counties, accounting for each state's relevant boundary definitions, to determine potential risk and loss due to rising sea levels.

All told, at least $108 billion of assessed value is at risk by 2100, and due to incomplete value data for some regions, that tally is likely far higher, the study stated.  Even by 2050, Florida is expected to have just over $7 billion worth of property affected by rising sea levels. 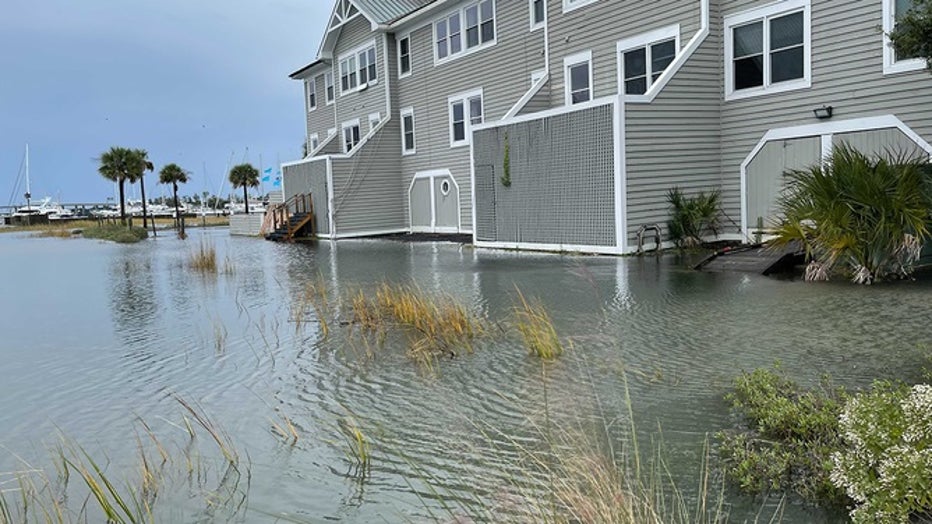 But while the research calculates the potential losses through the year 2100, the authors focused on the anticipated effects by 2050 for the report as the date falls within the range of new 30-year mortgages "to emphasize the imminent risks for homeowners and coastal communities."

Climate Central found that an additional 4.4 million acres may be below the tidal boundary by 2050 -- roughly 3/4 the size of New Jersey -- with Louisiana making up half the lost acreage. Florida, Texas and North Carolina combine with Louisiana to make up 87% of the expected acreage loss. 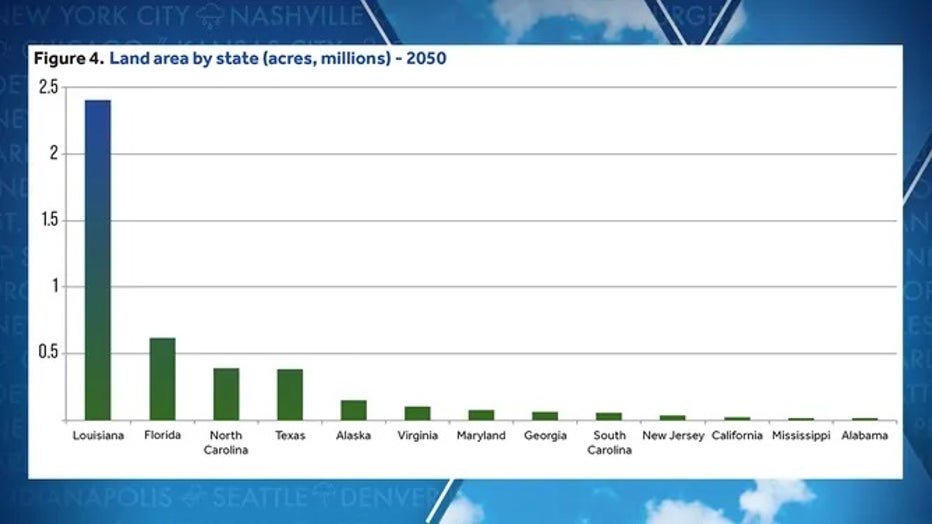 Eleven parishes are expected to have 40% or more of their land affected by 2050, with Terrebonne Parish at over 76.6% and Lafourche Parish at 60.9%.

Percent of county land area lost in by 2050

By 2050, 30 counties/parishes will have more than 10% of their land area affected, totaling more than 3 million acres.

Some of the more populated counties and parishes on the list include Orleans Parish, home to New Orleans; Galveston County, home to Galveston, Texas; Miami-Dade and Monroe counties in Florida that include the Miami shores, and New Jersey's Hudson County in the New York City metro area.

HERE’S WHAT TO DO AFTER YOUR CAR IS FLOODED

If you expand the impact to 5% of the area affected, 54 counties and parishes make up 83% of all affected areas.  Climate Central has produced an individual report of each county and parish included in the study, which you can find at this link.

"The seas are rising and we are getting used to this concept of coastal flooding, but now we’re seeing permanent flooding," Climate Central Project Lead Don Bain told FOX Weather. "And one of the consequences of that is that the lines we use to divide between private popery and public waters and public tide lands is shifting. So we are going to have to get used to the idea that we are losing something to the sea and that is not only devastating to property owners, but it's rough on our local commutes who depend upon property taxes to fund their operations and to fund our schools."

'Where flooding was once the exception is now the rule'

The report warned of an impending reality where thousands of oceanfront buildings nestled as close to the shore as possible while maintaining what has been a safe distance from the water line eventually find themselves below the water line.

The report outlines about 84,500 homes and buildings will be in the flood zone by 2050. 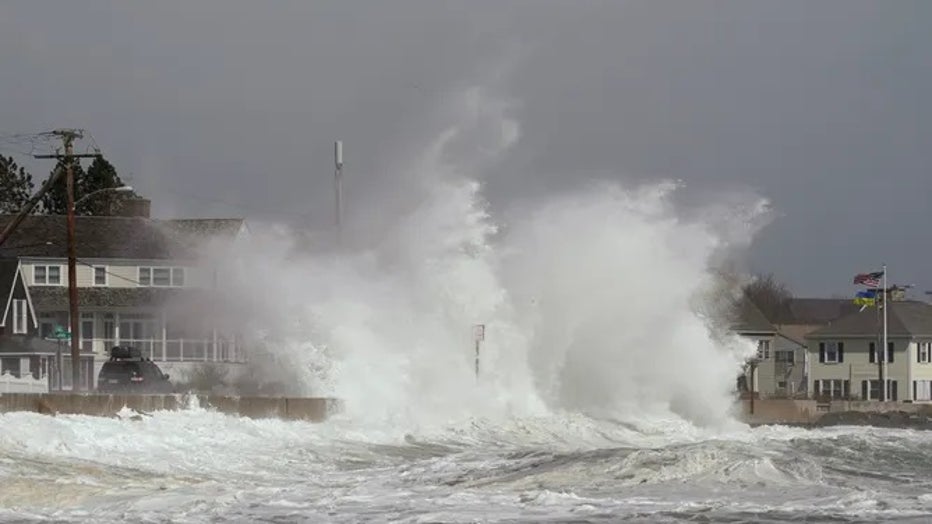 Waves break over the sea wall at Middle Beach in Kennebunk as a car drives along Beach Avenue during high tide on Tuesday, April 19, 2022. (Gregory Rec/Portland Press Herald / Getty Images)

"People have historically built as close to the ocean as possible while remaining above the observed tides -- an outdated strategy based on the assumption that the sea level remains stable," the study's authors wrote. "Once rapidly rising seas breach a certain threshold, these densely-developed landscapes reach a tipping point where flooding was once the exception is now the rule."

A downward spiral for city and county budgets

The impacts of rising sea levels go far beyond the direct costs of damaging floods to buildings. Cities and counties will face ever-increasing costs related to increased flooding, such as:

Meanwhile, just as expenses increase, cities may be losing tax revenue. As waterfront residents lose land to sea, they will object to being taxed on property no longer owned, reducing tax revenue to the city and county. Sea-flooded businesses can also petition for a reduction in property taxes due to flood-related devaluations of property.

"So just at the time (cities) are spending more, they’re losing revenue, which is a terrible combination," Bain said. 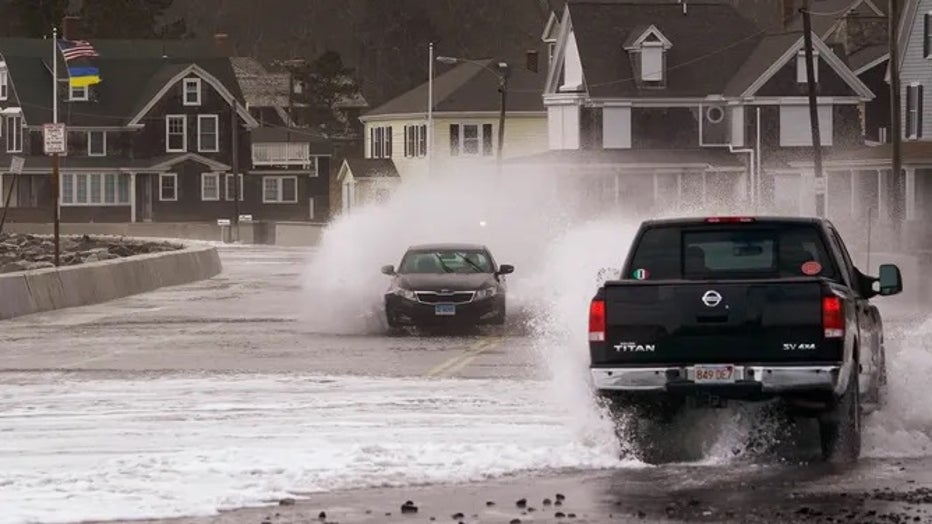 Those fights over how, when and whether legal boundaries will be adjusted in response to tidal changes is "very much an open question," the study noted. It is already a complex process to determine land-sea boundaries, and rising sea levels and their implications on tax revenue and infrastructure maintenance will only become more exacerbated.

Any lower tax revenue not only hamstrings municipalities dealing with the added flooding, but also reduces funds available for schools, emergency services, transportation and other crucial taxpayer-funded services.

How cities respond – or fail to respond – may also impact their ability to repay debt and suffer lower credit ratings, the report warned.

"This pattern sends a critical warning: while change might seem relatively slow and manageable in many places today, we are soon headed for a very different world," the study stated. "Planning, preparation and prevention will be required to avoid a lot of pain."

What can be done?

The study offers four options for government entities to reduce the risk of rising sea levels.

First, they suggest adjusting land policies to encourage development outside new risk zones and limit growth in areas where sea levels are expected to rise. Second, cities and counties should invest in improving stormwater systems, raising roads, building levees or improving coastal wetlands, "that will, at least for a time, help protect the tax base," the authors wrote.

They encourage participation in the National Flood Insurance Program and Community Rating Systems incentives to provide financial resilience for residents and educate local residents, so they can help adapt their local economy and tax base to rising seas.

There is one primary way to prevent impacts from rising sea levels, according to the study – ultimately, reducing and eventually eliminating carbon pollution.

"We have a choice between some better outcomes and some worse outcomes," Bain said. "And we’re hoping that we get a hold of this problem and get to some lower emissions rates so that we have a chance to adapt. If we don’t, we run the risk of creating rising seas that are rising faster than our capacity to adapt to them."