The City Council hired engineers to study the problem of replacing part of the BQE. That firm has come proposed two options, including a tunnel bypass. Reported by Sharon Crowley

NEW YORK - A stretch of the aging and congested Brooklyn–Queens Expressway that passes through several neighborhoods in Brooklyn is in dire need of replacement. Engineers say it was never built for its current volume of traffic.

The debate over what needs to be done has been dragging on and on. (A panel formed by Mayor Bill de Blasio recently called for reducing the highway's six lanes to four.) The City Council decided to hire engineers to study the problem and come up with some possible solutions.

"New York cannot continue to kick the can down the road on redeveloping the BQE," Council Speaker Corey Johnson said in a statement. "This is not just about rebuilding a highway, this is a once-in-a-lifetime opportunity to build the city we deserve and need in the future."

On Monday, the City Council released a report narrowing the path for moving ahead to two ambitious, expensive, and complicated options: either a tunnel bypass or a capped highway. 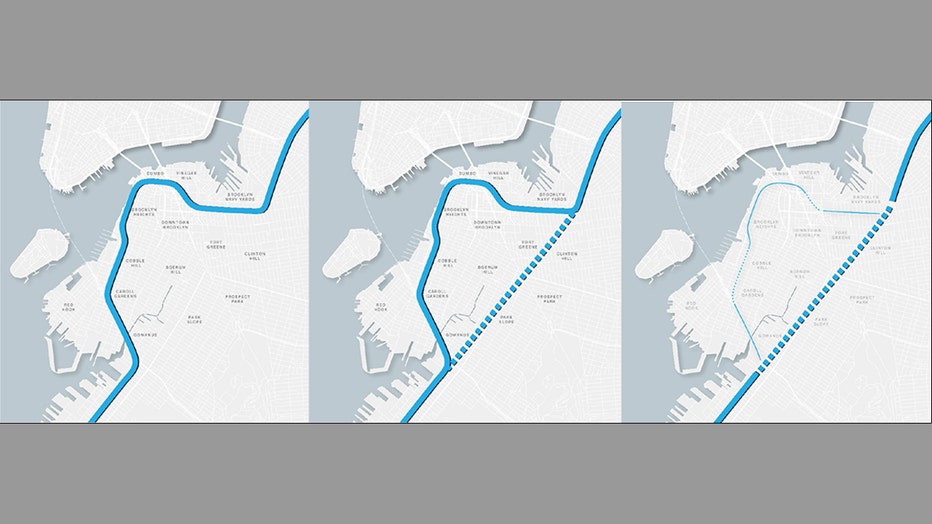 The conceptual phasing of the current Brooklyn-Queens Expressway, the construction of a tunnel that would bypass Downtown Brooklyn, and the removal of existing infrastructure. (New York City Council, "The Future of the BQE")

The tunnel bypass option would feature a three-mile tunnel running underground from the Gowanus Canal to the Brooklyn Navy Yard. A massive tunnel-boring machine would be used to make it.

>ALTERNATE PLANS FOR BROOKLYN–QUEENS EXPRESSWAY RECONSTRUCTION ON THE TABLE

"We now have the technology to do a tunnel, like this, where it can go deep underground into the bedrock, there's a boring machine that can do it with minimal destruction on the surface so it's not like it would be the 'Big Dig' Brooklyn-style," Council Member Stephen Levin, referring to Boston's infamous 25-year project nicknamed the Big Dig.

But some critics are saying that a tunnel would be too costly would take too long.

"I think the tunnel proposal is great if we can snap our fingers and have a tunnel built," Sam Schwartz, a transportation expert, told FOX 5 NY. "The problem with the tunnel is, it takes more than a decade to build, it'll cost an excess of $10 billion."

City Council members will have a chance to review all the ideas presented in the report. And any plan chosen to fix the BQE will also require approval and funding from the state and the federal government.

>PART OF BROOKLYN–QUEENS EXPRESSWAY COULD BE CLOSED FOR YEARS