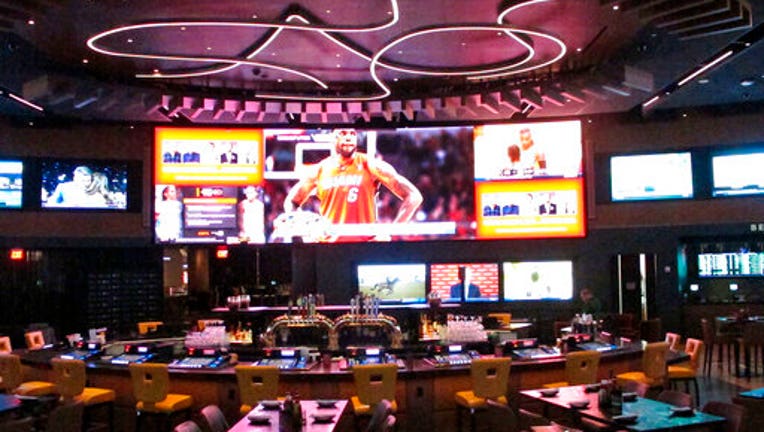 This Friday, June 28, 2019 photo, shows the Borgata casino's new sports betting lounge which is set to open to the public the following day in Atlantic City, N.J. The Borgata and Bally's are opening expanded sportsbooks worth more than $20 million. (

NEW YORK - A company that most of the legal U.S. sports betting industry uses to verify that its customers are where they say they are reports a record number of transactions over the first weekend of the NFL season.

That helps confirm an expected a big increase in the level of online betting as football season got under way in a nation with many more places to bet this year.

That represents a 126% increase from the same period of the 2020 NFL season, when GeoComply processed 25.8 million transactions.

"We expected high volumes, but what we have seen has surprised us nonetheless," said Lindsay Slader, a managing director with Geocomply. "The level of demand across new markets, such as Arizona, indicates that consumers have long waited for the option to legally place a sports bet."

The data records the amount of times the company was called on to verify a customer's location. It is considered a good indicator for at least a minimum level of sports betting activity, more than 80% of which is done online in the U.S.

States require a gambler to be physically located within their borders in order to make an online sports bet, which is where geolocation technology comes in. It uses a combination of cell phone data, software, hardware, and databases to determine where a phone or laptop trying to make a bet is actually located.

While it is true that customers can log in and have their location verified without actually placing a bet, many gamblers also make more than one bet after a single log-in.

When Thursday night's game between the Tampa Bay Buccaneers and the Dallas Cowboys kicked off, 26 states plus Washington, D.C. offered legal sports betting, according to the American Gaming Association, the gambling industry's national trade group. But not all of them offer online sports betting.

That was up from 18 a year ago at the start of last year's football season.

GeoComply says it saw the most activity in New Jersey; Pennsylvania; Michigan, Arizona and Illinois.

Arizona, which launched its sports betting on Thursday, has seen more than 6.1 million geolocation transactions from more than 271,000 newly-created accounts since then, the company said Monday.

"Arizona, in its first day on Thursday, had more wagered online than mature states like Michigan, Colorado and Tennessee at the FanDuel Sportsbook," spokesman Kevin Hennessy said.