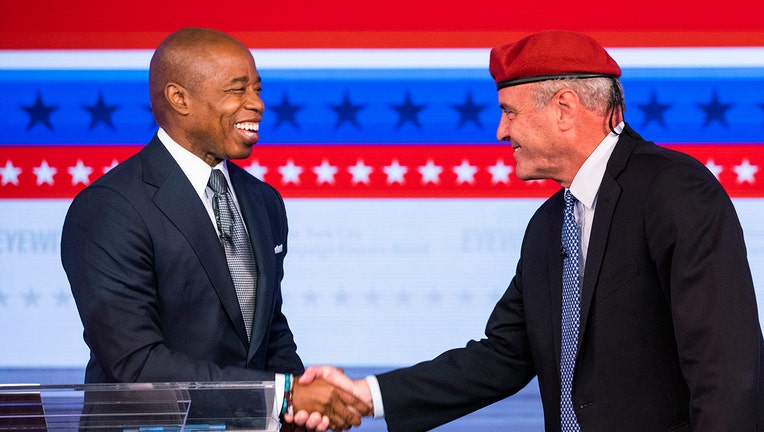 NEW YORK (AP) - The candidates running to become New York City's mayor lobbed accusations at each other about palling around with gangsters and acting like children or clowns, but their second debate ended on a surprisingly tender note involving cats and veganism.

A week before the city of 8.8 million people votes to pick a new mayor, Democrat Eric Adams and Republican Curtis Sliwa laid out their plans Tuesday for addressing rising violent crime in the city and how to chart a path out of the pandemic's deadly wake.

It was the second meeting between Adams, the Brooklyn Borough president and former New York City police captain who is widely expected to win the election in the heavily Democratic city, and Sliwa, the founder of the Guardian Angels anti-crime patrol. Sliwa is known for his signature red beret, his streetwise proclamations and his penchant for stunts.

The hourlong debate between two men who have made crime and trustworthiness a focus of their campaigns was at times chippy, unfriendly and even absurd enough to make one stone-faced journalist giggle while posing a question.

On the pandemic, Adams supports a mandate from outgoing Mayor Bill de Blasio that city workers such as police officers and firefighters get vaccinated against COVID-19 or be placed on unpaid leave. But Adams said he would have had more discussions with the workers' unions before announcing the policy. Sliwa decried the rule and repeatedly tried to yoke Adams to the unpopular de Blasio.

"You're acting like my son when he was 4-year-old," Adams retorted.

Adams repeated his dismissal of Sliwa as "a clown" who admitted to fabricating his own kidnapping and some of the exploits of the Guardian Angels decades ago.

Sliwa responded by making a sarcastic joke about being "Pagliacci" at Lincoln Center, a reference to the Italian opera about a sad clown.

He then accused Adams of secretly living in New Jersey, seizing on news reports that questioned whether Adams lives at his Brooklyn brownstone or with his partner at an apartment they co-own in Fort Lee, New Jersey.

"I'd like to know where you actually live because you keep faking that," Sliwa said.

Adams, who would be the city's second Black mayor, defended his nuanced support for the controversial stop-and-frisk policing practice as a useful tool that had been misused by police to disproportionately target people of color.

Sliwa accused Adams of being missing-in-action during street scuffles with protesters last year over racial injustice and criticized Adams for an interview he gave Tuesday morning in which he described meeting with gang members to try to address violent crime and "collaborate with them."

"Did you stop, question and frisk them?" Sliwa asked. "I think the public has the right to know, for someone who declares himself to be the law-and-order candidate."

After a string of testy exchanges, the two men were asked to pay each other compliments as they wrapped up the debate.

Adams complimented Sliwa for adopting and rescuing cats, 16 of which he and his wife keep in their small Manhattan apartment.

"I commend him for what he's doing around cats," Adams said.