NEW YORK - Four days of celebrations honoring Queen Elizabeth II’s 70 years on the throne were underway Thursday with a display of British military traditions stretching from the days of horse and cannon to the jet age.

Formal celebrations for the Platinum Jubilee begin with Trooping the Color, an annual military review that has marked the sovereign’s official birthday since 1760. The queen is expected to join the working members of her family on the balcony of Buckingham Palace at the end of the event, when 70 aircraft are set to roar overhead.

The jubilee is being commemorated with a four-day holiday weekend. The celebration of Elizabeth's reign includes a service of thanksgiving Friday at St. Paul’s Cathedral in London, a concert at Buckingham Palace on Saturday and a pageant staged by thousands of performers drawn from schools and community groups around the country on Sunday afternoon.

Throughout the weekend, neighborhood organizations and individuals are expected to hold thousands of street parties around the country, repeating a tradition that began with the queen’s coronation in 1953. 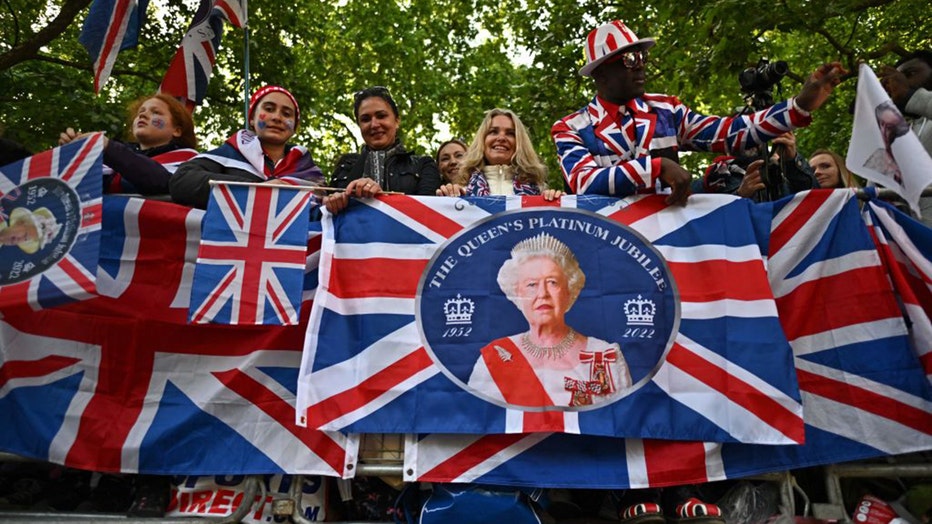 TOPSHOT - Royal fans line the Mall as they wait for the trooping of the colour as part of Queen Elizabeth II's platinum jubilee celebrations, on June 2, 2022, in London. (Photo by BEN STANSALL/AFP via Getty Images)

The 96-year-old queen is Britain's longest-reigning monarch and the first to reach the milestone of seven decades on the throne. The jubilee is giving many people — even those often indifferent to the monarchy — a chance to reflect on the state of the nation and the huge changes that have taken place during her reign.

Former Prime Minister John Major — one of the 14 prime ministers of the queen's reign — said the monarch's stoic presence had helped steer the country over the decades.

"The queen has represented our better selves for over 70 years," he told the BBC.

In a written jubilee message, the queen thanked people in Britain and across the Commonwealth involved in organizing the celebrations. For many, the occasion is the first opportunity for a big bash since the start of the coronavirus pandemic more than two years ago.

"I know that many happy memories will be created at these festive occasions," Elizabeth said.

"I continue to be inspired by the goodwill shown to me, and hope that the coming days will provide an opportunity to reflect on all that has been achieved during the last 70 years, as we look to the future with confidence and enthusiasm," she said.