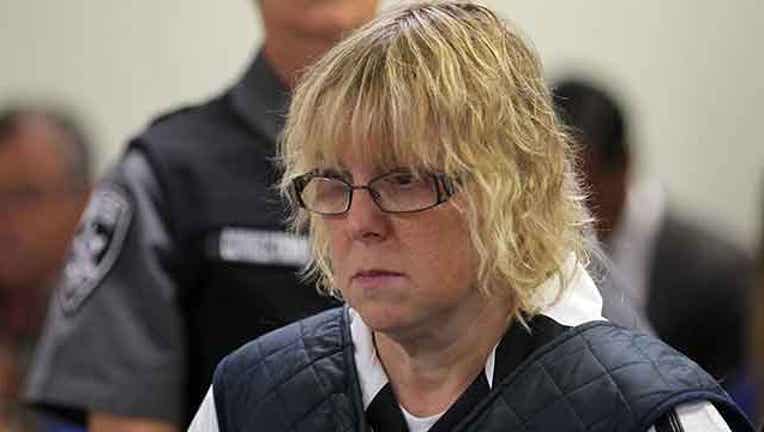 PLATTSBURGH, N.Y. (AP) — A prison worker who was "in over her head" with two inmates convicted of murder tearfully pleaded guilty Tuesday to charges of aiding them by smuggling hacksaw blades and other tools to the pair, who broke out and spent three weeks on the run.

Joyce Mitchell, an instructor in the tailor shop at the Clinton Correctional Facility in upstate New York, wore shackles and prison stripes as she entered the pleas in a barely audible voice.

Afterward, her lawyer, Stephen Johnston, said she realizes she made a "horrible mistake" by getting involved with Richard Matt and David Sweat, who staged an elaborate escape from the maximum-security prison on June 6.

"She got in over her head into something that she never should have started. But she did, and she's paying the price now," Johnston told reporters outside court. "I think that to a certain extent, Matt got her to feeling good about herself, better than she had for a period of time, and she was swept off her feet a bit. ... And then when she realized who she was dealing with, everything changed."

Matt was shot and killed by searchers June 26, about 30 miles west of the prison. Sweat was captured near the Canadian border two days later and sent to another prison.

District Attorney Andrew Wylie said separate cases against Sweat and a Gene Palmer, a guard who investigators accuse of unwittingly helping the two inmates, are expected to go before a grand jury next month.

"At this time, there are no other individuals who have been identified through the investigation as being involved directly or indirectly" with the June 6 escape, Wylie said.

Prosecutors say Mitchell provided hacksaw blades, chisels, a punch tool and a screwdriver to Matt on May 1. Authorities say she became close with the pair and agreed to be their getaway driver. But she backed out at the last moment, forcing the two to flee on foot after they emerged from a manhole near the prison.

Investigators also said Mitchell had discussed killing her husband, Lyle Mitchell, as part of the plot.

Lyle Mitchell was in court Tuesday and declined to speak with an Associated Press reporter.

Wylie said a grand jury could have considered other counts against Joyce Mitchell, including conspiracy to commit murder and sexual-related charges based on allegations involving the inmates. But he said he accepted pleas on two clearly provable charges — first-degree promoting prison contraband, a felony, and fourth-degree criminal facilitation, a misdemeanor— "in the interest of justice."

The deal requires Mitchell to cooperate with a probe by the state inspector general.

Authorities said Joyce Mitchell smuggled the tools into the prison by hiding them in frozen meat she placed in a refrigerator in the tailor shop. They said Palmer then took the meat to Sweat and Matt, who were housed in a section where inmates are allowed to cook their meals.

Authorities do not believe Palmer knew of the escape plan. He was released on bail after being arrested on charges including promoting prison contraband.

Mitchell, who was arrested June 12, resigned from her job but remains eligible for a pension, corrections officials said.

Matt and Sweat cut through their adjoining cell walls over months, climbed down catwalks to tunnels and broke through a brick wall. They then cut into a steam pipe and cut a chain holding a manhole cover outside the prison to get away, authorities said.