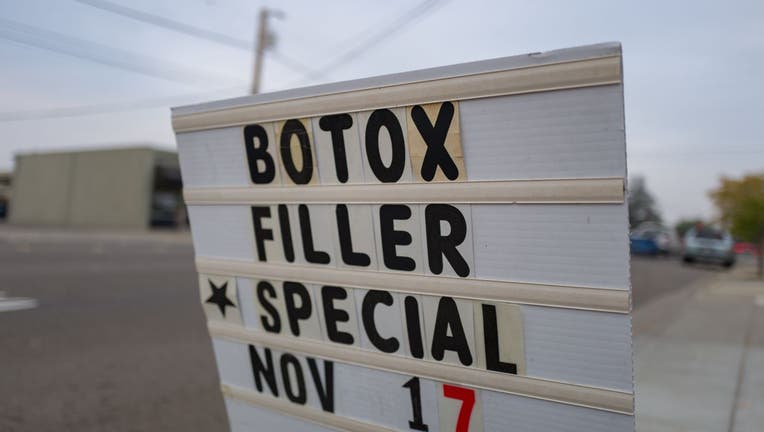 Sign advertising Botox filler injections on sale as part of a holiday promotion at a medical spa in Livermore, California, November 19, 2018. (Photo by Smith Collection/Gado/Getty Images)

The plastic surgery industry is booming during the coronavirus pandemic, largely due to the increase in the number of virtual meetings offered through Zoom and other video web services.

Call it the "Zoom boom."

The interest in cosmetic surgery is boosting appointments for Botox, lip fillers and other perk-up procedures that help people feel younger and fresher on computer screens.

"We are getting swamped," Chicago plastic surgeon Dr. Peter Gelder told FOX Business. "What we’re seeing is that a lot of people, when they’re in Zoom meetings, they should be listening to the content and paying attention to what’s going on, but they’re not."

Instead, they spend the entire time gazing at themselves and wondering what they would change, according to Gelder. As a result, he has seen "a huge increase in the number of people who look at themselves constantly and are drawn to their own image."

The interest in cosmetic procedures, both surgical and nonsurgical, has increased during the pandemic.

Another reason that cosmetic procedures are more popular than ever is likely attributed to more downtime that can be used as healing time for invasive procedures. The rise in work from home flexibility has afforded many people the luxury of recovering at home without having to take time off.

At the same time, the at-home lifestyle has helped people save money, since higher-cost activities like traveling abroad, for example, have become significantly less popular due to the pandemic, allowing for more opportunities to splurge on facelifts and nose jobs.

Tehrani said he has seen an increase in plastic surgery across the board, but the nose and neck areas have drawn the most attention. On top of the growing demand, clients are requesting more improvement in one sitting. Rather than subtle injections over several visits, people can afford to take on multiple procedures at once.

"People want to get more of a result because they have their mask on and don’t care if they’re swollen for longer," Tehrani said.