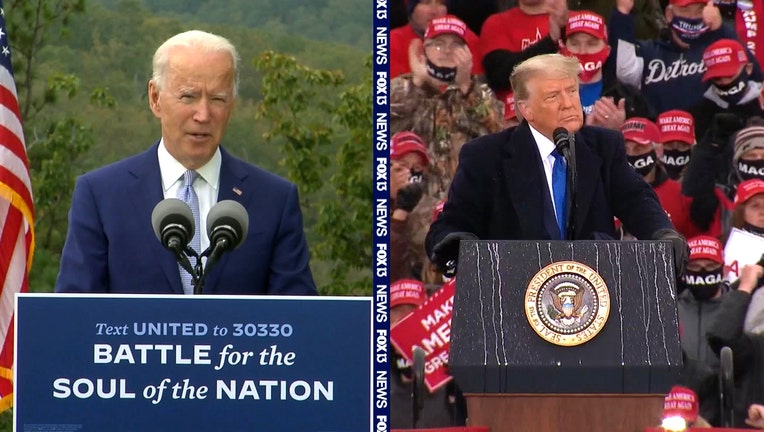 Less than a week before Election Day, the electorate’s outlook is gloomy. More than 6-in-10 rate economic conditions negatively and only about 2-in-10 think coronavirus is under control in the U.S., according to the latest Fox News national survey of likely voters.

In fact, just over half, 51 percent, say it is “not at all” under control -- up from 40 percent in early September.

When asked what should be the federal government’s top priority, voters are 25 points more likely to rank limiting the spread of coronavirus over restarting the economy (61-36 percent).

Who do voters trust to handle these competing issues? President Donald Trump is preferred on the economy by just 1 point, while more trust Democratic candidate Joe Biden on coronavirus by 16 points.

Biden’s current advantage on coronavirus is double the 8-point edge he held last month. At the same time, Trump’s edge on the economy declined by 4 points.

“The pandemic has complicated the president’s plan to run for re-election on the economy,” says Republican pollster Daron Shaw, who conducts the Fox News survey with Democrat Chris Anderson. “COVID-19 is the dominant issue for voters and they think Biden would do a better job.”

By a 6-point margin, more pick Biden over Trump on handling Supreme Court nominations. Biden’s advantage is unchanged since September, before Amy Coney Barrett’s confirmation to the high court.

In the head-to-head matchup, Biden leads Trump by 52-44 percent among likely voters. That’s a bit tighter than the race was three weeks ago, when Biden led by 53-43 percent (October 3-6).

The survey, released Sunday, asked about several candidate traits and finds over half think Biden cares about people like them (56 percent) and is honest and trustworthy (52 percent). For Trump it’s the reverse, as majorities say he lacks empathy (56 percent) and honesty (60 percent).

Notably, the president’s honesty marks are identical to those he received just before he went on to win the 2016 election. At that time, 37 percent of likely voters said Trump was honest and trustworthy and 60 percent disagreed (November 3-6, 2016). Voters also said Hillary Clinton was dishonest (33 honest vs. 64 dishonest). This time, a 52-percent majority sees the Democratic candidate as honest and trustworthy (45 percent disagree).

Ratings of the two candidates more closely align on “standing up for what he believes.” Sixty-four percent think Biden does -- and even more, 68 percent, say the same about Trump.

When asked if the word “corrupt” describes the candidate, 56 percent say it applies to Trump compared to 40 percent for Biden.

Over half (53 percent) think Trump is “too close to extremist” groups, while 37 percent feel that way about Biden.

One Republican in five thinks Trump is corrupt (19 percent) and that he is too close to extremist groups (20 percent).

Among Democrats, about 1-in-10 thinks Biden is corrupt (12 percent) and feel he is too close to extremist groups (11 percent).

While 41 percent of registered voters think the disruption that Trump has brought to Washington is a good thing, an even larger number, 51 percent, don’t like it. Among Trump supporters, 85 percent see his disruption as a positive thing. Ninety-one percent of Biden supporters call it a bad thing.

Nearly half of registered voters, 47 percent, think Trump will win re-election. That’s down from 51 percent in September -- and a high of 56 percent who believed he would win in February.

Almost as many, 46 percent, think he won’t be reelected.

Conducted October 27-29, 2020 under the joint direction of Beacon Research (D) and Shaw & Company (R), this Fox News Poll includes interviews with 1,318 randomly chosen registered voters nationwide who spoke with live interviewers on both landlines and cellphones. The survey includes results among 1,246 likely voters. The poll has a margin of sampling error of plus or minus 2.5 percentage points for both registered and likely voters.