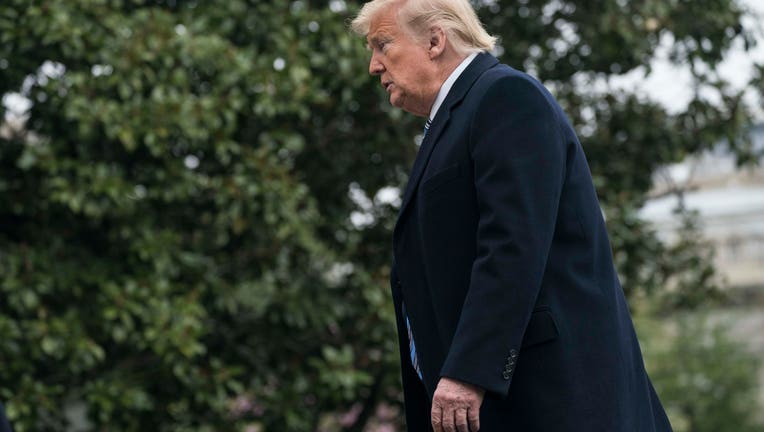 U.S. President Donald Trump arrives back to the White House on March 28, 2020 in Washington, DC. President Trump traveled to Norfolk, Virginia to attend a departure ceremony for the U.S. Navy hospital ship USNS Comfort, which is sailing to New York C

WASHINGTON (AP) — Americans give high marks to state and local governments for their handling of the fast-moving coronavirus pandemic that has swiftly remade everyday life. But less than half approve of the job done thus far by President Donald Trump and the federal government, according to a new survey from The Associated Press-NORC Center for Public Affairs Research.

Even so, and while he remains deeply polarizing, the poll finds Trump’s approval ratings are among the highest of his presidency. Forty-four percent of Americans support Trump’s oversight of the pandemic, in line with his overall 43% approval rating. That’s at the high end for the Republican president during his more than three years in office.

The coronavirus pandemic, which has already killed more than 4,000 Americans and shut down much of the U.S. economy, is the most urgent and unpredictable crisis of Trump’s presidency. The coming weeks will likely shape how Americans view the wisdom of giving him a second term in the November election, where he is likely to face off against former Vice President Joe Biden.

Trump initially downplayed the virus, comparing it to the flu. He also suggested restrictions on work and travel could be lifted by mid-April, arguing that the response to the virus shouldn’t be worse than the health crisis itself.

But the president has shifted his stance again in recent days, and on Tuesday, the White House estimated up to 240,000 Americans could die from coronavirus even if strict social distancing measures are maintained. If those steps aren’t taken, the number of deaths seems certain to increase.

“I want every American to be prepared for the hard days that lie ahead,” Trump said.

Trump’s approval ratings are propped up by strong support from Republicans: 82% back his handling of the pandemic. Democrats remain overwhelmingly opposed to the president, with just 14% of Democrats supportive of his actions in recent weeks.

The president, whose lengthy press conferences from the White House have been broadcast daily throughout the crisis, rates higher than both the federal government as a whole and the U.S. Congress, which just approved $2.2 trillion in emergency funding for major industries, small businesses and individuals. Lawmakers are already discussing additional ways to stabilize the economy as the pandemic appears likely to stretch deep into at least the spring or summer.

Americans have a far more favorable opinion about the response efforts by their state and local governments — positive feelings shared across the political spectrum. More than half of Americans, including 56% of Democrats and 65% of Republicans, say their states are managing the outbreak well.

Judy Kunzman, 73, a retired nurse in Lower Swatara Township, Pennsylvania, is among those who says her state government's response is superior to that of the president and federal government.

"I keep thinking of Harry Truman and how he always said, ‘The buck stops here.’ Our president says, ‘I’m not taking responsibility for that,’” Kunzman said. She said that while Trump appears to be taking the matter more seriously in recent days, his response still leaves a lot to be desired.

“When you have to be pushed to the edge before you do the almost correct thing, that’s not an improvement,” Kunzman said.

State and local governments have much of the power to shape the response in their locales, determining what businesses remain open, how long schools will be shuttered and what penalties there are, if any, for those who violate stay-at-home or similar orders. That’s led to a patchwork of restrictions, with major cities including New York, Chicago and San Francisco virtually shuttered. More than 30 states issued stay-at-home orders more than a week ago, while Florida’s governor resisted doing so until this week, even as coronavirus cases rose in the state.

Trump, too, initially resisted recommendations from public health officials to extend social distancing measures through at least April. Florida Gov. Ron DeSantis said Wednesday he decided to abandon his county-by-county approach for a statewide order after consulting with Trump.

The poll shows that a large majority of Americans, 78%, back requiring Americans to stay in their homes except for essential errands. Roughly the same amount also favor restricting travel within the U.S. and requiring bars and restaurants to close.

Those numbers reflect a sharp increase in public concern over the virus within the past six weeks. Half of Americans now say they are extremely or very worried about either themselves or a family member being infected by the virus. That compares with 31% who said the same just two weeks ago and 22% who said so six weeks ago, when more Americans were concerned about the flu.

Susan Oldfield, a 68-year-old retiree in rural Jesseville, Arkansas, said she trusts the guidance from the federal government and wishes more people did.

The AP-NORC poll of 1,057 adults was conducted March 26-29 using a sample drawn from NORC's probability-based AmeriSpeak Panel, which is designed to be representative of the U.S. population. The margin of sampling error for all respondents is plus or minus 4.1 percentage points.