WASHINGTON - "This is going to be a very, very painful two weeks," President Donald Trump said Tuesday in a coronavirus task force press briefing from the White House, marking a notable change in tone in his view of the coronavirus pandemic that is sweeping across the United States, inundating hospitals and claiming thousands of lives.

"You people are just incredible, they really are, they're very brave," Trump said in reference to the efforts of health care workers.

Dr. Deborah Birx also discussed models that showed how without mitigation efforts, the projected death count in the U.S. was between 1.5 and 2.2 million. With effective mitigation efforts, Birx said those numbers could drop to between 100,000 and 240,000, which was still "too much," she noted.

In another data projection, Birx showed how strong mitigation efforts in states like Washington and California had helped to keep the cumulative cases per 100,000 residents relatively low.

Birx stressed how crucial the next two weeks will be in mitigation actions and that it will require a community-by-community effort.

Birx also highlighted how the number of daily new cases in Italy had begun to drop, a potential sign of hope.

"There is no magic vaccine or therapy. It's just behaviors, each of our behaviors translating into something that changes the course of this viral pandemic over the next 30 days," Birx said.

Dr. Anthony Fauci reiterated earlier comments made by Birx and the president. Fauci discussed how the mitigation efforts were having an effect and said that was why it was so necessary to keep them going.

When a reporter questioned if 100,000 could actually die from the coronavirus, Fauci noted that it is a reality that we have to prepare for, noting the importance of mitigation efforts to keep death counts low. Fauci also discussed how obtaining more data as the weeks go by could impact the modeling projections of potential deaths.

Responding to a reporter's question on when everyone who needs a test will be able to receive one, the president did not provide a definitive response.

It was questioned if whether a holdback of ventilators was contributing to the projected death count of 100,000. The president noted how the government is holding ventilators back for flexibility and that they're set to move them to certain locations.

Another reporter asked if the death count projected in the models would be different if the United States had begun practicing social distancing measures earlier. Birx responded that it wasn't possible to answer the question without getting antibody testing and other samples to determine if the virus was circulating, in what areas and when it came.

Responding to the same reporter, Fauci that "if there was no virus in the backround, there was nothing to mitigate. If there was virus there that we didn't know about, then the answer to your question is probably yes."

The president was asked if he had been giving Americans a false sense of hope with his previous statements regarding the U.S. COVID-19 response. He noted that this is something that is easy to become negative about and that he wanted to give people a feeling of hope. 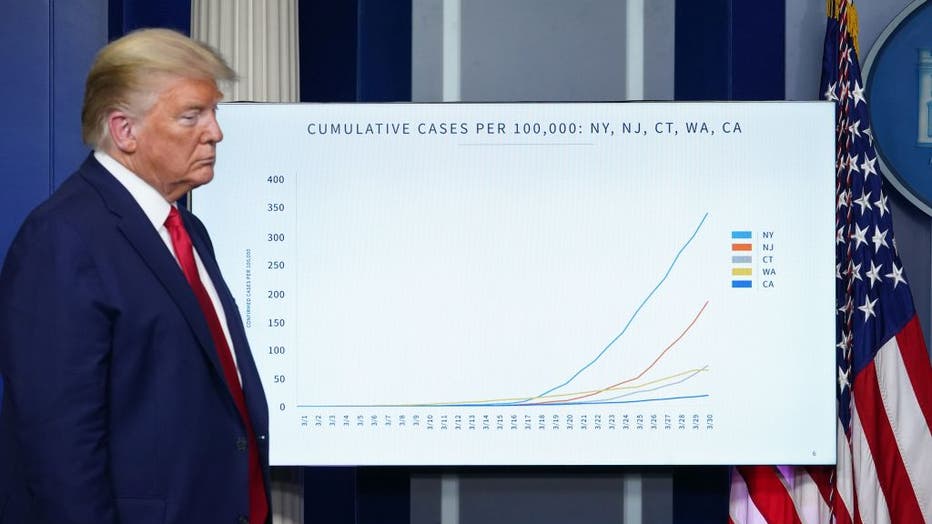 The U.S. death toll from the coronavirus climbed past 3,600 Tuesday, eclipsing China's official count, as hard-hit New York City rushed to bring in more medical professionals and ambulances and parked refrigerated morgue trucks on the streets to collect the dead.

The crisis hit close to home for Gov. Andrew Cuomo, who reported teary-eyed that his brother, CNN anchor Chris Cuomo, was infected.

The governor pronounced the disaster unlike any other the city has weathered: “This is ongoing and the duration itself is debilitating and exhausting and depressing."

Elsewhere around the world, hard-hit Italy reported that the infection rate appears to be leveling off and new cases could start declining, but that the crisis is far from over. Spain struggled to fend off the collapse of its hospital system. Vladimir Putin's Russia moved to crack down on quarantine violations and “fake news” about the outbreak. And China edged closer to normal as stores in the epicenter city of Wuhan began reopening.

Worldwide, more than 800,000 people have been infected and over 40,000 have died, according to a tally kept by Johns Hopkins University. Italy and Spain accounted for half the deaths, while the U.S. had over 180,000 infections, with more dead than China's official toll of about 3,300.

New York was the nation's deadliest hot spot, with about 1,550 deaths statewide, most of them in New York City, which braced for things to get much worse in the coming weeks.